'Juicy bars’ said to be havens for prostitution aimed at U.S. military 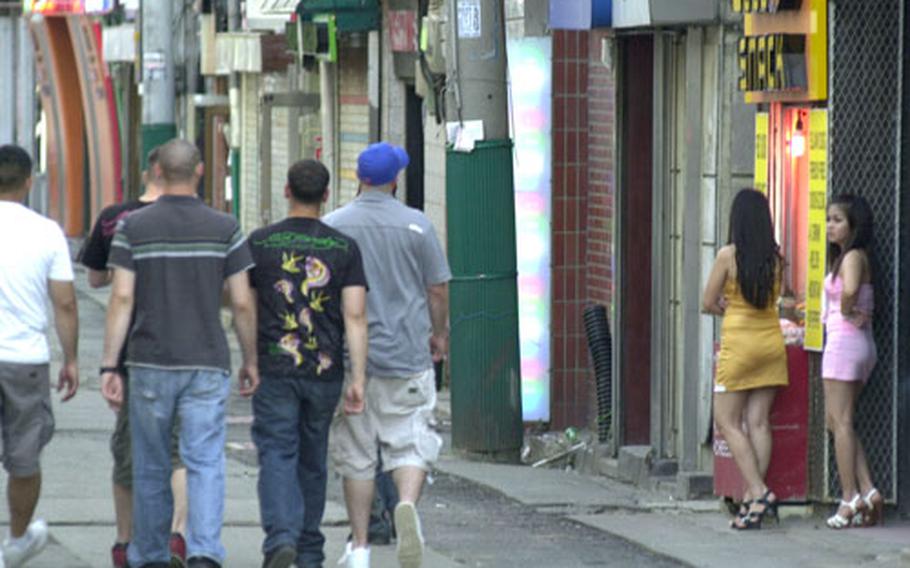 Philippine women stand in the doorway of a juicy bar in The Ville, outside Camp Casey in South Korea. (Jon Rabiroff / Stripes)

Philippine women stand in the doorway of a juicy bar in The Ville, outside Camp Casey in South Korea. (Jon Rabiroff / Stripes) 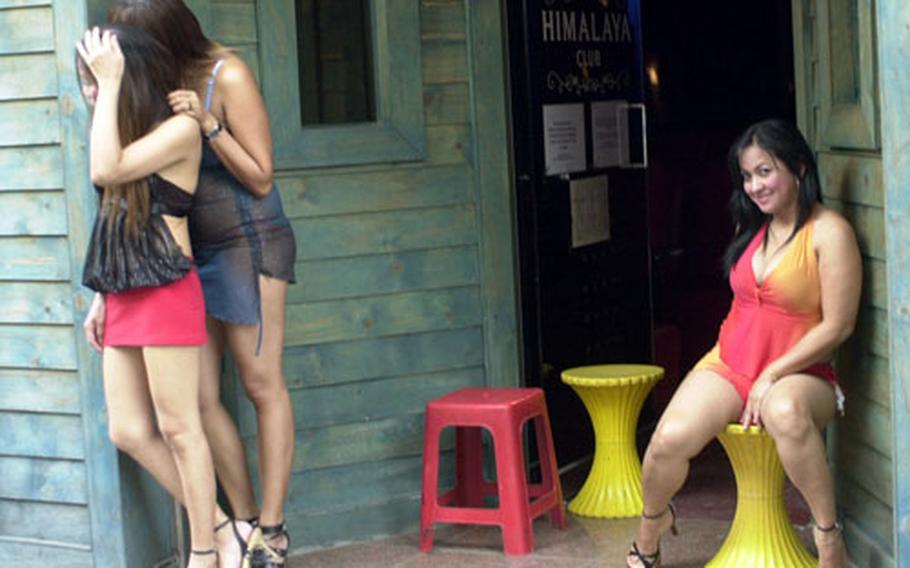 Juicy bar employees hang out in the doorway of one of the 70 such establishments in The Ville. (Jon Rabiroff / Stripes) 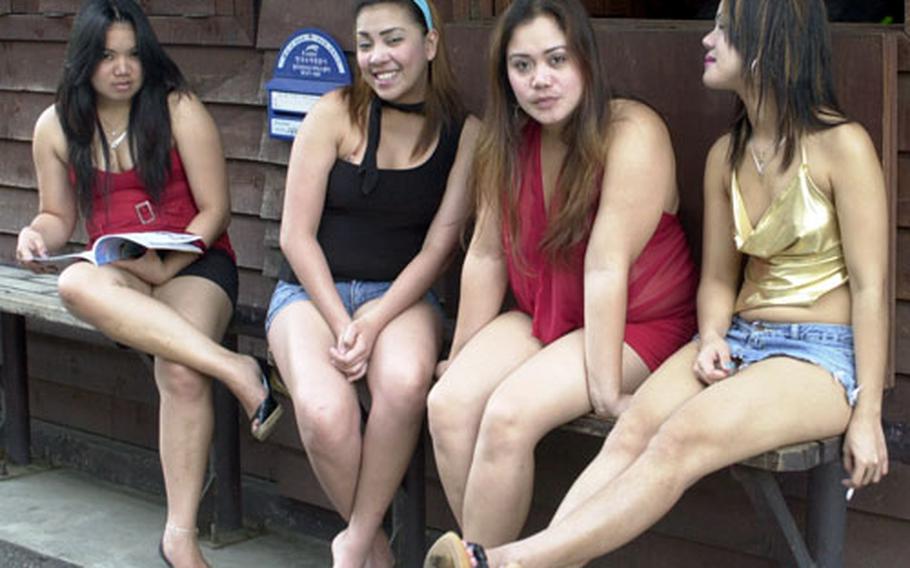 The women who work in the bars try to convince passing U.S. soldiers to come inside, where they keep the men company as long as the soldiers buy them expensive juice drinks. (Jon Rabiroff / Stripes) 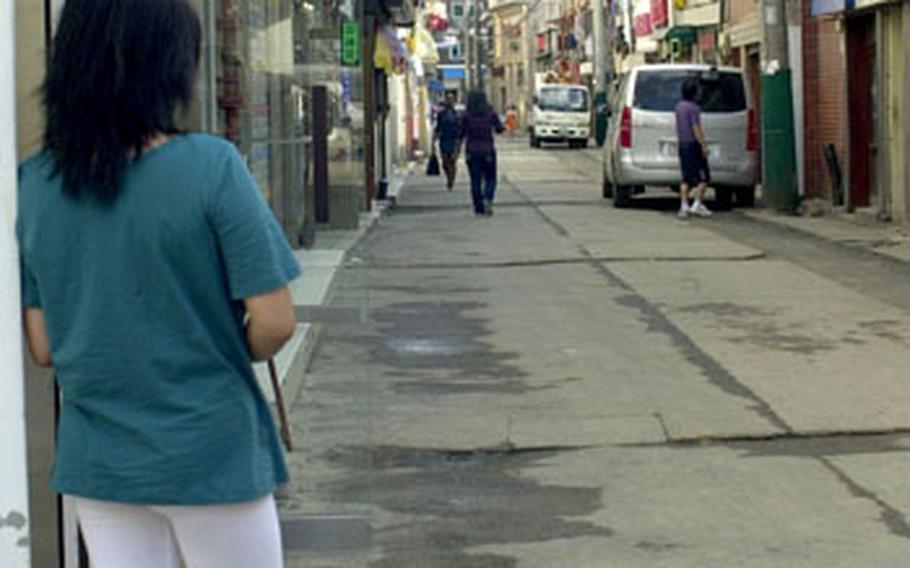 Jenny, left, looks down one of the main roads in The Ville, an area outside Camp Casey in South Korea where she worked at one of the juicy bars and says she was pressured to prostitute herself. She is now three months pregnant and says the father of her unborn child, a U.S. soldier, has abandoned her. "No matter how many problems, or how big the problems that come to me, I have to be strong,” she said. (Jon Rabiroff / Stripes) 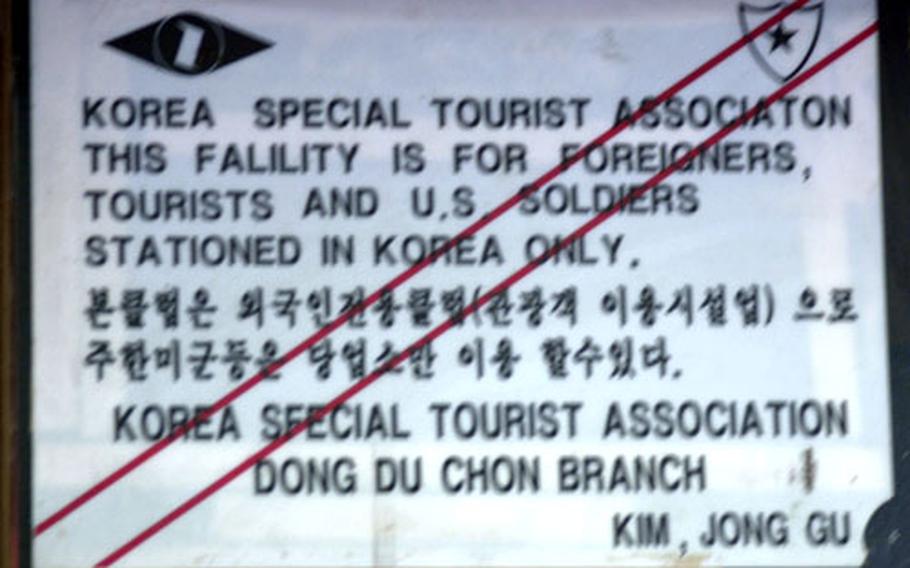 A sign posted on one of the juicy bars in The Ville, outside Camp Casey in South Korea. KSTA bars get tax breaks from the Korean government, but must cater primarily to U.S. soldiers and abide by rules set out by the U.S. military. (Jon Rabiroff / Stripes)

DONGDUCHEON, South Korea - It took less than an hour and $40 in glasses of juice for the pretty young woman working at the noisy bar to offer up her cell phone number and a promise that "the pleasures of a Filipina" could be had for the right price.

As eager young American servicemen from nearby Camp Casey started to fill the bar around her, the woman repeatedly touched a patron suggestively and offered a proposition as thinly veiled as she was scantily clad.

Juice, it turns out, is not all that is sold inside many of South Korea's "juicy bars," the seedy entertainment establishments that commonly cluster near the gates of U.S. military bases across South Korea.

Prostitution and indentured servitude are everyday realities at many of these popular hangouts for American soldiers, according to past and present bar girls, many of whom were enticed from the Philippines to work in the South Korean bars with false promises that they could earn legitimate incomes as singers and entertainers.

"If you don't sell a lot of drinks, [the bar owners] are going to push you to go out with a customer to make money," said Jenny, a former bar girl who asked not to be fully identified. "I was shocked the first night I worked there."

And it's all happening right under the noses of U.S. military officials and the South Korean and Philippine governments, women's advocacy groups assert.

"Three governments are to be blamed for their irresponsibility," said Yu Young-nim, director of My Sister's Place, a social service agency that helps Philippine bar girls forced into prostitution in South Korea. "The Philippine government for not working hard to create job opportunities for its poor people, the Korean government for not managing and controlling jobs [given to immigrants] and the U.S. government for neglecting its responsibility to supervise its soldiers and for not helping these victims."

Officially, none of what often transpires inside the juicy bars is supposed to be happening.

The U.S. Department of Defense has a strict policy against prostitution and human trafficking that requires military officials to "deter activities of DoD Service members, civilian employees, indirect hires" and others "that would facilitate or support [sex trafficking] domestically and overseas."

But no such blanket prohibition exists for juicy bars, despite their history of trouble. About 50 entertainment establishments - U.S. officials don't identify juicy bars or use the term - have been declared no-go zones for U.S. Forces Korea personnel due to prostitution and human trafficking violations. Another 19 outside Osan Air Base were almost added to that list earlier this year for similar reasons before they collectively agreed to clean up their acts.

Still, dozens - if not hundreds - of other juicy bars, like the one outside Camp Casey, have managed to evade sanctions.

The problems are so widespread that the U.S. State Department, in its 2009 "Trafficking in Persons Report," notes that South Korea is a "destination country" for women from the Philippines and elsewhere in Asia, "some of whom are recruited to work on entertainment visas and may be vulnerable to trafficking for sexual exploitation or domestic servitude."

"Does prostitution occur? I imagine it does," said Watson Wallace Jr., civilian misconduct action specialist for the Area I Support Activity Directorate of Human Resources and an affiliate of the USFK Prostitution and Human Trafficking Working Group. "But, we don't authorize it. We don't tolerate it. And, if we find out it is going on, that bar goes off-limits."

U.S. military representatives say they believe most of the juicy bars stick to selling juice - and the few minutes of female companionship that each $10 glass can buy a servicemember. That is why they say they have not put all the juicy bars categorically off-limits.

"There is a constant review, all the time, of all these places," said Charles Johnson, an action officer with the USFK working group. "A decision was made years ago that glass houses were off limits because &hellip; the thought is it is probably an unhealthy or immoral area that lends itself to prostitution. With the other establishments, it's a case-by-case basis."

But there are also powerful economic factors that help keep the doors to the juicy bars open and American servicemen flowing inside.

The juicy bars are a big part of the tourist business in South Korea, and many are officially licensed by the government. About 200 "entertainment establishments" get tax breaks through the Tourism Promotion Act on the condition they cater primarily to foreigners, according to the Ministry of Culture, Sports and Tourism.

And juicy bar owners themselves have political muscle they aren't shy about flexing. Owners of the 19 Osan-area juicy bars threatened with U.S. sanctions protested outside the base and enlisted the help of local political officials. And at Camp Casey earlier this year, juicy bar owners demanded that U.S. military officials do something to prevent American soldiers from wooing away their bar girls with promises of marriage.

Close government scrutiny of the juicy bars is lacking. Officials of Korean government and police agencies said they suspect prostitution occurs inside juicy bars, but none said their agency has primary responsibility for addressing the problem.

"We expect something suspicious is going on there. However, there is no way for us to confirm these offenses," said a spokesman for the police in Dongducheon, home to Camp Casey and the 70 juicy bars nearby in The Ville entertainment district.

"We see this problem very seriously, although this one is a very sensitive issue," another Dongducheon police official said, suggesting any crackdown on the juicy bars would likely cause problems with the bar owners and the U.S. military. Korean police customarily speak without name attribution.

"We are worried about [it becoming a] diplomatic issue," the official said.

The means by which Filipinas are brought to South Korea to work the bars are sanctioned under Korean law. But what many must do to reimburse the promoters and club owners who sponsor them is not always above board or explained to them until after they arrive, according to Yu and two former juicy bar employees.

The process of getting the women to South Korea is extensive and expensive, according to Cho Kyu-moon, president of the Foreign Artist Promotion Co., and Cho Yong-seok, owner of Xanadu, a Camp Casey-area club.

The women are first recruited by promoters in the Philippines. Then, in order to try to qualify for visas as "entertainers," they must record a video of themselves singing, which is sent to the Korea Media Rating Board for review. A spokesman for the Rating Board said judges review as many as 80 videos each day, and less than half the women who submit them are deemed worthy of an entertainer visa.

Cho Yong-seok and Cho Kyu-moon said the women are "sometimes" asked to sing once they arrive in South Korea, but the former juicy bar employees said one would be lucky to even find a microphone in most clubs.

Once the women secure their visas, the 300 or so promoters in South Korea who pay to import them essentially rent the women out to clubs on a monthly basis. According to a variety of sources, the women sign contracts ranging from three months to a year that entitle them to free room and board, and a salary (not including tips) ranging from about 700,000 to 900,000 won - or about $560 to $725 - per month.

Abuse is rampant and many of the women are held in indentured servitude, Yu and the former juicy bar employees said. Often the bar owners seize the women's passports. Sometimes they withhold their salaries, the women said.

Club owner Cho said their jobs "simply speaking &hellip; are to drink together and chat with the soldiers." In exchange, soldiers are asked to buy them drinks, usually starting at $10 for a small glass of juice. The more money the soldier spends on drinks, the longer the woman sits with him, Cho said, adding that the club and the women split the juice money 50-50.

But the former bar employees said they received only a 10 percent cut of the juice money they generated.

Yu said that most juicy bars have a quota system that is linked to the drink purchases, with the women expected to sell anywhere from 200 to 400 drinks per month.

"If you do not sell enough juice, the mama-san who controls the women in the clubs, they force the women to go to the &lsquo;bar fine,'&thinsp;" Yu said. "&thinsp;&lsquo;Bar fine' means prostitution."

The former juicy bar employees said soldiers and other customers usually paid $150 to bring them from the bar to a hotel room for sex, with the women getting $40 of that money.

Jenny said promoters and bar owners "think only about making their money" when they exploit the women.

And soldiers "make the girls run away from the bars &hellip; so they don't have to spend a lot of money in the bars," she added. "They all have bad motives."