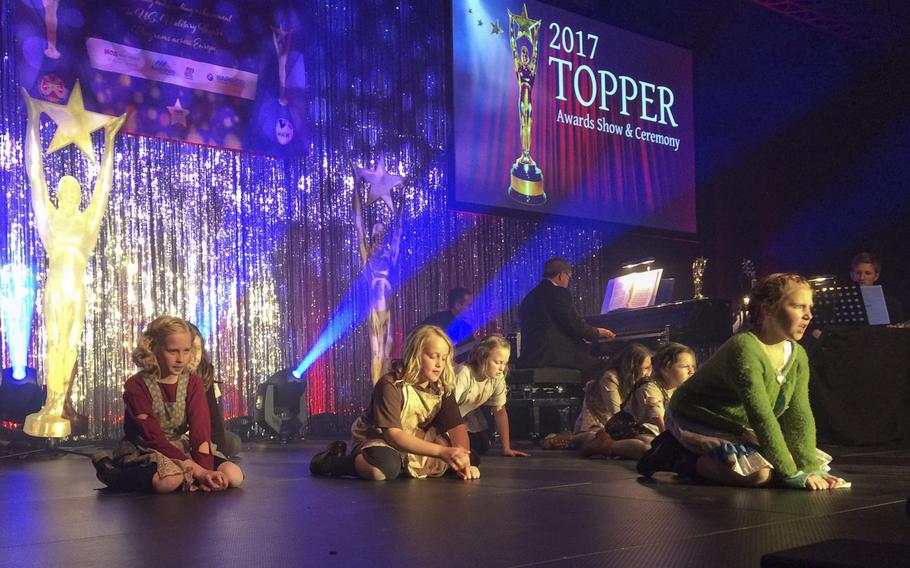 Members of the Wiesbaden Amelia Earhart Playhouse's production of ''Annie'' preform at the 2017 TOPPERS awards in Wiesbaden, Germany, in April 2017. The TOPPERS awards season begins Feb. 23 for military theater programs in Europe. (Dan Stoutamire/Stars and Stripes)

KAISERSLAUTERN, Germany – Performers at U.S. military theaters in Europe will be playing to more than just the crowds when the annual drama competition opens next week.

A team of three international judges will be making the rounds, evaluating 17 plays and musicals from 10 U.S. Army garrisons and Air Force bases in Germany, Belgium, Italy and the Netherlands.

The competition, which runs from Feb. 23 to April 1, marks the 23rd annual U.S. Army Installation Management Command Europe Tournament of Plays, known as TOPPERS. The tournament recognizes outstanding theatrical achievements at bases in Europe, where theater programs - often produced with limited funding and hundreds of volunteer hours - provide military personnel, civilians and family members with a chance to participate in theater.

This year, a judge from Canada and one from Los Angeles will join Dane Winters, IMCOM-Europe’s region entertainment program manager, as adjudicators, Winters said.

While in Europe, the judges will also be conducting free theater workshops in each community. Topics include acting, directing, auditioning, improvisation, youth theater, Shakespeare and play production.

They’ll aim to recognize both performance and technical achievements, including best military and best youth performances and best show, among others.

Nominees and awards in more than 45 categories will be announced at the TOPPERS awards show on April 28 at the Wiesbaden Fitness Center on Clay Kaserne. Winters describes TOPPERS as the Army’s version of the Tony Awards or Oscars.

Some past participants of military theater in Europe have gone on to wider success. Nina Arianda, a 2012 Tony Award winner who currently stars in Amazon’s “Goliath” series, spent several years on stage as a teenager at the old Heidelberg Roadside Theater, Winters said.