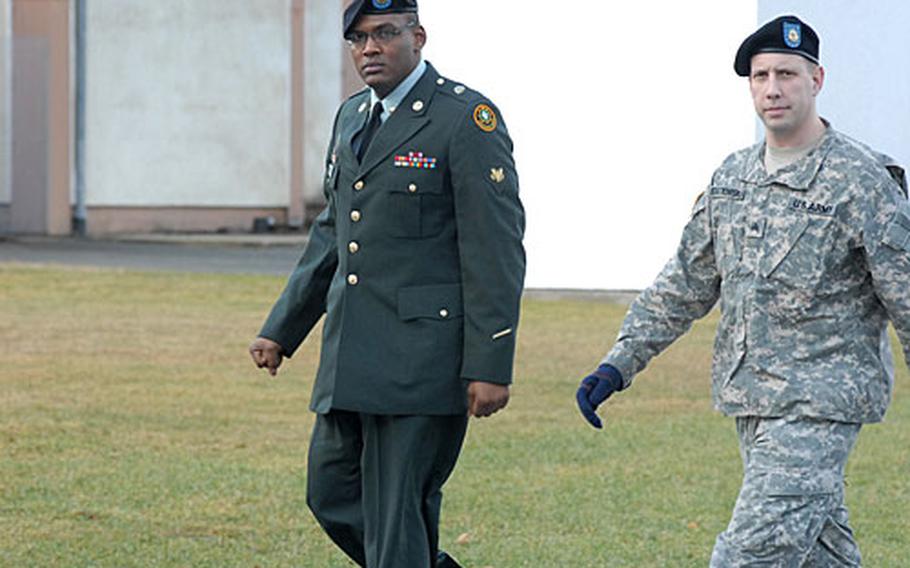 VILSECK, Germany &#8212; Deserting his unit the day before it deployed to Iraq earned a 2nd Cavalry (Stryker) Regiment soldier 11 months in jail and a bad-conduct discharge.

Spc. Loren Barrett, of Headquarters and Headquarters Company, 1st Squadron, 2nd Cavalry, pleaded guilty to two charges of being absent without leave but innocent to a desertion charge during the court-martial Tuesday.

The prosecutor, Capt. Brad Gwillim, told the court that Barrett went AWOL on Aug. 4 and returned on Aug. 13, hours after his unit was scheduled to deploy on a 15-month mission to Baghdad.

Instead of boarding a bus to the airport with his unit, Barrett went AWOL again. He was detained by German police in Heidelberg following an incident with a broken window on Sept. 7, said Capt. Abe Burgess, for the defense.

Burgess argued that the case was about whether Barrett intended to avoid deployment by going AWOL. &#8220;Barrett entered active duty in May 2007 after previously being in the National Guard. He knew what it was to deploy because he&#8217;s deployed before as National Guard. He knew what he was getting into when he joined active duty,&#8221; Burgess said.

Celena Barrett, the soldier&#8217;s mother, told the court that her neighborhood in Chicago is rife with crime and drug abuse.

Burgess said Barrett went home on block leave before the deployment and became concerned about his family. He went AWOL in an effort to help family members, he said.

Capt. Emmanuel Sioson, 1st Squadron&#8217;s rear detachment commander, told the court that, when it deployed, the regiment was short of soldiers with Barrett&#8217;s military occupational specialty &#8212; 25U, communications specialist.

Capt. Elizabeth Talarico, also for the prosecution, argued that he should receive the maximum sentence of 12 months&#8217; confinement and a bad-conduct discharge.

&#8220;If he gets anything less than the maximum punishment, he will be out before his fellow soldiers and teammates are back from hazardous duty,&#8221; she said.

After the judge, Col. Timothy Grammel, found him guilty of desertion, Barrett told the court he&#8217;d wanted to be a soldier since he joined Boy Scouts as an 8-year-old.

&#8220;My family and girlfriend at the time were all living in an area that was not so safe. I felt I needed to step up and protect them. I made poor decisions and want to apologize to my unit for my decisions ... Please let me return to my unit. Please let me deploy.&#8221;

However, Grammel did not let Barrett deploy. He sentenced him to 11 months&#8217; confinement, reduction in rank to private, forfeiture of $893 per month in pay and a bad-conduct discharge.