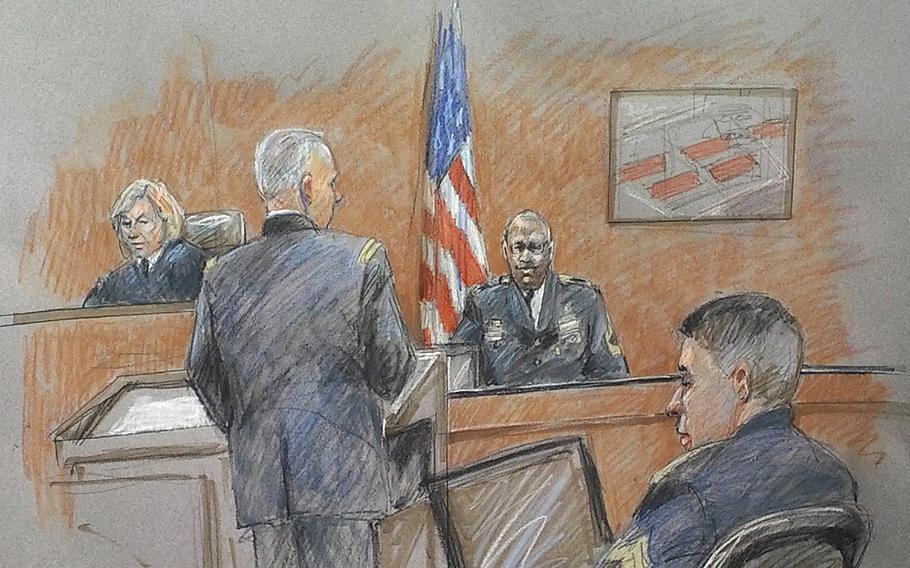 A photo of a courtroom sketch shows testimony being given during the trial of Army Maj. Nidal Hasan, accused of killing 13 and wounding dozens more in a shooting rampage at Fort Hood, Texas, on Nov. 5, 2009. (Sketch by Brigitte Woosley, Photo of sketch by Jennifer Hlad/Stars and Stripes)

FORT HOOD, Texas — The judge in the murder case against Maj. Nidal Hasan cleared the courtroom Wednesday morning to talk to Hasan privately, then recessed the court-martial until Thursday, after Hasan’s defense team filed a motion to not be compelled to help him if he seeks the death penalty.

Lt. Col. Kris Poppe told the judge that Hasan’s legal team — serving as standby counsel while Hasan represents himself — is ready to help Hasan, but only if he chooses to fight the death penalty.

Poppe said the team thinks Hasan is actively working to get the death penalty, and they do not want to be forced to assist him in “what we believe to be repugnant.”

Poppe said Hasan’s goal became “crystallized” to them yesterday, after Hasan’s opening statement and the first day of testimony.

Hasan told judge Col. Tara Osborn that Poppe’s assertion is “inaccurate,” but Osborn stopped him and cleared the courtroom for further discussion, to prevent Hasan from discussing privileged information in front of others. Twenty minutes later, Osborn put the trial on recess for the rest of the day.

Richard Rosen, a former Army lawyer and current professor of law at Texas Tech University, told reporters he believes Osborn is trying to protect the integrity of the trial, so that it cannot be overturned. Stopping Hasan from revealing privileged information may have prevented a mistrial, he said.

Rosen, who served 26 years in the Army, said he has “never seen anything like” this trial. He said he isn’t sure what Hasan’s goal is, but “his opening statement certainly wasn’t helpful.”

Hasan said during his opening statement that the evidence will show he is the shooter that killed 13 people and wounded more than 30 others.

Pale and with an unkempt beard, Hasan was wheeled into the courtroom Wednesday wearing an Army-issue green fleece cap and an Army sweater under his ACU blouse. He removed his hat when the judge came in the packed courtroom, with several family members of victims in attendance.

Hesco barriers and a line of stacked pale gray Conex boxes surround the court building, blocking the view from the street.

In testimony on Tuesday, several witnesses described the events of Nov. 5, 2009.

When she heard the gunshots, Michelle Harper thought it was firecrackers; someone was playing a terrible joke. Seconds later, she was huddled under a desk near a wounded Pfc. Michael Pearson as he took his last breaths.

Harper had worked at the Soldier Readiness Processing center at Fort Hood for six years, drawing blood for soldiers getting ready to deploy and coming back from deployment. She was talking to a friend in the vaccination area of the center when they heard the shots. When they went to look, she testified Tuesday, someone yelled “get down!”

Harper testified that she didn’t see the shooter as a routine day turned into chaos. She dove for cover under a desk, along with several others, and dialed 911.

On the recording, which was played Tuesday afternoon in the courtroom, Harper can be heard crying and shrieking, begging for help as the operator assures her that police and firefighters are on their way. Gunshots boom in the background, repeatedly stopping the operator’s attempts to calm Harper and make sure she is safe. At one point, the fatally wounded Pearson moans loudly near the phone.

After a few terrifying and chaotic moments, Harper managed to get out of the building and run behind a row of cars to her own vehicle, still on the 911 call. From the parking lot, she said, she saw Maj. Nidal Hasan — whom she recognized from drawing his blood — and a female police officer in a gun battle.

Staff Sgt. Alonzo Lunsford also worked in the SRP clinic, and testified Tuesday that he met Hasan a few weeks before the shooting, when both were on duty at the base hospital. The week of the shooting, Hasan came into the clinic several times, Lunsford said, passing by a dry erase board that listed the schedule of units coming through in preparation for deployment.

On Nov. 5, Lunsford said he had returned from lunch and noticed the 45-chair waiting area was at capacity – with Hasan sitting in the last chair, bent over, looking at the floor.

Hasan got up, talked to a civilian data entry clerk, and she left, Lunsford said. Then, Hasan yelled, “Allahu akbar,” reached inside his camouflage utility blouse, pulled out a weapon and began firing at the other soldiers in the waiting area.

“We’re in a state of shock at first,” Lunsford said. “It was a state of panic.”

Lunsford stayed calm and composed on the stand as he described how he went into “an E and E mode, escape and evasion.”

Lunsford’s friend, retired soldier Michael Cahill, tried to hit Hasan with a chair, he said, but Hasan shot and killed him. Several soldiers in the waiting area tried to hide behind the scattered folding chairs, while others crowded near the back doors, trying desperately to get out, Lunsford said.

Meanwhile, Lunsford crouched behind a counter, plotting a sprint to the exit. He glanced behind him, and “as I’m checking my six, Major Hasan is turning the laser on me.”

“The laser goes across my line of sight and I blink … the first round, I’m hit in the head,” Lunsford said. “I’m trying to low crawl to get behind a desk, and I’m hit in the back.”

Lunsford couldn’t see out of his left eye because of all the blood from his head wound, he said, but he managed to get outside — where Hasan shot him five more times.

Hasan chose not to question Harper, Lunsford, or most of the other witnesses who testified Tuesday, the first day of his court-martial. Hasan, who is representing himself, could face the death penalty if convicted.

In his brief opening statement, a bearded Hasan told jurors “the evidence will clearly show that I am the shooter,” but said the “evidence presented will only show one side.”

Hasan referred to himself as part of the Mujahedeen and said they are “imperfect Muslims, trying to establish the perfect religion. I apologize for any mistakes I made in this endeavor.”

Mohamed Salim, a man Hasan knew from the Killeen Islamic Center, said he saw Hasan the morning of Nov. 5 and that he had said he “was going on a journey.” He also asked Salim to excuse any wrongs Hasan may have done to him.

“I didn’t find it very odd, I knew he was deploying,” Salim testified Tuesday. “I thought maybe he was going home, that he was just saying goodbye. … It made a difference after the events that had been during the day.”