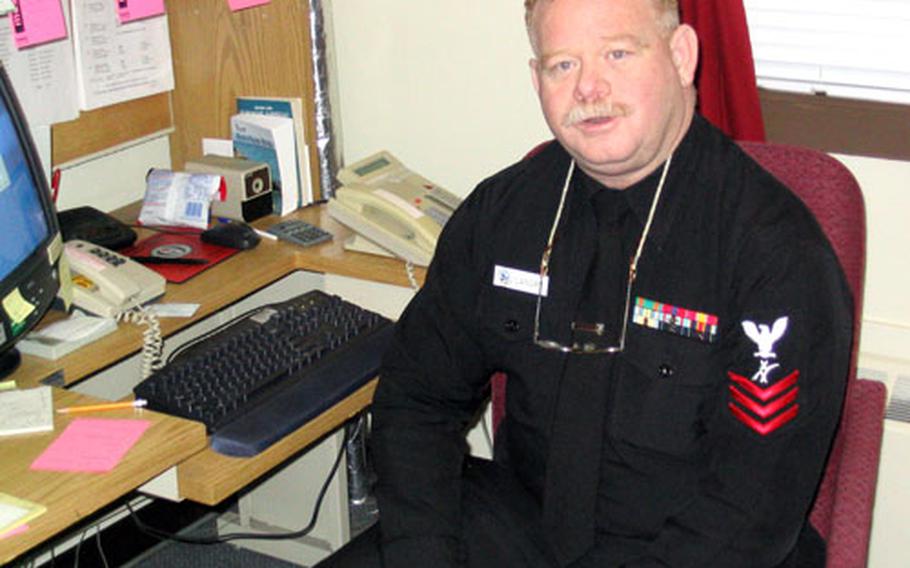 As a civilian in Vinton, La., Danny Landry is an elected civil judge, but as a member of the Naval Reserves he is Petty Officer 1st Class Landry. (Greg Tyler / S&S)

SASEBO NAVAL BASE, Japan &#8212; Given how most offices are organized, visitors typically talk first with a receptionist or clerk.

Back home in Vinton, La., about 45 miles east of the Texas border, Danny Landry is an elected civil judge on the state payroll.

As a 48-year-old member of the U.S. Naval Reserve, Petty Officer 1st Class Landry is a legalman who arrived in southern Japan on Jan. 12 for duty at Sasebo through May 28.

Vinton, population 7,200, is where Landry built a home and lives with his wife and five children.

He smiles almost continuously and said he thoroughly enjoys having a Naval Reserve job classification in the same field in which he works as a civilian.

Landry is two years into his second consecutive six-year term as a judge. He hears civil cases in Calcasieu Parish, population 182,000, involving property worth $3,000 or less.

He&#8217;s served in the Naval Reserve for 16 years. Until he also became rated as a legalman two years ago, he was rated as a storekeeper.

Before becoming a judge, he had a law enforcement career in Texas.

The requirements for the judgeship he holds do not include a law degree &#8212; just that a person be at least 35, a U.S. citizen and a registered voter.

&#8220;But you also have to have a thorough working knowledge of Napoleonic Law,&#8221; Landry said. Louisiana, a former French colony, retains a judicial system based on that French legal code.

The other 49 states&#8217; legal systems are based on English common law, a system emphasizing court procedure and precedent. Napoleonic Law takes a civilian law approach, in which the judge&#8217;s job is more to interpret intent than to follow judicial precedent.

Landry is the second Reservist to fill the slot since the active-duty legalman who&#8217;d filled the slot retired last year.

&#8220;The Reserve support we&#8217;ve had here has just been fantastic and having him here with his experience as a judge is a great situation for us,&#8221; said Lt. Mary Thompson, a Sasebo NLSO attorney.

&#8220;He really brings a new and unique perspective to our office because of his position. He&#8217;s very knowledgeable and keeps things moving along like clockwork. We just love having him.&#8221;

Landry also is a Roman Catholic music administrator in Louisiana, traveling around a large segment of the state helping churches enhance, and sometimes create, music programs.

He&#8217;s exercised his musical abilities in Sasebo by volunteering to create a youth choir in conjunction with the Chaplain&#8217;s Office.

&#8220;He had the new Youth Choir singing in just a matter of a few weeks &#8230; his presence here has truly elevated our worship through music.