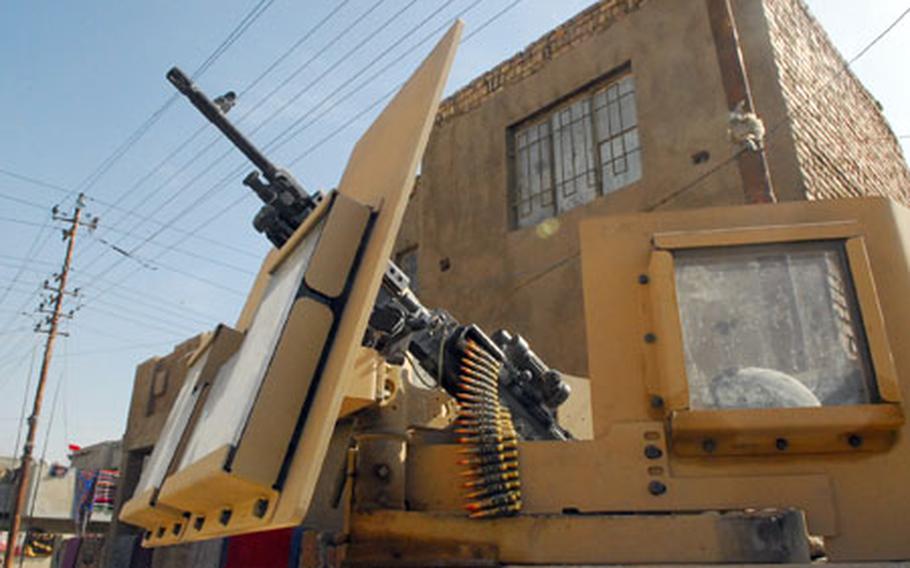 An Army machine gunner hunkers down in the turret of a Humvee while on patrol in East Baghdad recently, his helmet barely visible through the armored glass. Days earlier, a sniper had shot and killed another gunner in his platoon. (Monte Morin / S&S)

An Army machine gunner hunkers down in the turret of a Humvee while on patrol in East Baghdad recently, his helmet barely visible through the armored glass. Days earlier, a sniper had shot and killed another gunner in his platoon. (Monte Morin / S&S) 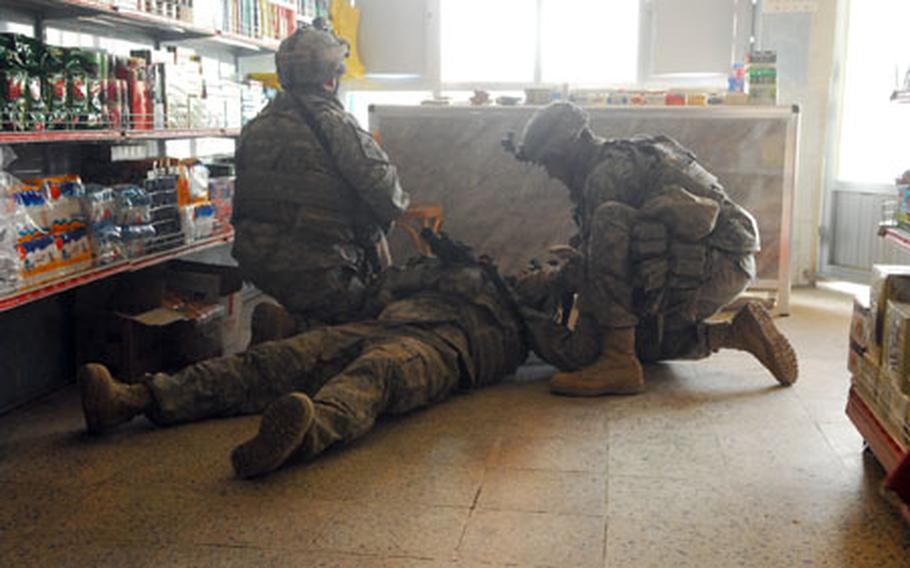 A soldier attached to the 2nd Brigade Combat Team, 2nd Infantry Division, lies on the floor of an East Baghdad market recently after being sprayed by glass from a bullet that shattered the shop&#39;s window. The soldier, who at first thought he had been struck, was uninjured. The bullet was either fired by a drive-by gunman or a sniper while the soldiers were on patrol. (Monte Morin / S&S)

BAGHDAD -- In a country where rumors exist as fact, and in a war where initial reports are often wrong, there seemed to be little stopping the legend of Juba the Sniper.

Islamic militant Web sites, comics, bootleg videos and songs had, for almost two years, touted the deadly prowess of the &#8220;Qannas Baghdad,&#8221; the apocryphal insurgent sniper credited with killing scores &#8212; some say hundreds &#8212; of U.S. and Iraqi troops in every quarter of Iraq&#8217;s capital.

Like a wartime boogeyman, Juba had twice been reported captured, only to spring up again, Freddie Krueger-style, in Jihadist propaganda and U.S. military patrol briefings.

&#8220;Yes, he is real,&#8221; insisted &#8220;Bobbie,&#8221; an Iraqi interpreter who has worked with U.S. troops in Baghdad for two years. (Iraqi interpreters working for U.S. forces often do not give their real names for fear of reprisal from insurgents.)

In the last several months however, tales of Juba have all but vanished.

To the believers, Juba was killed or captured. To those who never believed the tales, the explanation is that Juba was a fad that ran its course.

While spokesmen for the U.S. military have long denied the existence of Juba, rumors had nonetheless filtered down to ground troops. For them, the tales only exacerbated a very real threat. By some accounts, Juba cruised the capitol&#8217;s streets tucked in the trunk of an auto, like the mysterious D.C.-area sniper of 2002, firing at victims through openings in the trunk.

In others, the Dragunov-toting Juba often left a taunting calling card proclaiming, &#8220;What has been taken in blood cannot be regained except by blood &#8212; The Baghdad Sniper.&#8221;

Skeptics held that Juba was not one, or even several snipers. Instead, he was the product of hype and fear on the part of U.S. soldiers, as well as enemy propagandists who hope to sap the troops&#8217; morale.

Hobbs, whose company is part of the 2nd Brigade, 10th Mountain Division, likens the Juba legend to those rumors circulated in the early months of the war of crack Chechen snipers lurking throughout the country.

To be sure, insurgent snipers have exacted a toll on U.S. and Iraqi troops from Anbar province to Baghdad.

After a relatively peaceful start to the Baghdad security plan &#8212; a campaign aimed at quelling the ages-old animosity between Shiite and Sunni Muslims here &#8212; snipers have re-emerged as a deadly presence.

In the 9 Nissan Security District of New Baghdad, where attacks and murders had dropped by an incredible 70 percent during the first two months of the security plan, commanders say they are encouraged by the willingness of residents here to share information with soldiers who have moved into neighborhood combat outposts.

But with the recent sniper deaths, as well as an increase in attacks by explosively formed projectiles, or EFPs, troops are saying that the honeymoon is over.

At the colorfully named Cobra Cabana &#8212; a deserted potato snack factory that now serves as a combat outpost in New Baghdad &#8212; soldiers and officers said they were anticipating a violent April, now that radical cleric Muqtada al-Sadr has renounced an earlier call for followers to lay down arms. And with that violence, a possible return of Juba the Sniper.

As Rosen&#8217;s troops busily fortified the cavernous factory recently, soldiers speculated on the sniper threat. Juba or no Juba, they said they plan to keep their heads down.