JSA links offers chance to take whack at the enemy 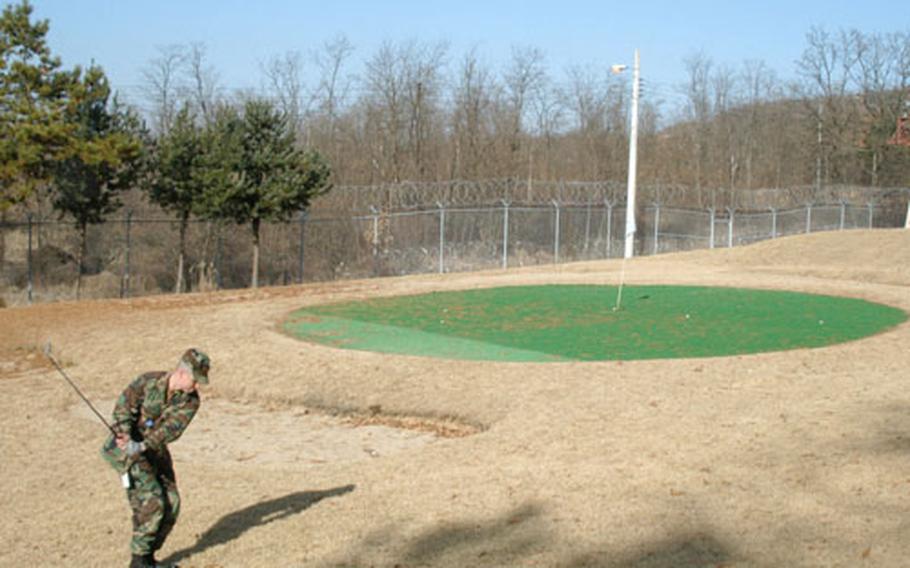 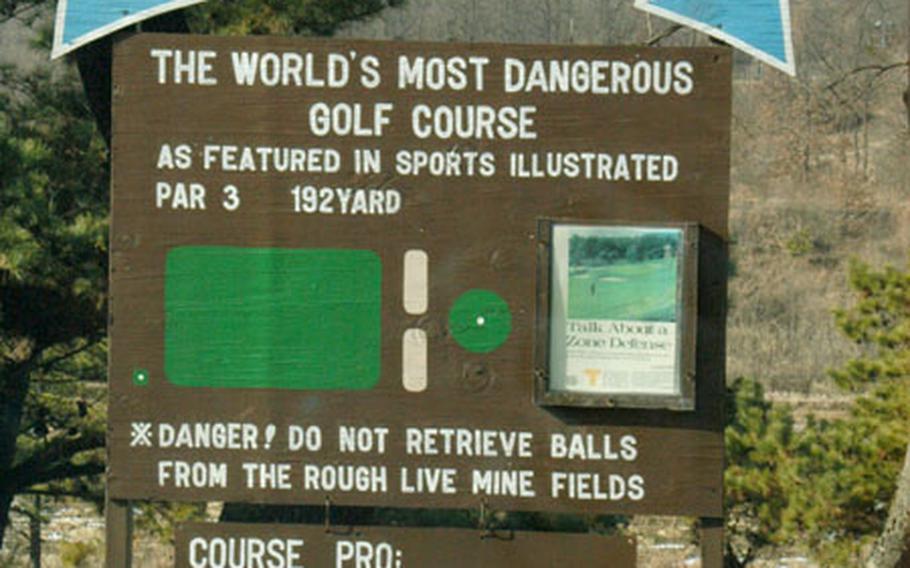 The sign says it all: Welcome to the World&#39;s Most Dangerous Golf Course at Camp Bonifas, South Korea. (Seth Robson / S&S)

The course got its name because, until recently, it was surrounded on three sides by minefields and sits a stone&#8217;s throw from the world&#8217;s most heavily fortified border.

Benitez is the local golf professional, an honor gained by virtue of his appointment as Bonifas XO.

He started playing at Fox Bend Golf Course in Oswego, Ill., and honed his skills on military courses such as Fort Hood&#8217;s Clear Creek in Texas, Fort Leavenworth&#8217;s Trails West in Kansas and Fort Benning&#8217;s Pineside and Lakeside courses in Georgia.

The main difference between those courses and The World&#8217;s Most Dangerous Golf Course &#8212; aside from the explosives &#8212; is length and the quality of the putting surface.

Fox Bend, for example, boasts 18 holes and grass on its greens. The Bonifas course has just the par-three ending in a green made of artificial turf.

Benitez played a modest 18-handicap on those courses but at Bonifas his best round so far is birdie, which extrapolates to a phenomenal 54 on a par-72 18-hole course, or a handicap of -18.

He warms up for a quick &#8220;round&#8221; by hitting balls over the fence in the direction of North Korea. His shots travel a long way &#8212; but not far enough to trouble the communists on the other side of the DMZ.

If, by a twist of fate, one of the balls ever did make it to North Korea, the locals probably would greet it with bemusement: They&#8217;re rumored to be golf atheists, rejecting the game as an elitist sport and an expression of Western decadence.

Benitez appeared willing to live with that.

A razor-wire fence separates the fairway&#8217;s left side from a rice paddy and, several hundred yards to the north, the DMZ. Clearly visible, rising out of the foliage in the middle distance, are guard posts manned by South Korean soldiers. Two more guard posts, part of the Camp Bonifas security perimeter, watch over the course.

The out-of-bounds paddy is farmed by a family from nearby Tae Song Dong (Freedom Village), who are more at risk from errant golf balls than from mines, which have been completely removed from the area, Benitez said.

These days, soldiers even put together recovery squads to collect golf balls missing in action from the formerly off-limits, out-of- bounds areas.

&#8220;You could probably find a few that we missed over the summer because the grass was a lot longer then,&#8221; Benitez said, hitting another heavily sliced three iron into a clump of trees far to the right of the fairway.

Benitez said he enjoys the sport because it&#8217;s an opportunity to compete.

&#8220;Golf is a thinking man&#8217;s or woman&#8217;s game. It is a very technical sport and you have to have patience and sometimes you have to make adjustments in your technique. You can make a parallel between golf and the military,&#8221; he philosophized before sending his third, fourth, fifth and sixth shots the same way as the first two.

&#8220;In the military we have to have the ability to make adjustments and decisions and we are constantly thinking of trying to improve.&#8221;

Benitez finally reached the fairway with his seventh tee-shot, a low slice that, like a bullet from an M-16 striking an armored Humvee, ricocheted off a pine tree and finished a good 40 yards down the fairway.

Have any famous golfers challenged The World&#8217;s Most Dangerous Golf Course?

Benitez isn&#8217;t aware of any golfing luminaries willing to put their skills to the test in the JSA, but a few celebrities have teed off while visiting Bonifas on USO tours.

Part of the professional&#8217;s job is organizing a DMZ Golf Classic each year.

The Classic includes a long- driving competition that, like Benitez&#8217;s warm-up, involves whacking balls in the direction of the North Koreans. The goal is to hit a large orange flight marker that informs pilots they&#8217;re approaching the DMZ.

Another competition is Combat Golf, in which teams armed with Multiple Integrated Laser Engagement System gear have to play the hole with the added distraction of an enemy force hidden at various places along the fairway. Organizers added sound effects and smoke bombs this year to simulate actual combat golf conditions.

As the club professional, Benitez is responsible for maintaining the course. In recent days, the fairway has been in excellent condition, but the green needed work. The artificial turf was wrinkled, making putting difficult.

That didn&#8217;t stop Benitez &#8212; who reached the green with his 15th shot &#8212; from nailing a 20-foot putt that defied the laws of physics by gliding 2 feet past the cup, then reversing direction and rolling in.

Lt. Col. Matt Margotta, Camp Bonifas commander, is widely regarded as the best golfer in the JSA and regularly pars or birdies the course, Benitez says. Margotta won the long-drive competition this year and the team combat golf event last year with his son.

The golfing commander says the course is an important part of Camp Bonifas.

&#8220;You miss your golf, but because of the operational requirements up here we never get the chance to leave. We make do with our one-hole course,&#8221; Margotta said. &#8220;It&#8217;s not much, but given the lack of things to do up here for recreational purposes, it serves a need, and the soldiers enjoy it.&#8221;

What advice would Margotta give to anyone game enough to test their skills on The World&#8217;s Most Dangerous Golf Course?

Margotta enjoys passing on his wisdom to aspiring young golfers assigned to the JSA.

&#8220;Grip and stance are the most important things. You have to have those two things right,&#8221; he often tells them.

However, he says his men do not need lessons to enjoy the golfing opportunities at Bonifas.

&#8220;You see guys who have never swung a club in their life. They will pick one up and swing it like a baseball bat, but they actually hit the ball. They seem to get more of a kick hitting golf balls at the DMZ than hitting at the hole.&#8221;