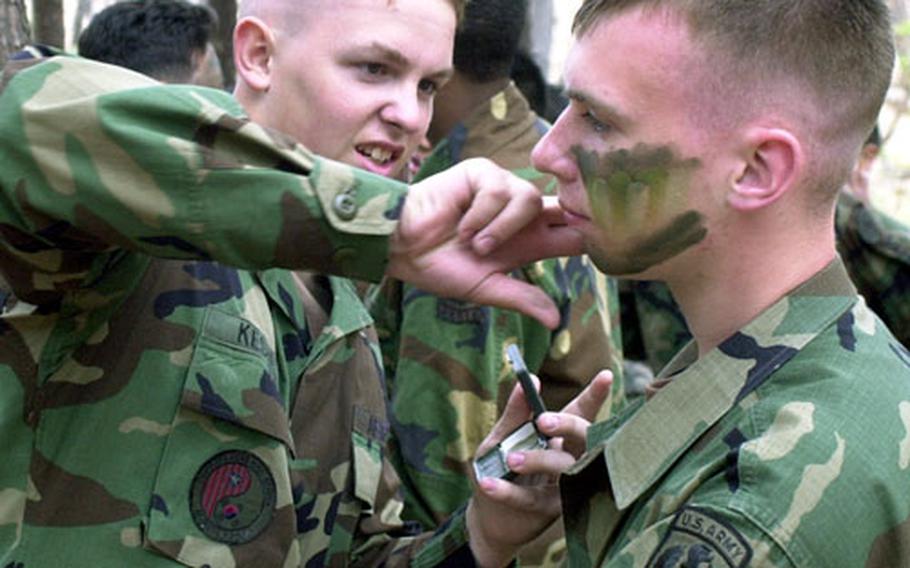 CAMP JACKSON, South Korea &#8212; Some parents might rather undergo dental surgery than try to wake up their teenagers before 11 a.m. during spring break.

Parents of the 33 teens at Camp Jackson last week didn&#8217;t have to blast their young out of bed; the Army did it for them.

Not that most of the high school students in the Junior Reserve Officer Training Corps needed much prodding. They volunteered to spend their vacation week learning about soldiering skills such as land navigation, battlefield tactics and physical training.

While it wasn&#8217;t quite at boot camp level, the week-long event was run by non-commissioned officers who didn&#8217;t coddle these high schoolers. Each woke at 4 a.m., quickly cleaned up and put on cammies.

They also allowed him to learn that much more about soldering, he said.

&#8220;I want to get some leadership experience and see how life is in the Army,&#8221; said Durrough, son of retired Sgt. Maj. Bryan Durrough.

Durrough and the others each took turns in mock leadership roles, playing platoon leaders or non-commissioned officers during some exercises.

The real NCOs in charge say they don&#8217;t run the camp like drill instructors &#8212; after all, their charges are high school students, not new recruits. However, they do have some latitude to be firm without being outright scary.

That difference makes this camp a learning experience for Staff Sgt. Gerald Emery as much as for the students, he says. As an NCO Academy sergeants instructor, Emery isn&#8217;t used to receiving questions like, &#8220;Why?&#8221; when telling soldiers what to do.

The camp emphasis is on team building and working together to complete tasks, Emery said.

That philosophy has instilled new confidence in students like ninth-grader Brett Hansen, who said that going in, he expected the juniors and seniors would leave him in the dust.

The students had some time during the week to check back with their parents and guardians but most of their days were packed with activity.

Durrough says he spent his 30 minutes to one hour of free time each day on chores like cleaning the latrine or making his cot. Giving up leisure time gave Durrough something many parents may dream about their teenagers receiving: perspective.