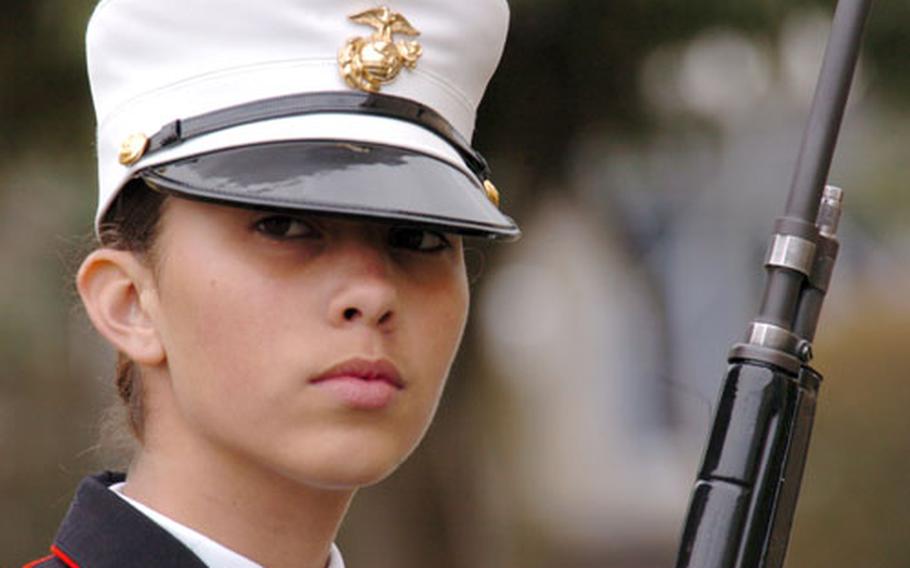 Hosted at Yokota Air Base for the second year in a row, the meet brought together cadets from each of the four services&#8217; Junior Reserve Officers Training Corps programs from high schools throughout the Pacific.

The three-day event kicked off Monday with a marksmanship competition for both air rifles and pistols, as well as fun shooting challenges such as &#8220;shoot the hole in the Life Saver&#8221; and the modified biathlon.

On Tuesday, however, the competition took a more serious turn as the cadets began the day with a full uniform inspection followed by several hours of marching and drilling. Considered by many to be the bread and butter of JROTC, the drill and ceremony portion of the meet also was the favorite of many cadets.

&#8220;The competition here is intense,&#8221; said Maria Arismendez, an Air Force JROTC first lieutenant cadet from Robert D. Edgren High School at Misawa Air Base, Japan. She explained that her team practices two hours every day after school and sometimes holds eight-hour practice sessions on weekends, a pace that seemed to be the norm for many of the competitors.

One of the judges for the armed drills portion of the event, Navy Lt. Jack Nafpliotis, explained why all the practice is necessary.

In addition to examining the posture and technique of the drill team, Nafpliotis said he also was looking at how the commander gives commands, how teams execute them and how well their movements are synchronized.

However, the competition, as well as JROTC as a whole, is not all about marching and inspections. It also is a learning experience, according to those involved.

Cadet Cmdr. Jade Prudente, a senior from Guam High School, said that after a few years in JROTC, she moved past the ribbons and marching to become more interested in the leadership and team-building aspects of the program.

&#8220;Interacting with the younger cadets as they learn has been an excellent experience,&#8221; she said, adding that being in JROTC has helped her realize her goal of attending the U.S. Naval Academy. Last fall, she learned that she has been accepted into the Naval Academy&#8217;s Preparatory School.

The meet was to wrap up Wednesday with physical fitness competitions in the morning and an awards dining-in at the Yokota Officers&#8217; Club in the evening.