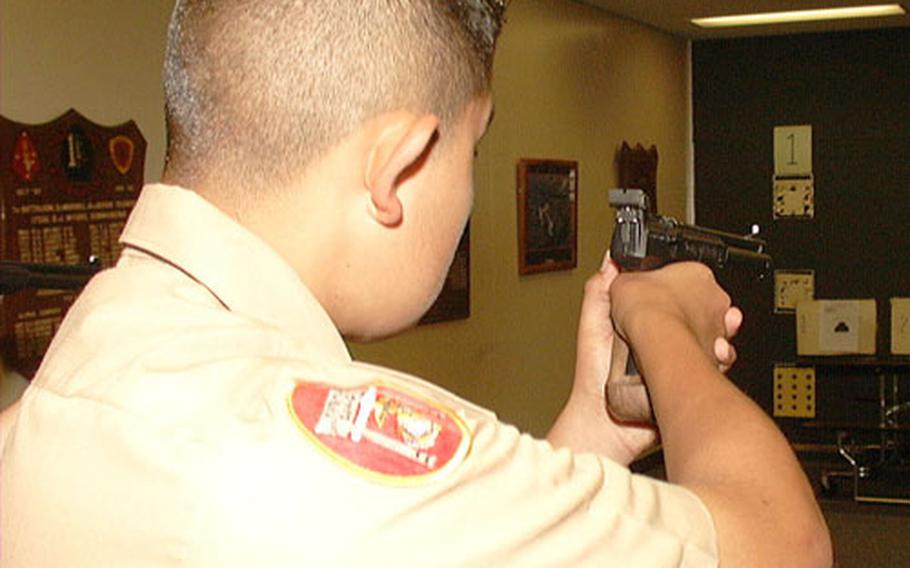 Careful concentration, slow and steady pressure on the trigger and a bit of luck all go into the Kubasaki High School Marine JROTC pistol qualifications on Okinawa. (Mark Oliva / S&S)

Careful concentration, slow and steady pressure on the trigger and a bit of luck all go into the Kubasaki High School Marine JROTC pistol qualifications on Okinawa. (Mark Oliva / S&S) Marine JROTC cadets from Kubasaki High School earn points toward their grade in the JROTC course, as well as marksmanship badges they&#39;ll carry through next year&#39;s course of studies. (Mark Oliva / S&S) 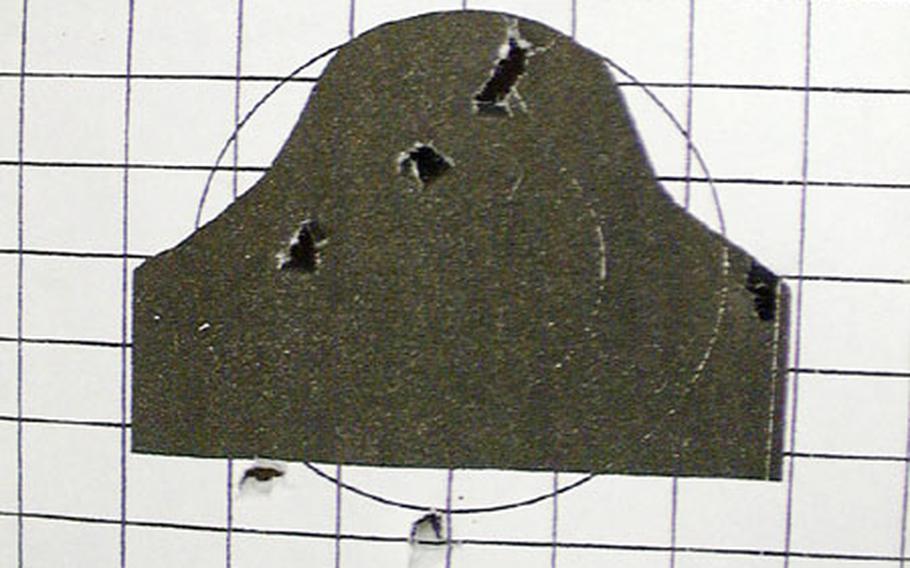 CAMP FOSTER, Okinawa &#8212; Joseph Middlebrooks squinted. He shifted his weight from one foot to another. He held his breath for a moment before letting it out in a slow, steady stream. This was test day &#8212; all or nothing at Kubasaki High School.

Joseph, however, gripped not a pencil but a single-shot air pistol.

The 18-year-old senior smoothly squeezed the trigger. The impact rang from the .177 caliber pellet crashing into the back of the pellet trap, leaving the telltale tear in the paper. The shot was a bit high. Joseph knew he had to do something few other students must do to get a better score: lower his sights.

Kubasaki&#8217;s Marine Junior Reserve Officer Training Corps cadets were wrapping up pistol marksmanship qualification, one of the final events before school lets out next month and one of the more unusual classroom activities found today in any American high school: firing weapons.

Kubasaki&#8217;s JROTC holds the pistol qualification annually and while most high schools grapple over keeping guns out of schools, JROTC students are graded on their ability to shoot.

All the air pistols are kept under lock and key, Glenn said, and all shooting is done under JROTC instructors&#8217; strict supervision. Still, students themselves are the final safety factor.

Many of the students who go from JROTC programs to college ROTC gain an advantage over other students, Glenn said.

Students fire 10-round strings, counting shot holes to tally scores. The closer the shot hole to the target&#8217;s black center, the higher the score. Shooters with scores of from 12 to 18 are marksmen; 19 to 23 are sharpshooters. Scores of 24 to 30 nab the coveted expert marksmen&#8217;s badge.

But actual scores don&#8217;t factor into grades as much as getting up to the firing line and taking a turn at something new.

Grades and safety rules aside, cadets indicate the pistol qualifications are, at the core, a fun event.