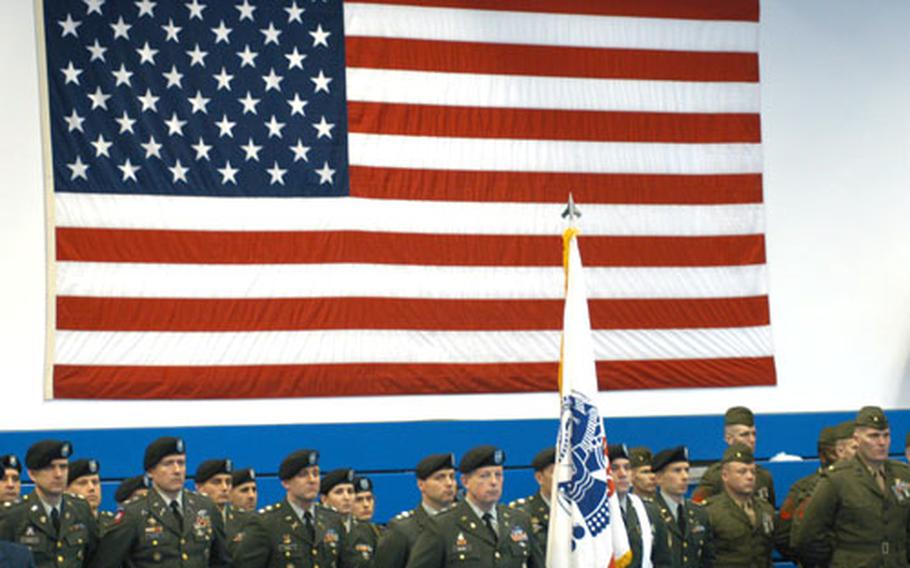 Soldiers of the United States European Command stand in front of a giant American flag at the EUCOM change of command ceremony in Stuttgart. (Michael Abrams / S&S)

Soldiers of the United States European Command stand in front of a giant American flag at the EUCOM change of command ceremony in Stuttgart. (Michael Abrams / S&S) 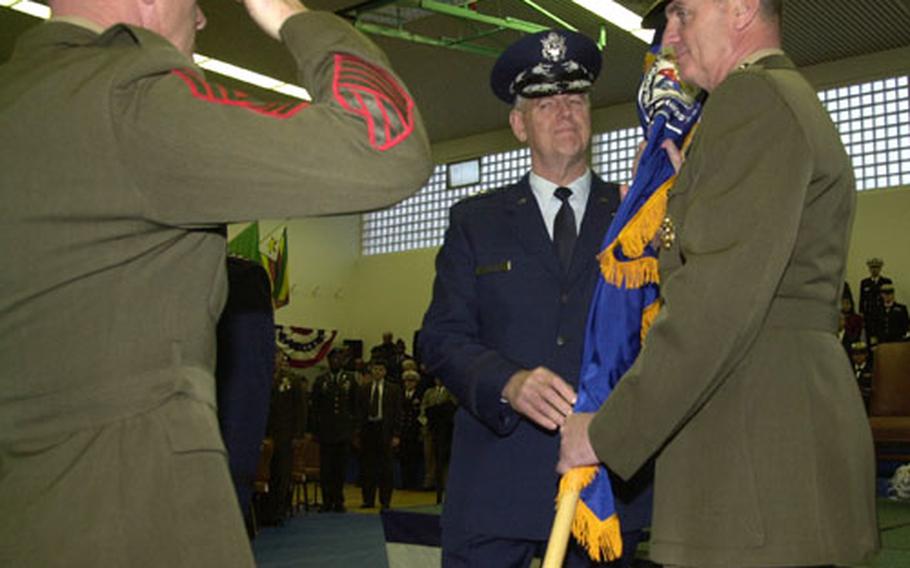 On Friday, he will become the Supreme Allied Commander Europe, leader of the North Atlantic Treaty Organization military force. Historically the commander of EUCOM has also held that post.

&#8220;These are very difficult times,&#8221; Jones said during the EUCOM change of command ceremony in Stuttgart. He reiterated the United States&#8217; commitment to the war on terrorism, saying the war is complex but will be won.

&#8220;I know the men and women who serve in EUCOM are unmatched,&#8221; said Ralston, his voice breaking, as he addressed about 300 EUCOM members and dignitaries gathered in the Patch Fitness Center gym. About a half-dozen U.S. congressmen also attended the 40-minute ceremony.

Also present were assistant secretary of defense Paul Wolfowitz and chairman of the Joint Chiefs of Staff Gen. Richard Myers.

Myers praised Ralston for guiding EUCOM through a dramatic period, which included Operation Enduring Freedom, peacekeeping work in the Balkans and an increased involvement with the Soviet Union.

Jones&#8217; selection as EUCOM commander was heralded as a signal of the change in the U.S. military. During a 10-minute session with reporters after the ceremony, Jones said as a Marine he brings the Corps history of using all elements &#8212; air, land and sea &#8212; in battle.

He noted that Marines can deploy quickly and don&#8217;t stay in-country long.

Jones declined to answer questions about how the NATO coalition will react or if its cohesion will change if the United States attacks Iraq without a coalition of support.

Wolfowitz, however, said there is a growing coalition of partners in the war on terrorism and in support of any military action in Iraq.

He added that there is strong NATO support for getting Saddam Hussein to disarm, but cautioned that it is not a foregone conclusion that the United States will attack Iraq.

EUCOM has more than 100,000 soldiers, airmen, sailors and Marines in the 93 countries that compose its area of responsibility.

Prior to becoming the EUCOM commander, Jones was commandant of the U.S. Marine Corps. He worked in EUCOM in the early 1990s as deputy director of operations and was later chief of staff for Task Force Provide Promise, which ran operations in Bosnia and Herzegovina and Macedonia.

Jones, who grew up in France, graduated from the Georgetown University School of Foreign Service in 1966 and was commissioned a first lieutenant in January 1967, after which he was a platoon and company commander in Vietnam.