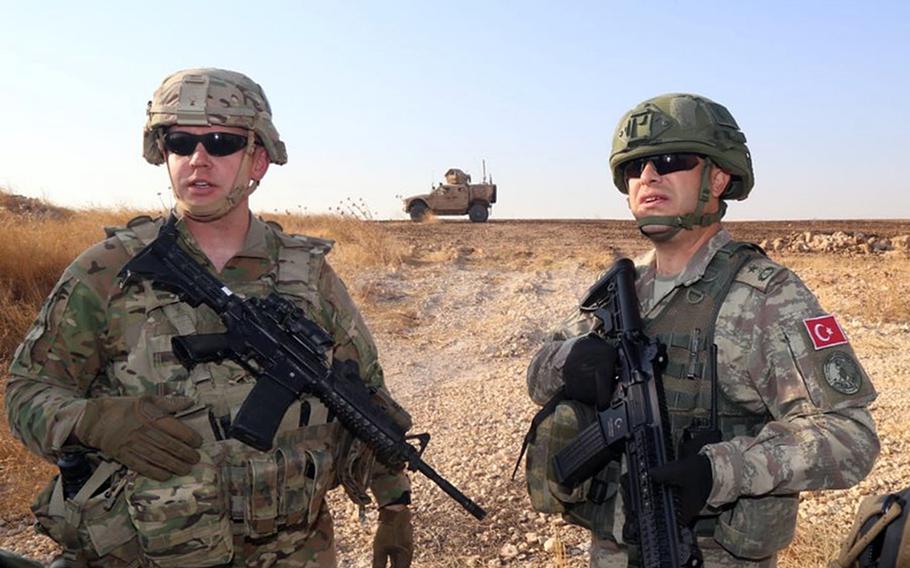 A U.S. servicemember and a Turkish soldier near the Turkish-Syrian border during the third joint ground patrol in Syria Friday, Oct. 4, 2019. (Twitter/U.S. European Command)

A U.S. servicemember and a Turkish soldier near the Turkish-Syrian border during the third joint ground patrol in Syria Friday, Oct. 4, 2019. (Twitter/U.S. European Command) 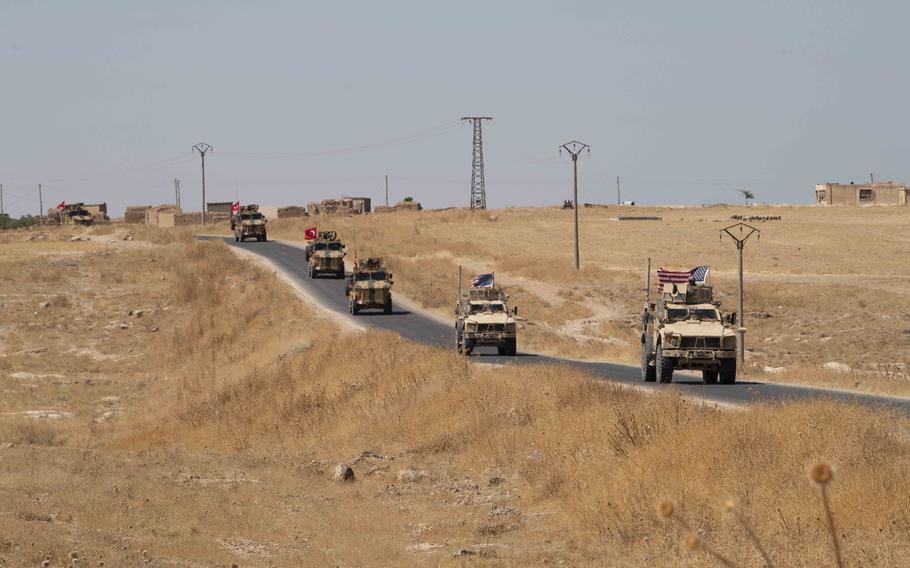 STUTTGART, Germany — The U.S. and Turkey conducted their third joint ground patrol in Syria on Friday even as disagreements between the two NATO allies over how to operate in the area have brought threats from Turkish leaders to launch a unilateral military intervention on its southern border.

The patrol comes three days after Turkish President Recep Tayyip Erdogan lashed out at the U.S. for not doing enough to meet Ankara’s demands for a more expansive safe zone in northern Syria. Erdogan wants the zone along its 300-mile border to extend about 20 miles inside Syria.

Turkey, which aims to settle some 2 million Syrian refugees in the safe zone, had called for an agreement to be reached by the end of September, but Washington and Ankara remain at odds over how deep the zone should reach into Syria.

“We have not achieved any of the results we desired … Turkey cannot lose even a single day on this issue. There is no other choice but to act on our own, east of the Euphrates,” Erdogan said Tuesday at a parliamentary ceremony in Ankara.

The U.S. agreed to the joint patrols in hopes they would reduce tensions with Turkey, a key NATO ally, and protect Kurdish militia fighters.

While the U.S. views Kurdish People’s Protection Units that have operated near Turkey’s border as key to fighting Islamic State militants, Ankara regards the group as a terrorist organization. The buffer area was a way for the U.S. to recognize Turkey’s concerns and attempt to reduce the chances of direct conflict between Kurdish and Turkish forces.

The Syrian government, which is locked in a protracted civil war, has called for both countries to withdraw from inside its borders. Syrian forces have the right to take countermeasures if they refused, the country’s Foreign Minister Walid al-Moualem warned last week at the United Nations in New York.

U.S. and Turkish forces have been working out of a joint operations center in the southern town of Akcakale, where troops plan their patrols and how to maneuver across the border in an area the U.S. describes as a “security mechanism” rather than “safe zone,” as the Turks call it.

The patrols have been “very, very effective,” U.S. European Command’s Gen. Tod Wolters told Pentagon reporters Wednesday. “But we’ve still got a long ways to go. There’s still lots of consultations ongoing and we expect this relationship to continue into the future. And we’ll continue to improve with each and every subsequent patrol.”

The U.S. relationship with Turkey has been increasingly strained, not just over how far the safe zone should project into Syria, but also because of Erdogan’s close ties to Moscow and Turkey’s recent acquisition of Russia’s sophisticated S-400 air defense system. The U.S. responded by kicking Turkey out of its F-35 fighter program and cancelled plans to sell the aircraft to the long-time NATO ally.

“When we as U.S. service members interact, from an exercise standpoint, with our Turkish counterparts, they treat us as brothers at arms,” Wolters said.