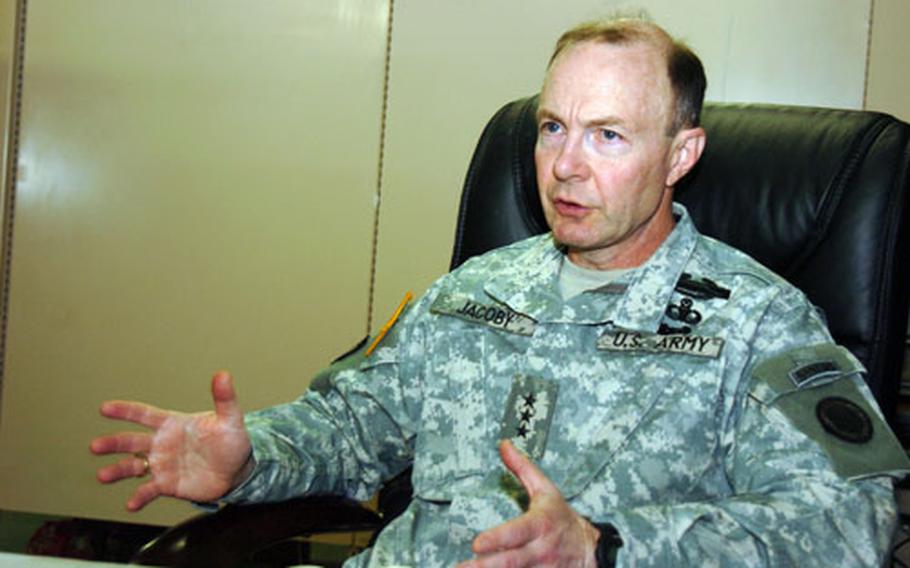 Lt. General Charles H. Jacoby, I Corps commander, talks about the importance of the Yama Sakura exercise on Saturday. Yama Sakura provides a tremendous benefit to both I Corps and the Japan Ground Self-Defense Force&#39;s Northeastern Army, he said. (Photo by Christopher B. Stoltz / S&S)

Lt. General Charles H. Jacoby, I Corps commander, talks about the importance of the Yama Sakura exercise on Saturday. Yama Sakura provides a tremendous benefit to both I Corps and the Japan Ground Self-Defense Force&#39;s Northeastern Army, he said. (Photo by Christopher B. Stoltz / S&S) 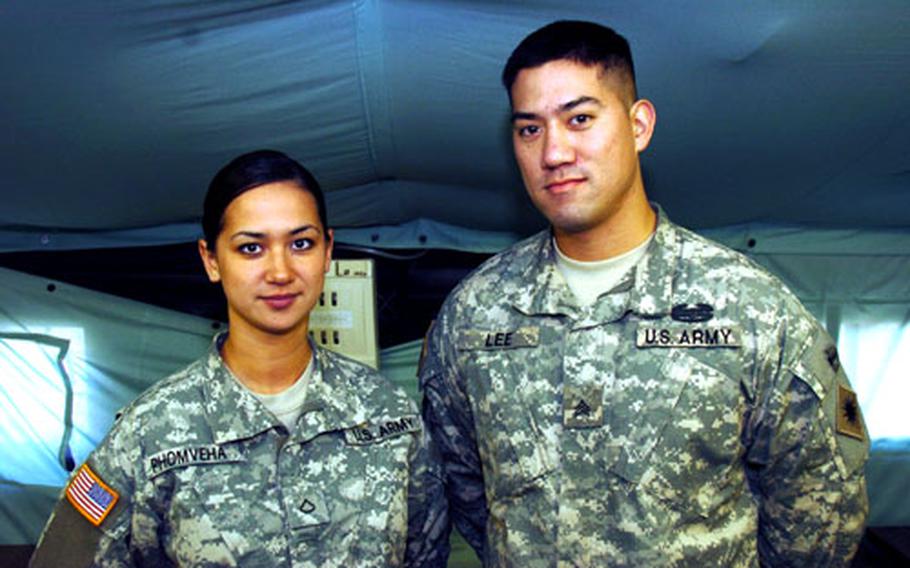 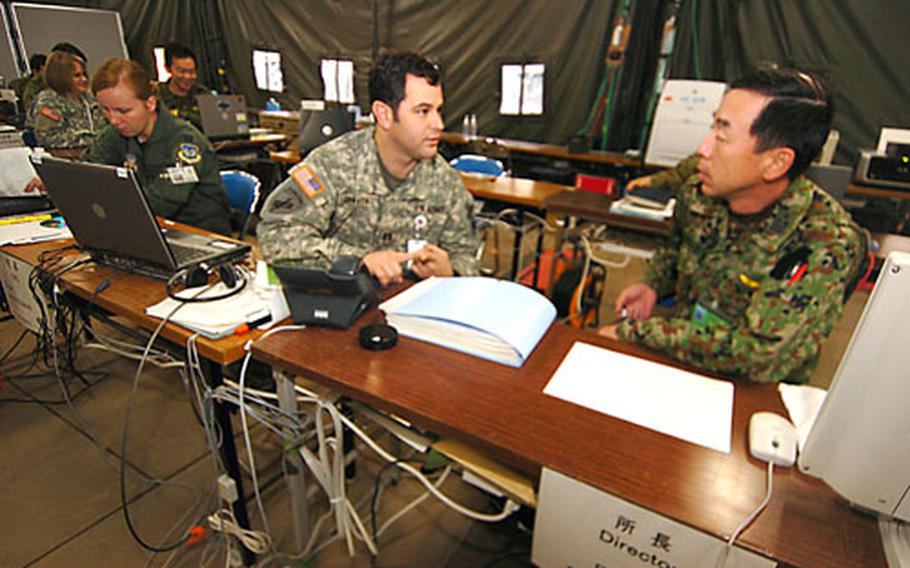 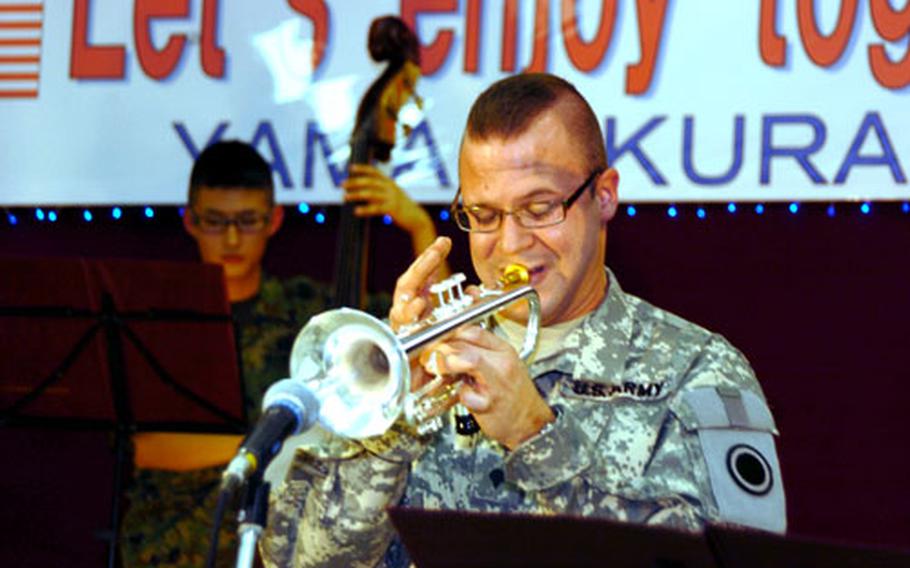 Spc. Mike Nelson, a member of the 56th Army Band out of Ft. Lewis, Wash., plays his trumpet while musicians of the Japanese Ground Self-Defense Force back him up. The musicians helped provide some entertainment during breaks in Yama Sakura. (Photo by Christopher B. Stoltz / S&S) 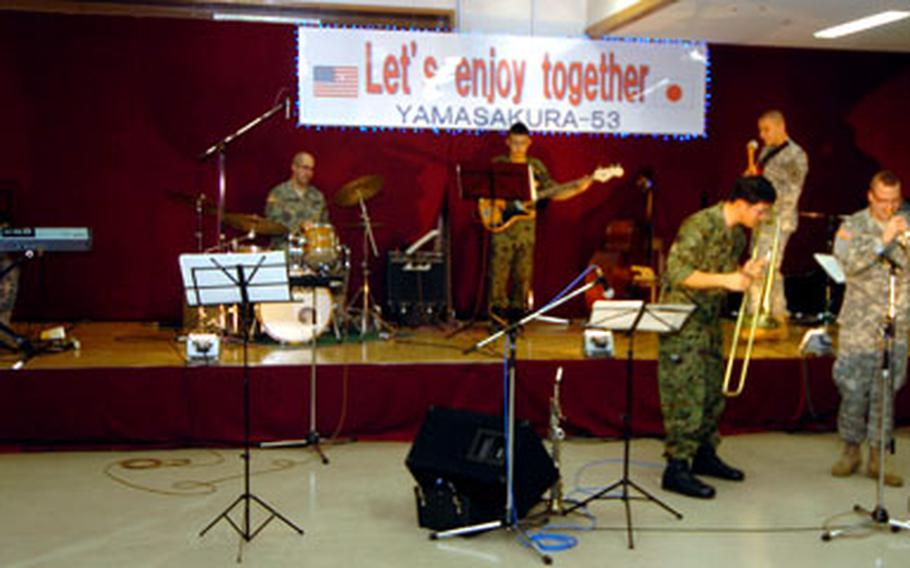 Musicians from the 56th Army Band out of Ft. Lewis, Wash., play with members of the Japanese Ground Self-Defense Force band. (Photo by Christopher B. Stoltz / S&S)

CAMP SENDAI, Japan &#8212; As the tents were torn down and the last soldiers prepared to leave, Yama Sakura, a bilateral training exercise between the U.S. Army and the Japan Ground Self-Defense Force, came to a close on Sunday.

Roughly 3,500 Japanese and 2,000 U.S. servicemembers took part in the command-level exercise, which used computer simulations to pit the U.S. Army&#8217;s I Corps and the JGSDF&#8217;s Northeastern Army against an invading enemy force. It was the 25th year that the exercise has taken place and is among the military&#8217;s largest bilateral events.

Training as a corpsIn years past, the primary focus of Yama Sakura had been improving the working relationship between the U.S. and Japanese militaries. Recently, as U.S. Army corps-level headquarters are routinely being deployed, the exercise has transformed into a more strenuous training event.

Yama Sakura provides a tremendous benefit to both I Corps and the Northeastern Army, said Lt. Gen Charles H. Jacoby Jr., the I Corps commanding general.

&#8220;All battlefield functions are being tested,&#8221; he said, adding that because the exercise is a warfighting event, there is additional rigor due to the intensity and quality of the simulation.

I Corps and the regional armies of Japan traditionally have worked well together, said Col. Al Neyland, the I Corps Forward and U.S. Army Japan G3.

&#8220;The Japanese army is very professional,&#8221; he said. &#8220;One of their biggest strengths is to be able to analyze a situation in painful detail to provide the commander with the best course of action.&#8221;

This year, it was nothing but music as he and his fellow musicians performed for military and civilian audiences on Camp Sendai and in the nearby community.

Even though there was a language barrier, Sgt. Michael Johnson, a pianist and guitarist, said music is a universal language.

One of the fewThe Army and JGSDF were not the only servicemembers who participated in Yama Sakura. A handful of airmen, sailors and Marines also took part.

&#8220;Working with the Army is very, very, very different,&#8221; said Cpl. Joshua Johns, a Marine assigned to the Headquarters Battalion of the 3rd Marine Division at Camp Courtney, Okinawa.

Johns, who handled personnel reports for the exercise, said he was glad to be able to represent the Marines at Yama Sakura and to have the chance to interact with the Japanese troops.

Marines sometimes get a bad reputation in Japan, he said, but working with the Japanese gave the troops a chance to strengthen their bonds.

However, Johns did say there was one downside to the event.

Army, National Guard soldiers get a look at life in Japan

CAMP SENDAI, Japan &#8212; While much of the focus of this year&#8217;s Yama Sakura exercise revolved around I Corps and the Japanese Northeastern Army, members of the Army National Guard and Army Reserve also participated in the exercise.

Leaving their homes and civilian lives behind, soldiers from California, Colorado and Puerto Rico came to Japan to support the exercise.

Pfc. Sandy Phomveha, a command and control personal computer operator from the 40th Infantry Division, said it was her first overseas trip.

&#8220;I was asked if I was interested in coming to Japan for the exercise,&#8221; said Phomveha, who in civilian life works in drug law enforcement in Albuquerque, N.M.

In the National Guard for only 18 months, she said the exercise gave her the chance to learn more about her job and what she would do during a combat operation. It was the first time she used the C2PC system, a computer program to track troop movements and other data on a tactical map display.

Sgt. Kurtis Lee, an intelligence analyst from Chino Hills, Calif., and also with the 40th Infantry Division, said deployment to Japan was not just a good training experience but also a chance to learn more about another culture.

Lee said he was able to visit a Japanese castle, a museum, a shopping mall and the picturesque Matsushima Bay during a day off from the exercise.