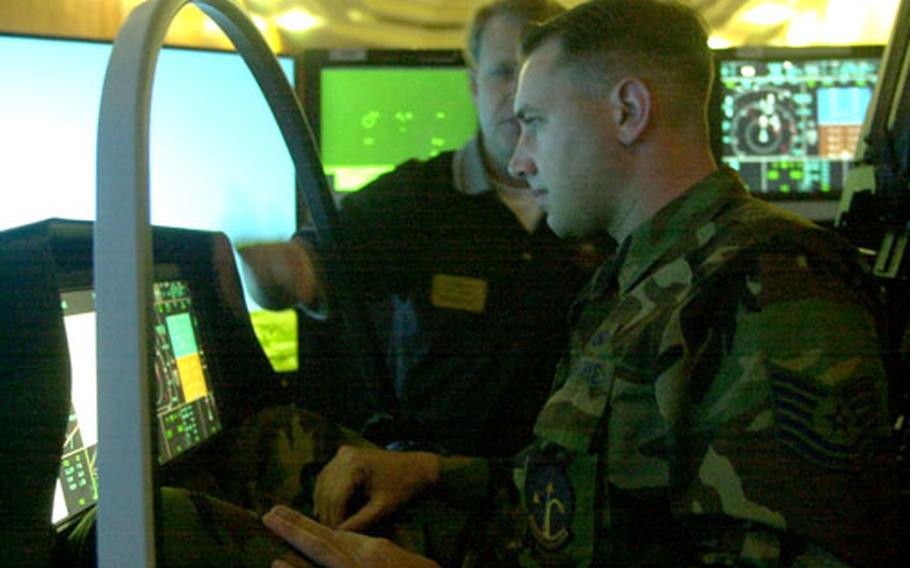 SPANGDAHLEM AIR BASE, Germany &#8212; It will be more than six years until the military has its first operational squadron of F-35 Joint Strike Fighters.

But Trey Evans, 14, got to fly the supersonic and stealthy jet last week and raved about it.

He flew a computer simulator, of course. Plane builder Lockheed Martin brought its traveling F-35 cockpit sim to Spangdahlem and Ramstein Air Base to show off the future fighter. A team from Lockheed Martin, based in Texas, is touring Europe, bringing the cockpit to U.S. and European bases.

About 500 people at Ramstein and Spangdahlem got a test run. Anyone could try the sim, from pilots to spouses, and most left impressed.

First Lt. Rob Hansel, an F-16 pilot with the Spangdahlem-based 22nd Fighter Squadron, said the plane is much more advanced and offers a tremendous amount of information to help pilots get a good picture of the situation around them.

All of the jets will be packed with the latest and greatest avionics and the type of technology that seems straight out of a Hollywood movie.

Rob Bennett, a Navy Reserve pilot who works as an engineer for Lockheed Martin, said the first thing aviators notice is how &#8220;clean&#8221; the cockpit is. It is nearly free of the scores of buttons, blinking lights and switches that are common in today&#8217;s fighters.

Almost everything has been condensed and is presented on flat-panel touch screen at the front of the cockpit. It works much like any desktop computer. If a pilot wants to check the radar, he or she can touch the radar tab on the screen. If he or she would like a real-time video picture of the target, he or she just presses the correct tab.

Another feature allows the pilot to point to a location on the screen and the computer will automatically take over and fly to that spot.

The system also can be figured to work with voice commands, but designers found that pilots preferred the touch screen.

An in-helmet display system will offer pilots much of their navigating and targeting information right in front of their face. So, wherever they look, they&#8217;ll get the image.

In addition, cameras are strategically placed around the plane to give operators views from angles they&#8217;ve never seen before. The video means pilots can &#8220;see through&#8221; the plane and get a clear picture of the runway below. For example, a pilot taking off or landing vertically will be able to see the runway markings directly below the belly of the plane as he or she ascends or descends.

The cockpit simulator on tour is the same one used by engineers to develop the fighter.

Billy Diehl, a retired Air Force colonel who now works for Lockheed Martin, said the company took the simulator on the road to show people the plane is on its way to joining the military&#8217;s fighter jet inventory.

Services will each get own versions of F-35s

Three variants of the F-35 Joint Strike Fighter are under development and the first test flight is scheduled for next summer.

The Air Force, Navy and Marine Corps plan to buy nearly 2,000 of the planes. In addition, eight allied countries also are participating in the plane&#8217;s development and plan to fly them.

The three types are nearly identical and share many of the same parts, which designers say will make the jet more economical. Billy Diehl, a retired Air Force colonel who now works for Lockheed Martin, said the plane would cost between $45 and $60 million each.