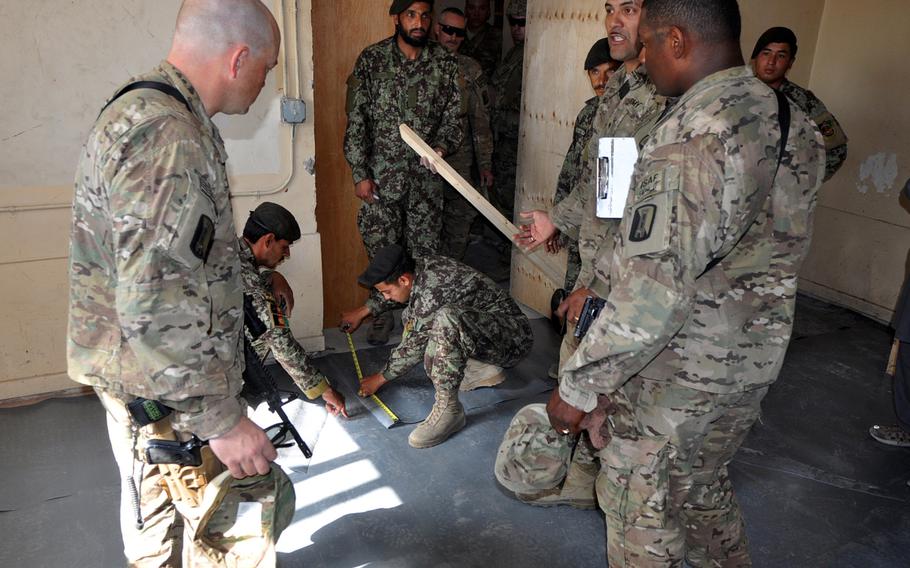 Members of the 859th Engineer Company (Vertical) watch as Afghan National Army soldiers install flooring as part of the final stages of a joint construction project at the ANA's 4th Brigade headquarters near Jalalabad, Afghanistan. (Josh Smith/Stars and Stripes)

Members of the 859th Engineer Company (Vertical) watch as Afghan National Army soldiers install flooring as part of the final stages of a joint construction project at the ANA's 4th Brigade headquarters near Jalalabad, Afghanistan. (Josh Smith/Stars and Stripes) 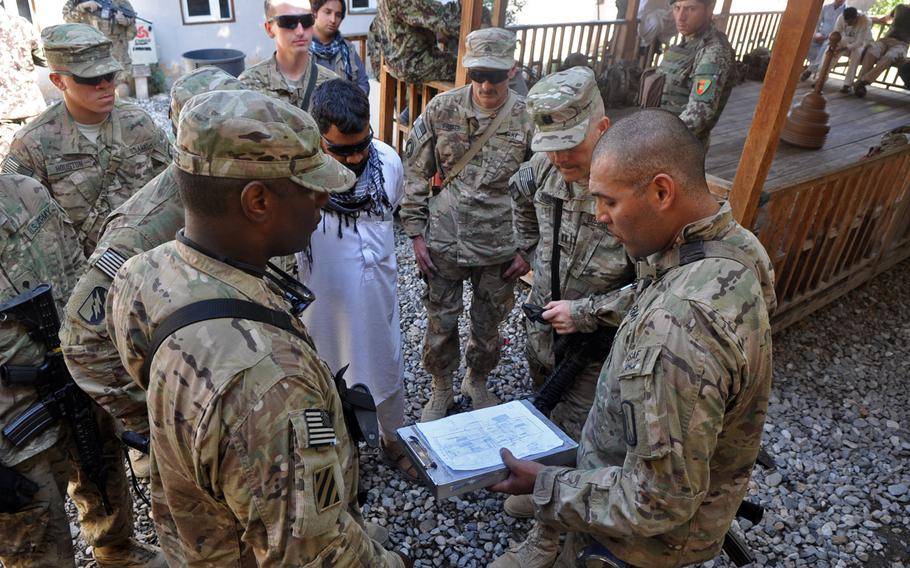 Spc. Marcos Lopez, front right, explains renovation plans to fellow members of the 859th Engineer Company (Vertical) at former Forward Operating Base Hughie. The base was turned over to the Afghan National Army in 2012 and American engineers returned to help train Afghan soldiers to renovate and better maintain the buildings. (Josh Smith/Stars and Stripes) 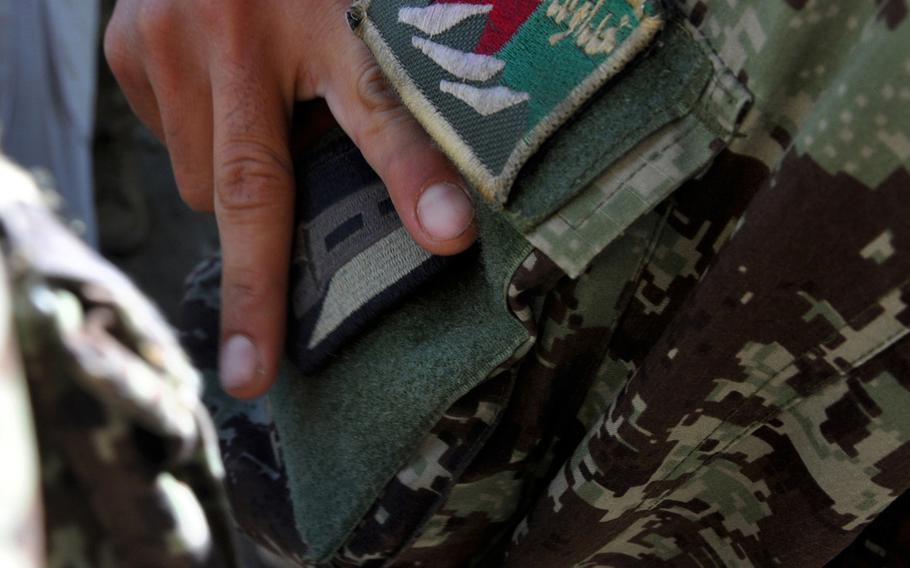 FORWARD OPERATING BASE FINLEY SHIELDS, Afghanistan — As international troops pack up across Afghanistan, the question of how facilities they leave behind should be used is often a source of friction between local officials and departing troops.

In the border province of Nangarhar, American advisers are hoping joint construction projects with Afghan troops will help ease some frustrations while leaving more usable facilities.

Many Afghans complain they lack resources to maintain base facilities for their intended use, while many U.S. soldiers express frustration at what they see as a lack of appreciation and care for facilities and resources they invested time and resources to set up. It’s unlikely that the Afghans will be getting more resources, but coalition troops hope that more training can inspire Afghan forces to do more with what they do have.

At the headquarters of the Afghan National Army’s 4th Brigade, 201st Corps near Jalalabad, American security advisers recently completed a project to provide a functional operations center at what was former Forward Operating Base Hughie, which housed American forces until July 2012 when it was turned over to the ANA.

Projects like the one at former FOB Hughie are aimed at empowering the Afghan soldiers to maintain buildings long after international forces have departed, advisers say.

“They have the capability and the tools, but whether they use them is up to them,” said Capt. Jed Fisher, a member of the Security Forces Assistance Team that advises the Afghan brigade’s staff.

U.S. soldiers say they were shocked at how quickly the FOB’s facilities seemed to fall into disrepair. A large room that had been used by the Americans as a gym was turned into makeshift working and sleeping quarters by the Afghans.

Afghan leaders and their international advisers recognized that the space needed to be turned into a more functional central operations center for the brigade, which handles security for all of Nangarhar province.

American soldiers in the 859th Engineer Company (Vertical) were brought in to work with Afghan soldiers to renovate the building, erecting new walls and redoing electrical systems, among other work.

But American bases in Afghanistan often feature their own ad hoc construction and the electrical systems proved especially challenging after years of makeshift wiring.

“There were many layers of improvisation. It was a zoo,” Fisher said. He said the joint project was deliberately left unfinished so Afghan soldiers could put in the final touches, though the work of the Afghans and Americans didn’t always match.

On one wall, for example, metal conduit protected wiring that entered one side of a light fixture where the combined team of engineers had worked to keep international standards. On the other side of the light ran an exposed wire where Afghan troops had finished the job.

Afghan National Army Sgt. Sarar Wali helped oversee the construction and said he was pleased with the training. He insisted that he and his soldiers are ready and willing to maintain their facilities. “Based on the project, we will be able to do much more here,” he said.

“Unlike infantry or heavy bombers who can only destroy, we build things,” 859th company commander Capt. John Anderson said. “These kinds of projects are key to building lasting relationships.”