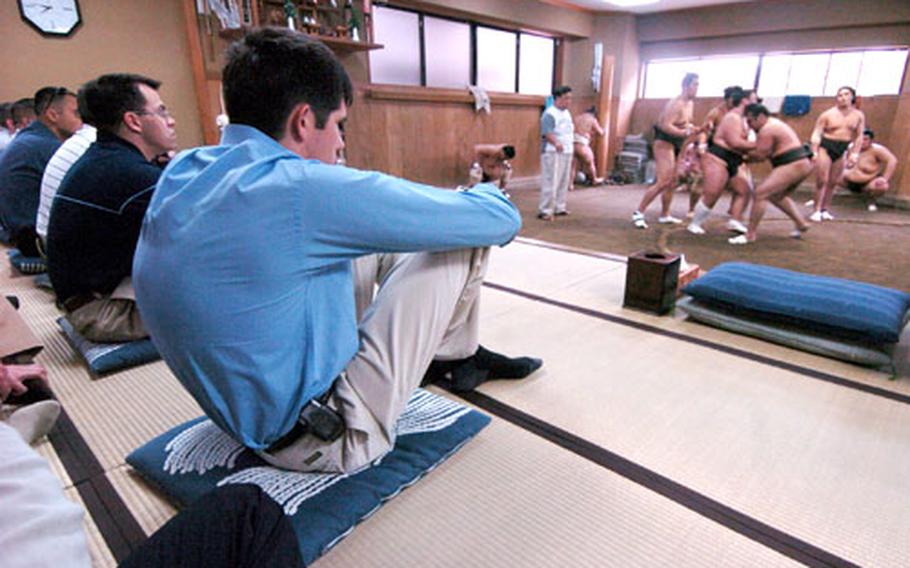 U.S. and Japanese military members watch a sumo wrestling practice Tuesday in Tokyo. The servicemembers were brought together as part of the U.S.-Japan Joint Program, a nonprofit organization’s effort to spark friendships and introduce Japanese culture to U.S. troops. (Christopher B. Stoltz / S&S)

TOKYO &#8212; They visited a sumo stable, meditated at a temple and discussed defense issues with high-ranking U.S. and Japanese officials.

And along the way, 10 U.S. junior officers began forging friendships with their counterparts in Japan&#8217;s Self-Defense Forces.

Servicemembers from the Army, Navy, Air Force, Marine Corps and Coast Guard from U.S. bases in mainland Japan are in Tokyo this week as part of the U.S.-Japan Joint Program. Organized by a Japanese nonprofit organization to introduce Japanese culture to U.S. troops, the program also has an even more important goal, said Reiko Tamura, the program organizer.

&#8220;We hope it will lead them to become lifelong friends&#8221; with the Japanese troops, especially as both forces are emphasizing developing closer ties with one another, she said.

The initiative, formally known as the Welcome Marine Program, was altered this year to team the servicemembers with members of JSDF and the defense ministry for the first time.

Although many participants had worked with their counterparts before, both American and Japanese participants made fresh discoveries.

&#8220;I realized we have things in common. We were laughing at the same things and the jokes were the same,&#8221; said Army Capt. Hardy Johnson from Camp Zama.

And amid all the bonding, there was learning.