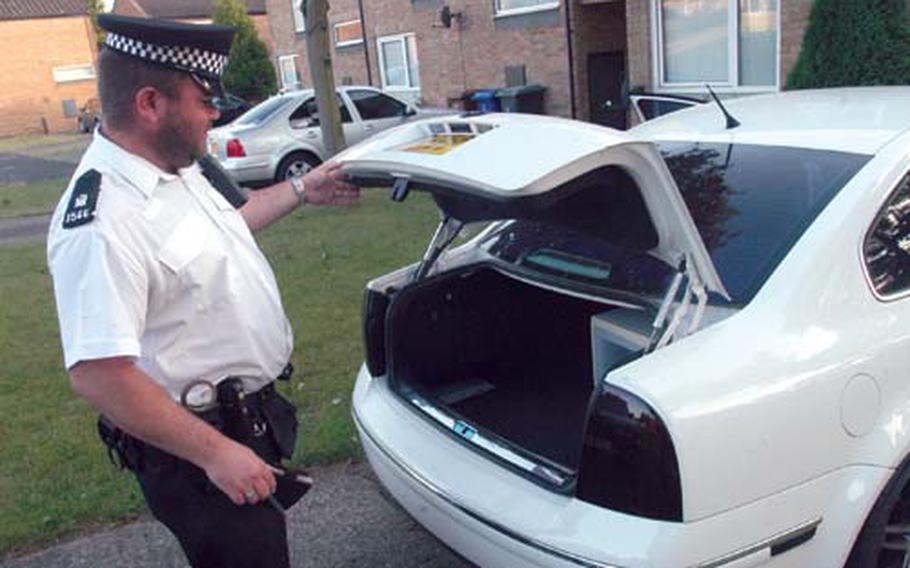 LAKENHEATH - An airman&#8217;s silver Chevrolet Tahoe sat unlocked in a driveway, but a quick look inside revealed nothing worth stealing.

A few feet away, the unlocked house was a different story. Inside, the keys to the truck and perhaps $16,000 of electronic equipment were easy pickings.

Luckily, a thief didn&#8217;t hit this jackpot. A British constable with the Lakenheath Safer Neighbourhood Team made the find as part of the team&#8217;s unique approach to preventing theft in off-base neighborhoods dominated by U.S. airmen.

"Everything would have been gone in a few seconds," said Constable Jono Waller, who entered the vehicle and home as a 48th Security Forces Squadron airman recorded the owner&#8217;s security violations.

Joint "hot spot" patrols allow Waller&#8217;s team and members of the 48th and 100th Security Forces squadrons, plus a few volunteer airmen, to comb neighborhoods like thieves so they can warn residents to lock up belongings.

On June 30, they spread out over Lakenheath&#8217;s Lords Walk neighborhood, which became off-base property after the new RAF Lakenheath gate opened last month.

"Now it&#8217;s open and [thieves] are getting a little curious, unfortunately," said Waller, adding a few thefts have recently been reported in the area.

His three-man team and security forces began the joint patrols in its sector last summer following a surge in thefts from airmen&#8217;s vehicles. This summer, the team has recruited more security forces and other airmen to help out.

Waller claims the patrols have decreased crime in the local area.

Beck Row has seen a slight increase in airmen victims, to seven out of nine thefts from vehicles reported this year, from five out of nine incidents in the same period last year.

Further patrols in both towns until October aim to cut these numbers. But the police can only do so much; it mainly relies on vehicle owners, they say.

"The common theme is that these vehicles are being left [unsecured] with items on show," said Police Community Support Officer Jason Thomas, one of the team members.

Thieves have been known to pinch satellite navigation systems, military uniforms and paperwork as well as identification cards, among other items, he added.

While patrolling Lords Walk, police checked 78 vehicles and found that 18 were unlocked. Police then knocked on the owners&#8217; doors and warned them to lock the vehicles&#8217; doors and leave valuables out of sight.

"We can&#8217;t really punish them for leaving their car unsecured," said Airman 1st Class Kenneth Hackney, a 48th member. "We can only advise them on safety precautions for future reference."

Master Sgt. Dave Scieszka, of the 48th Communications Squadron, volunteered for the Lords Walk patrol, where he and his family reside. He hopes his neighbors will also step up to protect valuables and families from lurking criminals.

Anyone who wants to keep tabs on crime in the local area can register online with Suffolk&#8217;s Neighbourhood Watch program. Once registered, residents receive via e-mail the latest newsletters on crime in their areas.

Here are some tips on vehicle security:

&#8226; Remove military gear and equipment from your vehicle.

&#8226; Do not leave valuables in plain view. If you have a removable stereo faceplate, remove it and hide it. Also, remove satellite navigation devices and holders from vehicles.

&#8226; Park in open, well-lit and populated areas near your destination. Avoid parking near trucks, trash bins and other objects that can obstruct visibility and provide hiding places.

&#8226; Turn off your engine, roll up all windows, lock all doors and take your keys with you when making even a quick stop at a store, gas station or your driveway.