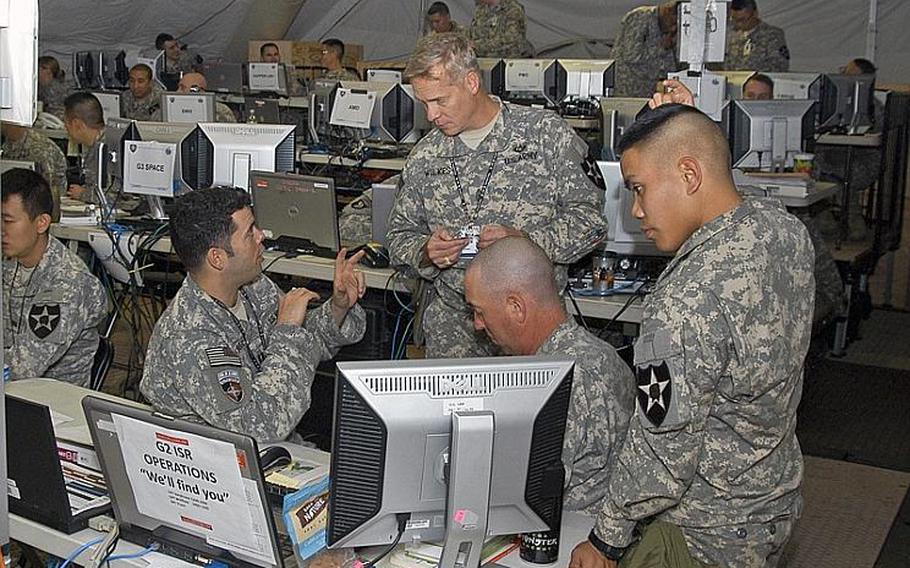 Buy Photo
U.S. Soldiers confer in November 2011 in one of the operations centers utilized during Warpath III - an exercise during which about 1,000 American and South Korean soldiers practiced how they would respond to a chemical or biological attack by North Korea. (Jon Rabiroff/Stars and Stripes)

CAMP RED CLOUD, South Korea - About 6,000 U.S. and South Korean soldiers are starting a week of practice for a potential conflict with North Korea, an annual exercise that officials say takes on added significance with the American military's renewed focus on the Pacific.

The 2nd Infantry Division, in a statement, stressed that the Warpath III exercise starting Saturday "is defensive in nature (and) not connected to any real world events."

Nevertheless, 2ID spokesman Lt. Col. Joe Scrocca said, "With [the Department of Defense's] rebalance to the Pacific, the readiness of our forces on the Korean peninsula is paramount.

"There is no other place on the globe where the potential for large-scale, full-spectrum conflict exists on a daily basis, like it does on the Korean peninsula," he said.

The specific aim this year is to train and test the 1st Armored Brigade Combat Team. Also participating are a number of U.S.-based units, including chemical specialists from Fort Lewis, Wash., and Fort Hood, Texas, and the 14th Psychological Operations Battalion from California, along with elements of the South Korea Army's Sixth, Seventh and Capital Corps.

"The combined nature of this exercise highlights interoperability requirements of conducting unified land operations with our (South Korean) partners from the platoon to the combined-division level," Scrocca said.

Last year's exercise focused on how the U.S. and South Korean militaries would react in the event of a North Korean chemical or biological attack. 2ID commander Maj. Gen. Edward C. Cardon said at the time: "I'm in the security business, where you constantly get surprised. So the best thing you can do is be ready."