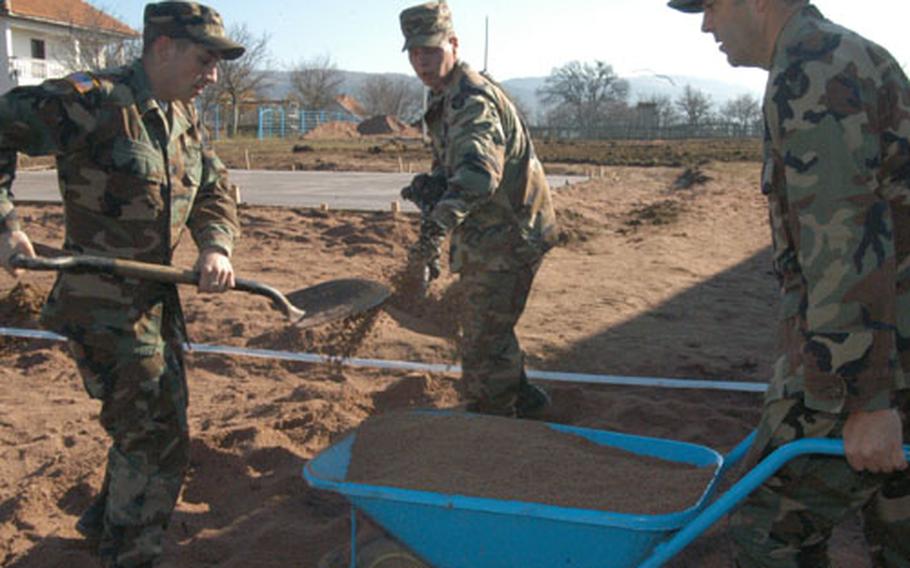 Cpl. Mike Fitzgerald of the 86th Medical Company, Air Ambulance, and Sgt. Raymond Hagen of the 682nd Engineer Battalion shovel sand into wheelbarrow held by Capt. Mike Wiedrich, of Headquarters and Headquarters Company, 34th Infantry Division. The sand was used to even out the volleyball court American and Turkish troops were building for Budozelje villagers. (Ivana Avramovic / S&S)

Cpl. Mike Fitzgerald of the 86th Medical Company, Air Ambulance, and Sgt. Raymond Hagen of the 682nd Engineer Battalion shovel sand into wheelbarrow held by Capt. Mike Wiedrich, of Headquarters and Headquarters Company, 34th Infantry Division. The sand was used to even out the volleyball court American and Turkish troops were building for Budozelje villagers. (Ivana Avramovic / S&S) 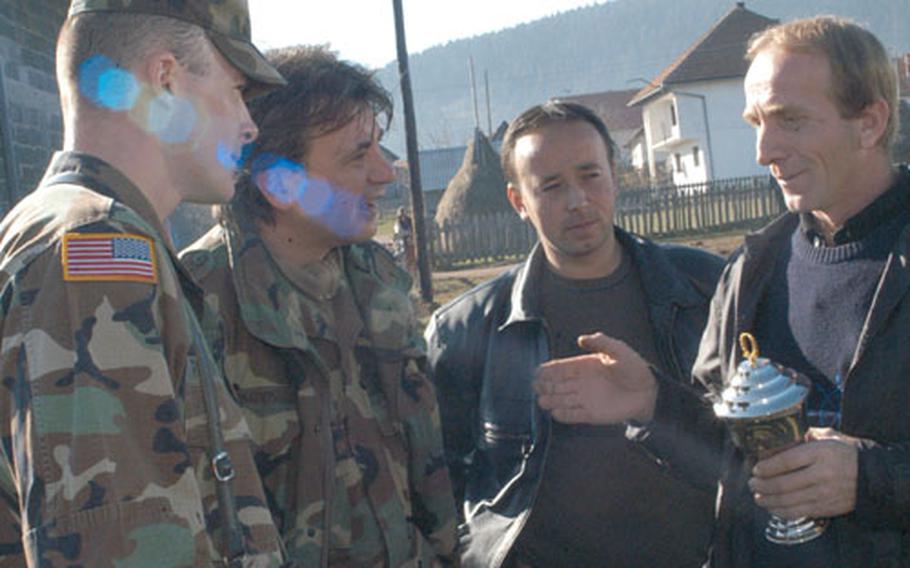 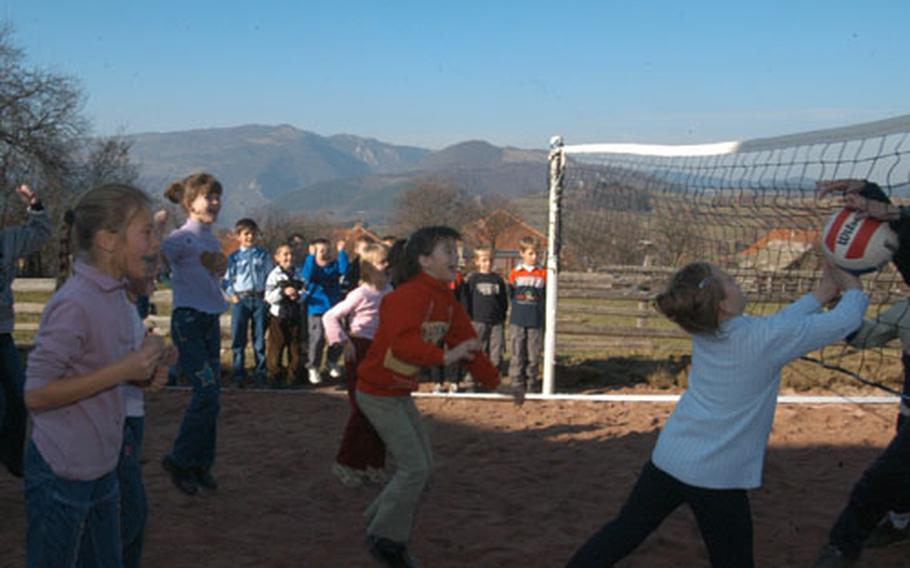 Children of Budozelje enjoy their new volleyball court. The construction material for the playground built by American and Turkish soldiers was paid for by the Organization for Security and Cooperation in Europe. (Ivana Avramovic / S&S)

BUDOZELJE, Bosnia and Herzegovina &#8212; Peacekeepers do not often get trophies for their work, but they got one for building a playground at the remote village of Budozelje.

U.S. and Turkish soldiers and the Organization for Security and Cooperation in Europe joined together to construct areas for playing basketball, volleyball and soccer at this hilltop village, some four hours southwest from Eagle Base.

For years the village&#8217;s 1,000 residents, about 120 of them children, had wanted a place were the youngsters could play the games popular all over the world.

They got their chance three years ago when the OSCE asked the villagers to participate in mock elections and offered to fulfill that wish in return.

But the project slipped through the cracks, and it took years, villagers&#8217; persistence and a joint effort by Stabilization Force troops and OSCE officials to make the playground a reality.

OSCE paid about $1,800 for sand and concrete and SFOR supplied the equipment and labor.

&#8220;These guys here are not normally engineers,&#8221; Capt. Scott Rohweder, of Headquarters and Headquarters Company, 687th Engineer Battalion, said of his National guardsmen. But they do know about working on civilian projects, and were glad to have the chance to do so in Bosnia.

Soldiers used shovels, wheelbarrows and hands to distribute sand evenly across the volleyball court. They enclosed the court with mounds of dirt and grass, and put up the volleyball net.

Meanwhile, a soldier in a front-end loader drove back and forth flattening the soccer field.

During the several days this month that soldiers spent at the village working on the playground, the residents showed their hospitality and gratitude by offering the soldiers Bosnian coffee.

And they did not shy away from rolling up their sleeves and pitching in. About 100 gathered and did much of the work on the day when the trucks came to pour concrete for the basketball court.

When the work was all done, the villagers said thank you with a little ceremony.

&#8220;After all this time American military and Turkish soldiers have turned out the real winners,&#8221; said Miralem Dzido, the community leader, as he presented the soldiers an old trophy from the Budozelje school.

With a first- to-fourth-grade school at the village and no good place for children to bounce basketballs, the motivation of the villagers was obvious.

&#8220;It&#8217;s embarrassing for our children to get acquainted with basketball for the first time when they&#8217;re 13, or 14,&#8221; Dzido said, explaining that students often were not introduced to the game until the left their village to go to a school for higher grades at a town down the mountain.

When the troops finally finished the volleyball court, the students put on a small performance of skits, recitals, singing and thank-you drawings on the blackboard for the soldiers.

Then they ran outside to test the new court.

&#8220;This is a very good chance to work together and put together a project that benefits the children,&#8221; said Capt. Mike Reineke of 34th Infantry Division, who coordinated the project between the Turkish and U.S. military, and OSCE.