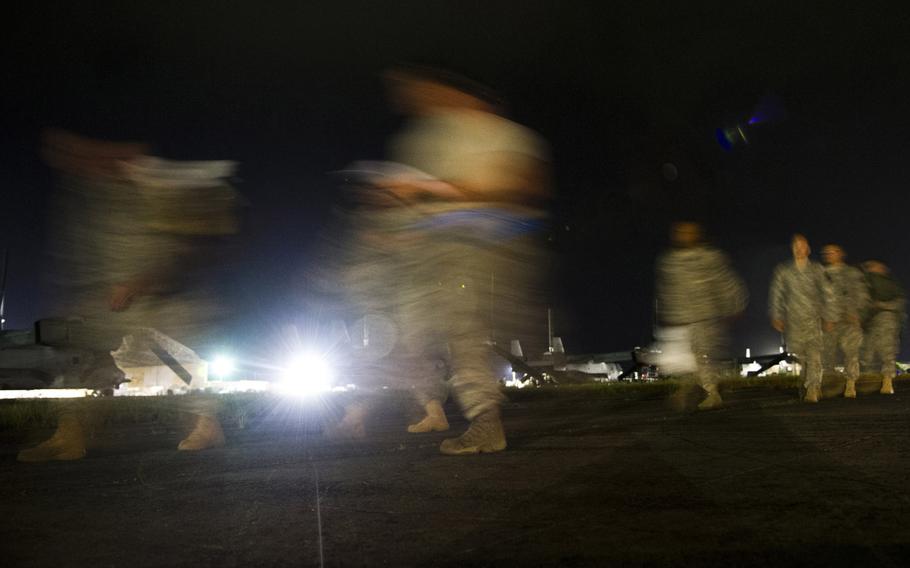 U.S. Army Soldiers of the 101st Airborne Division walk to the passenger terminal as they arrive during Operation United Assistance to help contain the Ebola virus outbreak in Liberia on Oct. 22, 2014. (Gustavo Gonzalez/U.S. Air Force)

WASHINGTON — The military’s top brass has recommended that all American troops returning from the mission to combat Ebola in West Africa be quarantined, the Pentagon announced Tuesday.

Pentagon press secretary Rear Adm. John Kirby told reporters that Secretary of Defense Chuck Hagel “shares the concerns by the chiefs about the safety and well-being not only of our troops but also of their families,” but has not yet made a decision about whether to approve the recommendation from the Joint Chiefs.

Hagel received the chiefs’ recommendation on Tuesday, shortly after Army leadership decided to isolate Maj. Gen. Darryl Williams and 10 other soldiers for three weeks to ensure they are not infected after spending time in Liberia, where they were participating in Operation United Assistance.

They and other soldiers arriving in Vicenza, Italy, will be allowed no physical contact with family members but will have access to telephones and the Internet, Army spokeswoman Lt. Col. Alayne Conway said.

Officials say the returning troops will work while in isolation, and they’ll have access to a gym and entertainment facilities during off hours. Meals prepared on base will be delivered to the holding site, and troops will undergo twice daily health checks to monitor for signs of Ebola infection.

Hagel supports the Army’s decision to isolate Williams and the soldiers who were traveling with him, Kirby said, but might limit the practice going forward.

“This was the first group of U.S. military personnel that have come back from Liberia … The secretary understands that Army leadership, supported by the recommendations of the Joint Staff, wanted to take a very conservative approach, particularly for this first group … He understands that and didn’t feel it was necessary to step in the way of it. But broadening it to the entire force and making a department-wide policy decision is something that he wants to take very seriously,” Kirby said.

“The secretary reserves the right to make this kind of a decision … for the entire Defense Department, for all our troops,” Kirby told reporters.

The Joint Chiefs’ recommendation is out of sync with the Centers for Disease Control and Prevention, which on Monday issued new guidelines calling only for voluntary, home quarantine for people returning from West Africa who are at the highest risk of contracting Ebola.

Kirby was asked why military leaders want to impose more stringent guidelines, despite the fact that U.S. troops have not been in direct contact with Ebola patients.

“The Joint Chiefs get paid to look after their troops and their families. That’s their job, and the recommendation was in that vein and in that light. It wasn’t meant to drive any other public discussion or debate. It wasn’t meant to challenge the opinions or other protocols of other agencies inside or outside government,” he said.

Kirby wouldn’t disclose what specifics arguments for the force-wide quarantine were made by the Pentagon brass, but would only say “they made plain their concerns.”

On Tuesday, President Barack Obama was asked to comment about the different protocols in place for civilian versus military personnel returning from West Africa.

“The military is in a different situation obviously, because … they are not there voluntarily … They are already — by definition if they’re in the military — under more circumscribed conditions,” he told reporters.

A researcher who works with the Ebola virus, David Sanders, an associate professor of biology at Purdue University, said that in the civilian world at least, placing people in quarantine who aren’t exhibiting symptoms makes little sense from a scientific or public policy standpoint.

“The idea of quarantining people who are not sick — that’s a terrible way of going about things,” he said. “It’s like imprisoning people because you think they may commit a crime.”

The details about how a force-wide isolation protocol would be implemented have yet to be worked out, according to Kirby.

“I think there’s still some spade work that needs to be done … and we’re just not at that stage right now,” he said.

Kirby said there is no specific time line for Hagel to make a decision, but he expects it to happen “very soon.”