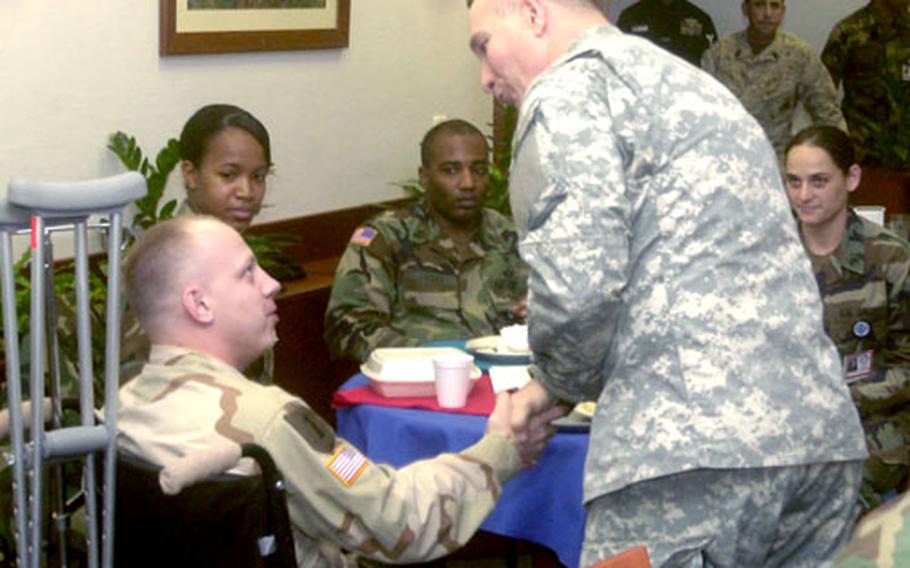 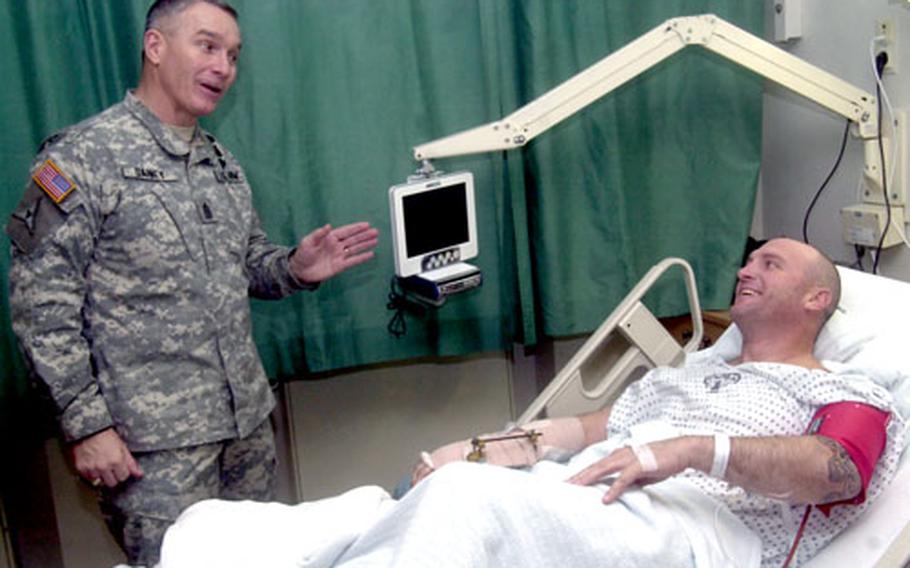 Gainey had the soldiers, sailors, Marines and airmen promise that they would not sell their coins online or at pawnshops.

The informal oath raised a few chuckles out of the servicemembers and was one of many times Gainey had the troops laughing.

Such is an example of the down-to-earth Gainey, the first senior enlisted adviser to the chairman of the Joint Chiefs of Staff. Gainey visited troops Wednesday at the medical center and Ramstein Air Base during a series of trips to various joint commands worldwide. Gainey&#8217;s newly created position was established to advise the chairman on matters of professional development of enlisted personnel for a joint environment, according to his biography.

Gainey went on to tell the troops at Landstuhl that the coins were &#8220;on loan&#8221; from him as long as they were being their best and maintaining their self-pride.

Pride is an important attribute for Gainey. His personal motto of &#8220;Pride is contagious&#8221; is printed on his coins. He proudly talks about his South Carolina roots, and he maintains that his proudest rank was private first class.

While having achieved his senior position, Gainey said he has not forgotten who he is. He told the troops at Landstuhl not to forget who they are, no matter how high they rise in the ranks.

His personality, humor and candor endeared him to troops in attendance at the large lunch gathering.

&#8220;He talks to the soldiers kind of like on a one-on-one basis even though it&#8217;s an open area out here,&#8221; said Army Spc. Christopher Towns, who was seated in a wheelchair due to a right-leg injury that occurred in Iraq.

Following the lunch, Gainey made bedside visits to wounded troops in the hospital&#8217;s intensive care unit and regular wards. Gainey told the wounded that he&#8217;s proud to be on their team and he&#8217;s sorry they were injured.

As a former Army scout, Gainey met another scout Wednesday when talking to Army Sgt. Joseph Brown. Brown&#8217;s right arm was wounded recently during a mortar attack in Baghdad. In addition to giving Brown a command coin, Gainey also handed Brown his personal card and told him to e-mail a note during his recovery. Brown plans on doing that.