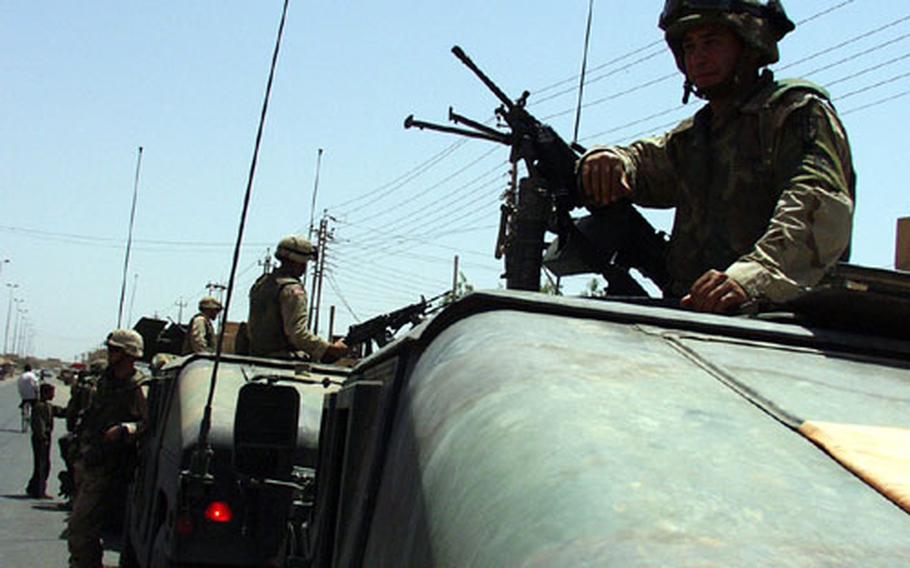 Pfc. Joseph Lisciandri and other military police wait for Iraqi police to join their patrol through Baghdad. (Marni McEntee / S&S)

Pfc. Joseph Lisciandri and other military police wait for Iraqi police to join their patrol through Baghdad. (Marni McEntee / S&S) 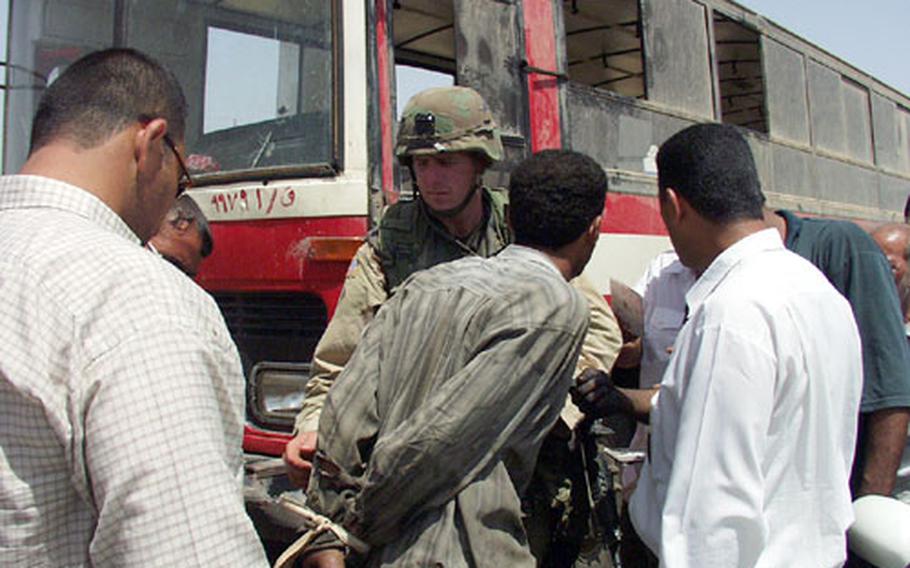 BAGHDAD, Iraq &#8212; The shift started a little rough for members of the 615th Military Police Company, who were set to join newly hired Iraqi policemen for a patrol.

As four of the 615th&#8217;s Humvees rolled up to a southwest Baghdad police station to swap duties with the morning MP shift, two dozen local police were gathered on the sidewalk, heatedly discussing who needed to be paid and who was going on patrol.

An hour later, salaries agreed upon, three newly minted Iraqi policemen were in a sedan sandwiched between the American Humvees and were on the road.

With the joint patrol program only in its first week, a few &#8220;organizational difficulties&#8221; were to be expected, said 1st Lt. Joshua Campbell, whose company, part of the Mannheim-based 18th MP Brigade, draws soldiers from Vilseck, Grafenw&#246;hr and Hohenfels, Germany.

Before the war, roughly 20,000 Iraqi police patrolled the capital &#8212; a feared force that often maintained order with brutal tactics.

In the Heidelberg, Germany-based V Corps zone, which includes Baghdad and areas north and east of the capital, more than 7,000 Iraqi police have reported for work, an Army news release said last week. But only about 400 of them have actually hit the streets, according to a 3rd Infantry Division briefing last week to V Corps Commander Lt. Gen. William S. Wallace.

The joint patrols are a very visible effort to give Baghdad back to Iraqis, but there is no doubt that U.S. troops remain the backbone of security in the city. With few weapons, a bad reputation and a fear of confronting a well-armed populace, the Iraqi police rely on the MPs to back them up in a pinch.

At times, though, the MPs seemed more aware of dangerous situations than the Iraqis. During one stop to search for car thieves at a cluster of repair shops, Campbell got nervous and told the Iraqi police they had to go.

The MPs just shook their heads at the eagerness of their patrol partners.

The MPs also are watching the Iraqi police closely to ensure they don&#8217;t revert to tactics they used before the war. Some of Baghdad&#8217;s residents clearly remember those days.

As the patrol cruised through one well-to-do neighborhood, a visibly shaken man rushed up to Campbell and told him that the Iraqi police in this patrol were well-known thugs in the neighborhood who continued to &#8220;torture&#8221; residents.

&#8220;They are [expletive] Baathists,&#8221; the man said, referring to the Baath Party to which former Iraqi leader Saddam Hussein and his loyalists belonged.

Campbell said he would refer the man&#8217;s complaints to his superiors.