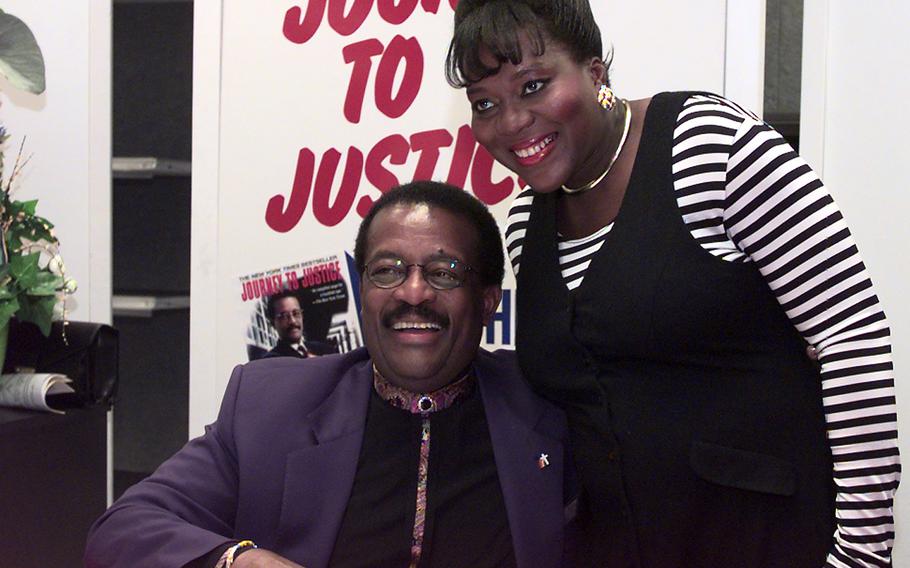 Buy Photo
In a 1998 photo, Rica Greig of Kaiserslautern has her photo taken with famed attorney Johnnie Cochran at the Vogelweh Post Exchange in Kaiserslautern. (Michael Abrams/Stars and Stripes)

HEIDELBERG, Germany — Johnnie Cochran can talk at length about his illustrious legal career and about his crusade for social change. He can leave an audience inspired and captivated by his words, his stories and his successes.

But open the discussion to a group of inquisitive teen-agers from Heidelberg High School, and you hear questions like these:

"Do you really believe O.J. Simpson is innocent?" one student screamed Monday from his seat in the school's packed auditorium. "If he didn't kill his wife, do you think he paid someone to do it?"

Another student asked, "What do you think of the American system of justice when O.J. is deemed not guilty in criminal court and guilty in a civil court?"

"To this day, I believe he's innocent," he said. "I knew the facts, and the 12 jurors who sat there for a year of their lives, earning 5 dollars a day, knew the facts, too."

It's been roughly 2½ years since Cochran, serving as captain of a legal "Dream Team," delivered the emotional closing arguments at what was dubbed The Trial of the Century. And while Cochran realizes he's most known for this high-profile case, he is quick to note the plethora of successes before and after he defended Simpson.

One of the best-connected lawyers in Los Angeles, Cochran's client list includes such figures as Michael Jackson and rapper Snoop Doggy Dogg. He represents victims of the 1995 Oklahoma City bombing and the 1996 ValuJet and TWA air disasters.

"I don't let people define me," said Cochran, who began his career in 1963 as a deputy city attorney for the city of Los Angeles. "I was practicing law for 33 years before Simpson. It's really just a small part of my life."

It also was a small part of his speech Monday afternoon.

Instead, he chose to talk about opportunity. He encouraged students, regardless of race, background or financial status, to overcome obstacles and strive for excellence.

"In this room, I see some great future leaders," he said. "It doesn't matter how others see you. It's how you see yourself. And if you're willing to pay the price, all of you at Heidelberg High School can soar like eagles."

For ninth-grader Marcus Mancini, Cochran's speech was enough to change his mind about the integrity of the Simpson case.

"After hearing him talk, I believe he is a good man and would not defend O.J. knowing he was guilty," he said. "Before, I was naive and based my opinion on popular opinion. If I were convicted of anything, I would surely want Johnnie Cochran on my defense team."

While Cochran's presence sparked renewed interest and mixed feelings about the Simpson case, most students were just glad he decided to visit their high school. He came to Germany last week to give the key presentation at the annual scholarship dinner of the Kappa Alpha Psi fraternity last weekend in Kaiserslautern. The annual dinner raises scholarship money for graduating high school seniors of Department of Defense Dependents Schools.

During his visit, he spoke at Ramstein and Heidelberg high schools. He also signed copies of his autobiography, Journey to Justice, at the Vogelweh and Heidelberg post exchanges.

"This brings a little bit of home to the students," said Mike Haley, cooperative work experience coordinator at the Heidelberg school. "So they don't feel quite so detached. Cochran's a controversial figure, and the students know that. Being overseas, they don't often get a chance to meet notable people."

Heidelberg Principal Lewis Johnson said that while he believes Cochran is a successful role model, he knows not all of his students agree.

"This was not a mandatory seminar," Johnson said. "But most students were excited about his visit and wanted to learn more about him."

Some students didn't bother to find out.

"I think it was a bum call," said John Ludwig, 16, who was leaving minutes before Cochran arrived. "He was being a lawyer for the wrong person, getting the wrong kind of justice served. I guess I can't hold that against him. He was getting paid, and it was his job."

But there is more to Cochran than legal cases. Outside the courtroom, he is the founder of one of the largest domestic violence centers in the nation and a financial supporter of several projects that fight homelessness in Los Angeles.

Said Cochran, "I practice what I preach.''