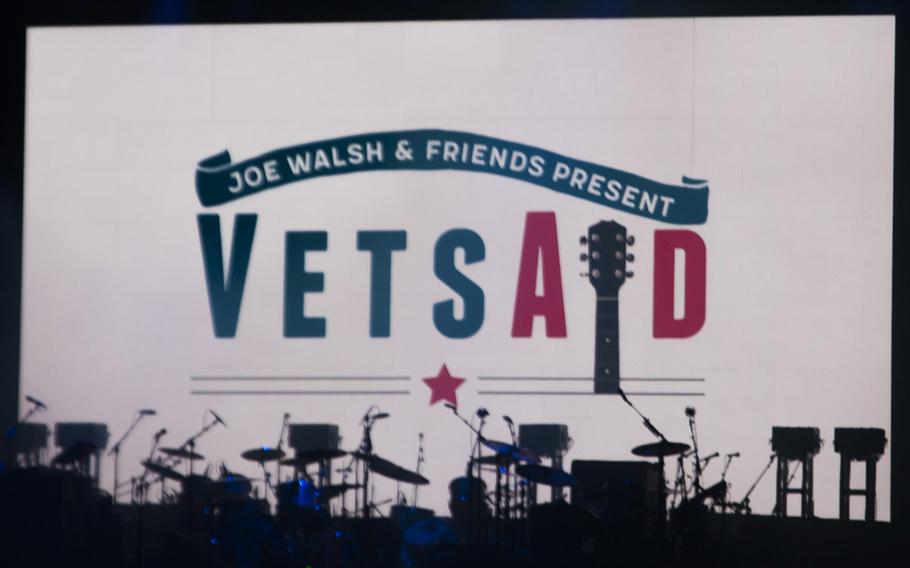 The stage is set for VetsAid at George Mason University in Fairfax, Va., Sept. 20, 2017. (Nikki Wentling/Stars and Stripes)

The stage is set for VetsAid at George Mason University in Fairfax, Va., Sept. 20, 2017. (Nikki Wentling/Stars and Stripes) 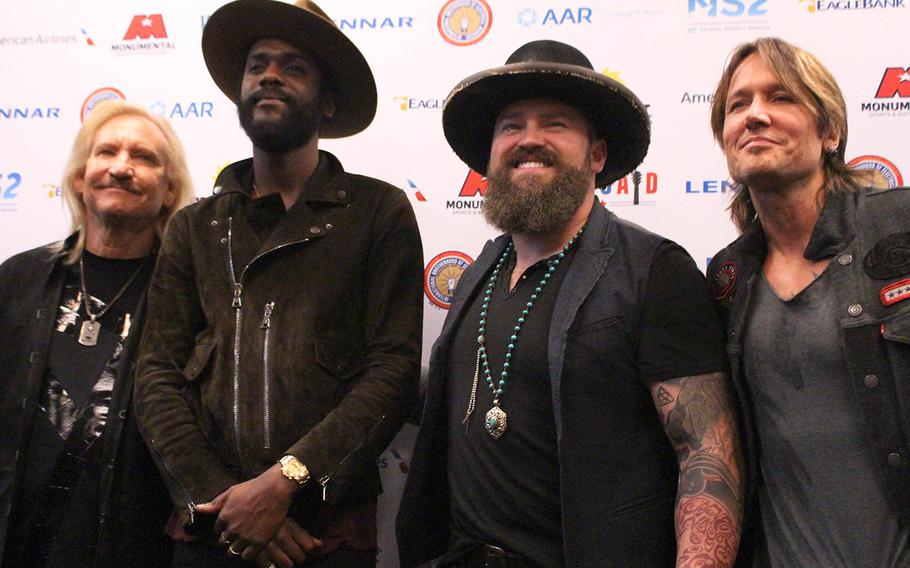 FAIRFAX, Va. – The first concert of an initiative by Rock and Roll Hall of Famer Joe Walsh to raise money for veterans featured uniformed servicemembers, a few dozen Gold Star families, countless guitar riffs and an appearance from a U.S. senator.

Walsh, Keith Urban, the Zac Brown Band and Gary Clark Jr. performed to several thousand people Wednesday at Eagle Bank Arena in Fairfax, Va., a setting that felt intimate despite its size when Walsh and Urban brought servicemembers on stage or spoke directly to the crowd about the cause that motivated them to participate in the charity event.

Before his performance, Walsh said he hoped the concert would be healing – for veterans, for families of fallen servicemembers and for himself. Walsh’s father, Lt. Robert Newton Fidler, died in Okinawa, Japan, in 1949 when Walsh was just 20 months old.

“Music is very healing,” said Walsh, a longtime member of the Eagles. “I think getting together and realizing that you all have something in common is the first step.”

At one point during the show, Urban beckoned a Navy SEAL on stage.

“Thank you so much for doing this for our veterans, and for our families,” the SEAL said.

Urban then performed “For You,” a song he wrote for Act of Valor, a 2012 film about SEAL Team 6 that was inspired by true events.

“Thanks vets and families for all you’ve done and all you do,” Urban said. “Thanks to Joe Walsh for sending out the bat signal.”

Walsh called the effort “VetsAid.” He also established a nonprofit of the same name to distribute proceeds from the concert to 18 veterans organizations across the country. He modeled it off Willie Nelson’s FarmAid, which benefits family farms. It was unclear Thursday how much money was raised from the concert.

Walsh is focusing some of the funds toward small, community-based groups.

“The smaller organizations between the coasts, those are the people I care about,” he said. “They’re the people in the trenches that don’t have any budget, and just to keep them going is huge.”

The audience was on its feet Wednesday night for most of the five-hour show, which ended with an encore highlighting the guitar skills of all four musicians.

Zac Brown paused during his hit song “Chicken Fried,” put the lights on the crowd and declared America the “best country in the world” to loud applause and “hooahs.”

During Walsh’s performance, a slideshow of bereaved servicemembers and homeless veterans played in the background. One member from each branch of the Armed Forces stood at attention on stage while Walsh performed the Eagles’ “Take It To The Limit,” which he dedicated to veterans.

About 50 people in red T-shirts sat together in the middle of the crowd, all of them family of fallen servicemembers from the Washington area. They were with the Tragedy Assistance Program for Survivors, or TAPS, one of the larger organizations benefiting from VetsAid.

“We’re all very excited about this,” said Ashlynne Hancock, a Gold Star daughter who works with TAPS. “We do a lot of serious events where we bring families together, but it’s nice to just be with other families.”

Walsh said he wants to expand VetsAid into an annual event. Musicians are already committed to a concert next year, he said.

“I hope it turns into something where we can really make a difference,” Walsh said. “To the vets out there… find an organization, ask for help and you’ll get it.”

Sen. Tammy Duckworth, an Iraq War veteran and Democrat from Illinois, introduced Walsh on stage Wednesday night. The two are friends, she said, and met in 2012 when Duckworth ran for Congress against another Joe Walsh, a former Illinois Republican in the Tea Party Caucus who criticized Duckworth’s military service.

The musician Joe Walsh stepped in and endorsed Duckworth. He also played a benefit concert for her that summer.

Duckworth, a Black Hawk helicopter pilot, lost both of her legs in 2004 when her helicopter was hit by a rocket-propelled grenade in Iraq. On Wednesday, she helped dedicate the concert to Walsh’s father and spoke about the importance of flight instructors.

Walsh said he grew up wondering what it would’ve been like if his dad survived. His father, and the struggles he sees with servicemembers returning from war now, prompted Walsh to step in, he said.

“We’re in an ongoing war with no end in sight, and the transition back to civilian life for so many veterans is a mountain that’s just too high to climb,” Walsh said. “It’s easy to feel alone, but I think vets should know there are people who deeply care about their situation, for example the musicians who are playing tonight. We really do care.”