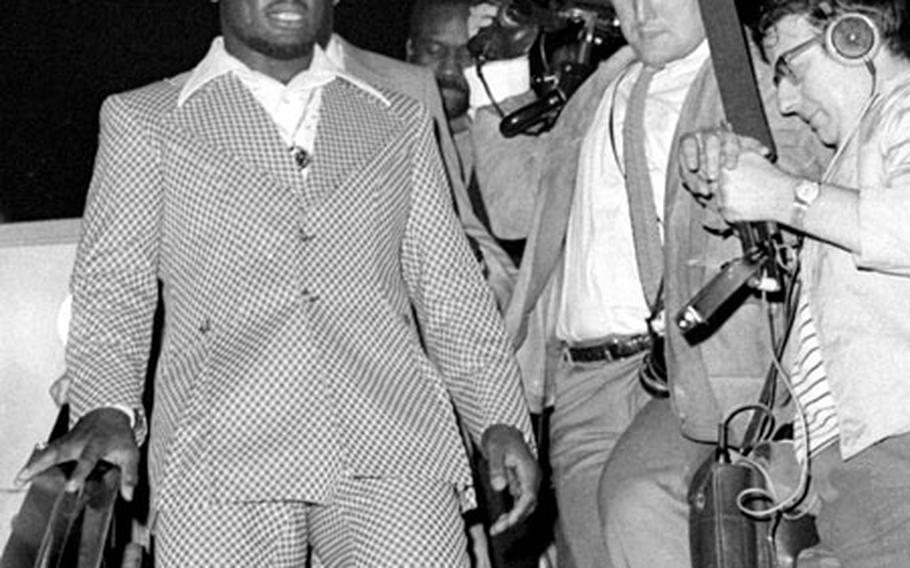 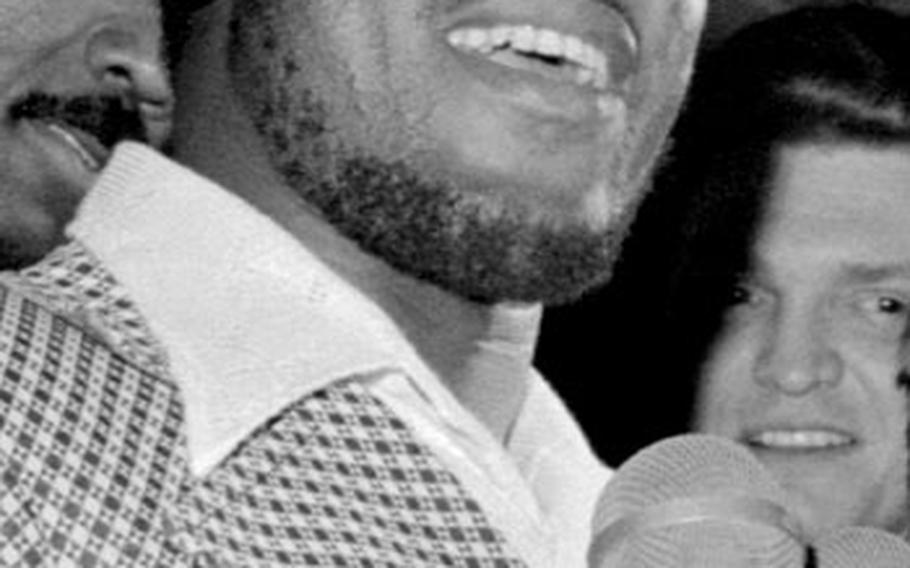 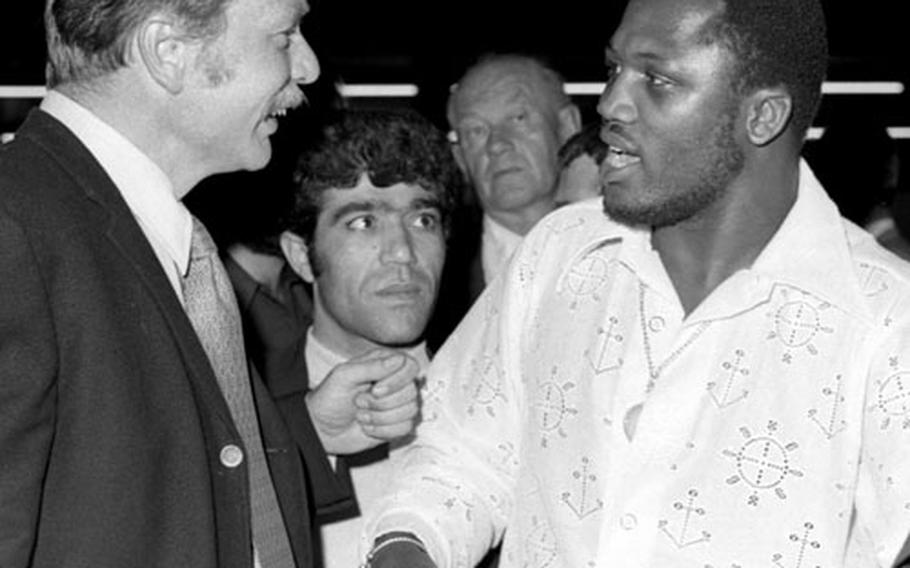 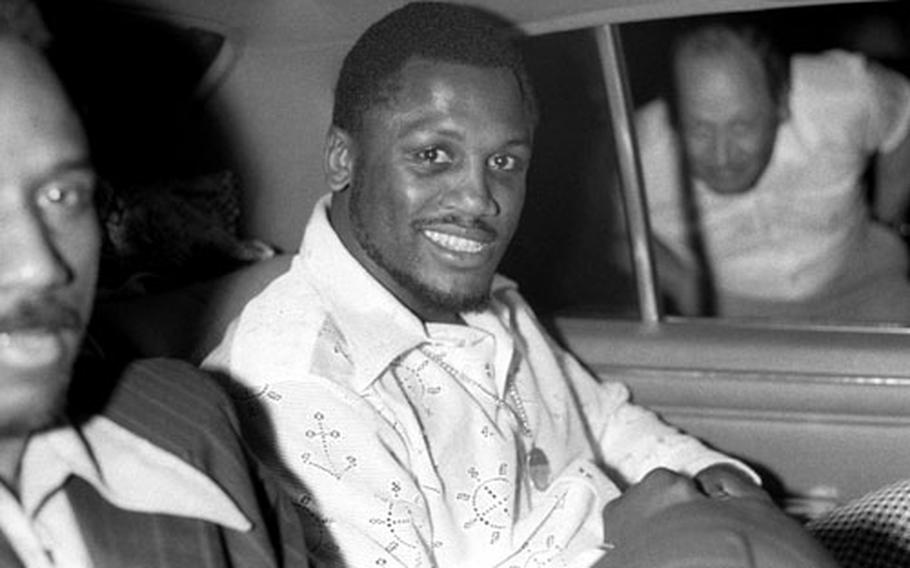 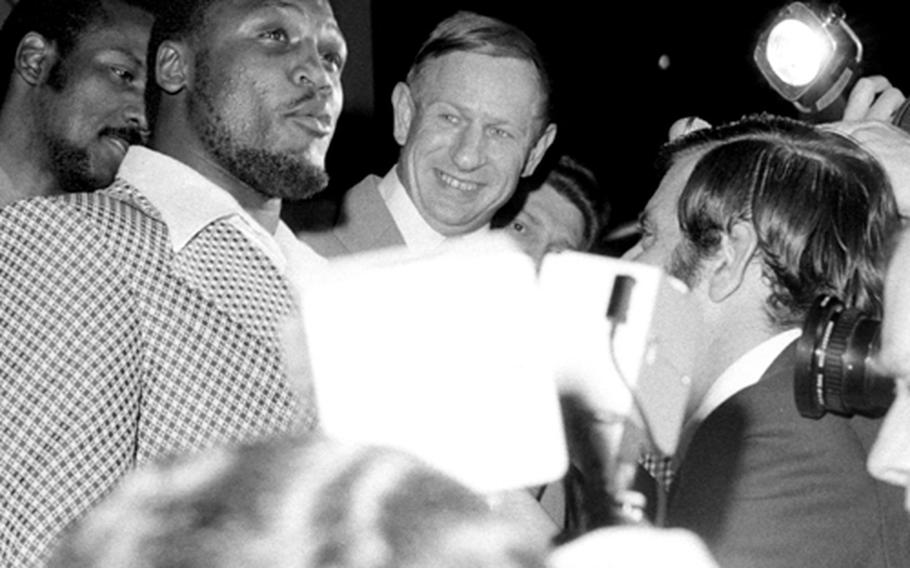 FRANKFURT — Singing Joe Frazier flew in here Friday night for a six-week European tour, in which he will use his voice instead of his fists, and announced that his blues-rock group, The Knockouts, will appear at Ramstein Air Base June 25.

The Ramstein concert, not announced previously, will be held in a base hangar, according to a spokesman for Frazier's group, and it will be the final stop on a tour that will take the heavyweight champion to cities throughout the Continent. The Frazier tour was to start Saturday in Amsterdam.

It was more a charming Joe than a smokin' Joe who set foot in Germany for the first time and said he "probably wouldn't fight again until next year." Earlier in the week an Associated Press story had said Frazier was looking for another bout in 1971.

Frazier, who gained worldwide recognition to go with his title when he decisioned Muhammad Ali March 8, said he wasn't choosy about his next opponent when and if he decides to defend his title. "I'm looking for anyone who wants to take that belt away from me," he said.

"Clay (Ali) can have his shot at it, and I know I can beat him again."

Frazier said he had already fought Oscar Bonavena twice and thought that was enough. And as for George Foreman, the top-ranked heavyweight contender, the champ said he thought it was too early for him to have a shot of the title. "But if he wants a crack at it I'll give it to him."

Then with a big smile and sweep of his hand, Frazier announced, "But right now I'm here for music.

Frazier gave the nod to singing over boxing as the tougher work. "But they're both pretty hard games, ' he added.

The South Carolina — born champ pointed out that when he's singing, he is on stage working for 45 minutes at a stretch — as much time as a 15-round fight, without between-round breaks.

According to a Stars and Stripes story earlier this week, Frazier nearly chose the Air Force as a career instead of professional prizefighting or singing. According to the story, confirmed by Frazier here on his arrival, he was ready to join the Air Force in 1964, but then Buster Mathis broke his hand in an exhibition before the Olympics and Frazier replaced Buster as the U.S. heavyweight, going on to win a gold medal at Tokyo.

The Olympic gold medal was Frazier's springboard into an unbeaten career in pro boxing. But it all began back in 1962 when Yank Durham, now his manager, spotted Joe in a Philadelphia gym.

And where did the music career begin? In Beaufort, S.C., according to Joe, who says it started when his mother introduced him to "the church sound."

"I love to sing," says Frazier, who is sporting a slight beard. "You can blame my mom and dad far that."

Somebody asked an Ali-like question: "Who's the greatest ... singer?"

"You better believe that's me," he said.

Nobody asked him who the greatest fighter was.