Job pool expanding for US troops interested in heading Down Under 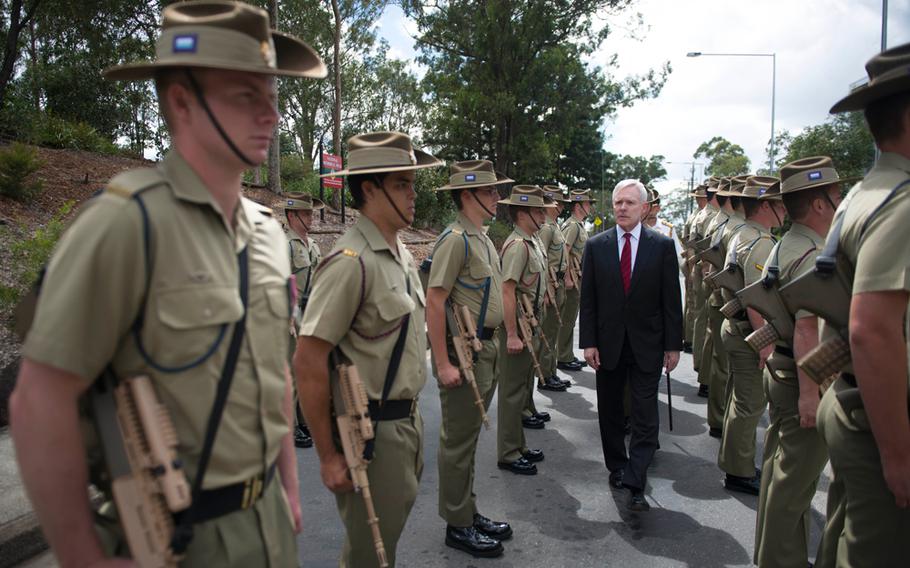 Secretary of the U.S. Navy Ray Mabus reviews troops with the Royal Australian military during a visit to the country, Feb. 2, 2014. (Arif Patani/U.S. Navy)

Secretary of the U.S. Navy Ray Mabus reviews troops with the Royal Australian military during a visit to the country, Feb. 2, 2014. (Arif Patani/U.S. Navy) Australian army soldiers take a ride with members of the 1st Cavalry Division command staff and the 1st Cavalry Division Horse Cavalry Detachment on March 20, 2014. As the U.S. is looking to trim the number of troops serving in the military, the Austrailian Defence Force is recruiting U.S. servicemembers join its ranks. Many troops, especially enlisted servicemembers, stand to make more money in the Australian military. (Ken Scar/U.S. Army)

YOKOTA AIR BASE, Japan — The Australian Defence Force, which expects to double its budget over the next decade, is looking for even more foreign military members willing to serve Down Under.

Australian media reported last month that the government plans to increase defense spending — estimated at $26.5 billion this year — to $50 billion by 2023.

More money means more troops will be needed, and the Aussies continue to look outside their own country for help filling the ranks.

In most cases, the Australian Defence Force looks to overseas candidates to fill gaps that are currently not being satisfied by standard recruitment practices, according to the Defence Force’s website.

“We recognize that these candidates can bring skills and attributes to the Navy, Army and Air Force that will strengthen their overall operation and success rate,” the ADF website states.

Defense officials say that hundreds of U.S., British, Canadian and New Zealand troops have transferred to the Australian military in recent years.

In the last 10 years, the Australian air force recruited more than 220 overseas personnel under the lateral transfer scheme, officials said. Since 2010, the Royal Australian Army has employed more than 100 foreign servicemembers through the program, according to the Australian Defence Ministry.

Royal Australian Navy personnel director Commodore Peter Laver said his navy will grow over the next five years and that it’s looking for officers and sailors to transfer from U.S. ranks. The Australians are particularly interested in submariners and people with experience in combat systems that are used in combined operations with the U.S. Navy, he said.

In the next decade, the Australian Navy will develop new amphibious warfare, air warfare helicopter systems and submarine capabilities. It’s using lateral recruitment to fill ranks and specializations that can enhance those capabilities.

“There are also ongoing opportunities at sea and ashore to support submarines, frigates, patrol boats as well as general engineering, project management and warfare capabilities,” the Defense Force website states.

One former U.S. servicemember who joined the ADF through the program is Capt. Thomas Tilque.

A veteran of 10 years in the Marine Corps, Tilque was based in California and Okinawa and deployed to Iraq in 2003 and 2005 and Afghanistan in 2010 before transitioning to the reserves in 2011.

A 2012 Stars and Stripes story about Australian recruiting sparked Tilque’s interest, he said.

“I saw it as a once-in-a-lifetime opportunity,” he said.

Australian citizenship and the experience of working Down Under were part of the attraction, he said.

“If I had waited a couple of years, I don’t know if (the program) would still be around,” he said. “I went to the Australian Defence Force lateral recruitment website and followed the steps.”

In August 2012, Tilque traveled to England for a face-to-face interview. It took about 15 months to complete all of the paperwork and a visa application and he began serving in October last year.

Tilque was assigned to the 2nd Combat Engineer Regiment in Brisbane, a large city on Australia’s east coast.

Working with the Australians isn’t vastly different than life in the Marine Corps, he said.

Brisbane is “similar to San Diego,” but hotter and more humid in summer, he said.

Pay and benefits in the Australian Defence Force — which include subsidized housing and free health care — are on par with what Tilque received as a Marine, he said.

Right now he’s gearing up for his first field exercise with the Australians. He expects to be involved in exercises with coalition partners from the U.S., Britain and New Zealand, he said.

There’s a good chance he’ll run into U.S. Marines before too long. About 1,200 will deploy to the Northern Australian city of Darwin this summer with plans to send 2,500-strong Marine Air Ground Task Forces there on six-month rotations each year from 2016.

The Australians have been friendly and easy to talk to, Tilque said.

“A lot of Australians, whether civilians or military, have either visited the States or worked with U.S. forces in Iraq or Afghanistan,” he said.

Tilque has signed up for six years — the standard commitment for officers — and plans to reassess his options after that.

Laver, the Australian Navy personnel director, said ADF personnel do not receive the sort of retirement benefits that U.S. personnel are eligible for after 20 years of service. Instead, they contribute part of their pay and receive a lump sum at the end of their service.

With the U.S. defense budget shrinking, thousands of U.S. troops will soon be forced to look elsewhere for a job. Heading Down Under might be just the answer, Tilque said.

“With the downturn in the U.S. military, maybe people are looking to stay in a military environment,” he said. “This is an opportunity that is unique in the world.”

This year’s deadline for lateral transfer applications for the Australian Army is May 31. Closing dates for Royal Australian Navy overseas recruiting applications this year are July 1 for submariners and Dec. 1 for other applicants, the website states.

Applicants must satisfy normal Australian citizenship conditions and will be required to complete a series of selection requirements. The Australian government covers the cost of visa applications and moving expenses.

“Previous experience is an asset to their new employment,” he said. “We have a lot to learn from their background and we teach them about life in Australia.”