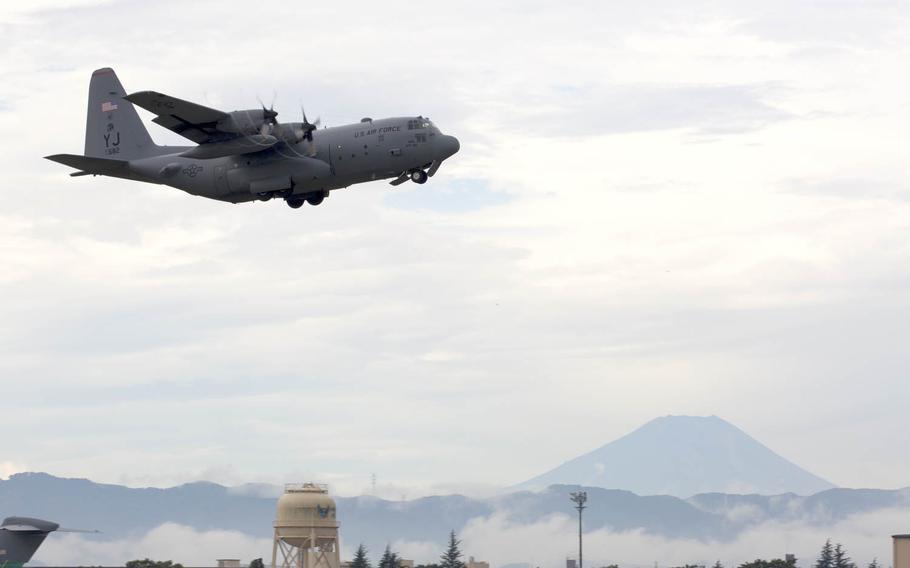 A C-130 Hercules takes off from Yokota Air Base, Japan, with Mount Fuji in the background, Oct. 2, 2015. Japan will contribute an average of $1.54 billion over the next five years toward payment of Japanese worker salaries and base utilities, according to a Defense Ministry statement outlining the new host nation support agreement that takes effect in April. (Yasuo Osakabe/U.S. Air Force)

Japan will contribute an average of 189.3 billion yen ($1.54 billion) over the next five years toward payment of Japanese worker salaries and base utilities, according to a Defense Ministry statement outlining the new host nation support agreement that takes effect in April.

The funding is slightly higher than the annual average of 188.1 billion yen reached in the previous 2011 deal, though a stronger yen made that agreement worth $2.02 billion at the time.

The bilateral deal calls for Japan to pay salaries for up to 19,285 workers focused on equipment maintenance and related administrative services, a 1,068-job increase over the 2011 agreement.

The new maintenance funding is an effect of the U.S. decision to shift more of its ships, planes and other resources to the Asia-Pacific region as part of its global “rebalancing” effort, Japan Defense Minister Gen Nakatani told reporters during a briefing last week.

“The need [for those workers] increased, considering that they are the ones that directly support the U.S. forces to exert their capability,” Nakatani said.

Japan Prime Minister Shinzo Abe’s government has voiced support for the rebalance, citing what it has repeatedly deemed an “increasingly severe” regional security environment. Threats include North Korea’s continuing development of missiles and nuclear weapons, as well as China’s claim on the Japan-administered Senkaku Islands.

The priority placed on maintenance came at the expense of Japanese workers at Morale, Welfare and Recreation facilities, some of whom face potential job losses over the next five years.

The agreement provides salaries for up to 3,893 workers, 515 fewer than in the previous agreement.

Japanese lawmakers also criticized use of federal funds to pay for leisure activities in 2011, when the finalized agreement cut about 2 percent of the Japanese workforce on bases.

However, the addition of the new equipment-related positions bring total Japan-funded base jobs up to more than 23,000, or about the same figure prior to the 2011 cuts.

The job-funding changes will be staggered over five years, Japanese officials said.