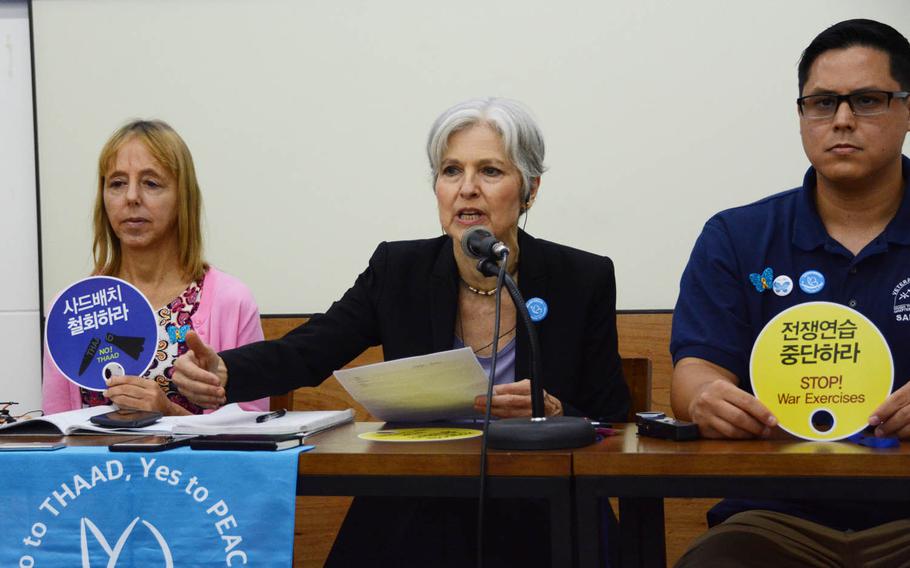 SEOUL, South Korea — Former U.S. presidential candidate Jill Stein called for a halt to the deployment of an advanced U.S. missile defense system in South Korea, saying it’s more likely to stoke a conflict than protect people against the North.

Stein, who ran on the Green Party ticket last year, led a group of high-profile activists to the peninsula this week to give a boost to South Korean opponents of the Terminal High Altitude Area Defense system known as THAAD and to urge diplomacy over military action in dealing with North Korea.

“THAAD does not provide protection to the 25 million people in Seoul. It will, however, inflame already dangerous tensions between South Korea and the United States against North Korea, China and Russia,” she said Tuesday at a news conference in Seoul.

Stein was referring to criticism saying the battery is positioned mainly to protect U.S. forces in the southern area instead of the bulk of the population in the South Korean capital, which sits just about 35 miles from the heavily fortified border that divides the peninsula.

U.S. military officials say THAAD is designed to work as part of a layered defense system in conjunction with Patriot missiles already placed to protect the Seoul metropolitan area.

“Stopping THAAD is the first step towards diplomacy to lay these conflicts to rest and to move forward towards peace, reunification and a peace treaty between the North and the South,” Stein added.

The activists — including Medea Benjamin, co-founder of Code Pink; Will Griffin of Veterans for Peace; and Reece Chenault of U.S. Labor Against War — also called for an end to joint war games conducted on a regular basis by South Korea and its U.S. ally.

Washington and Seoul agreed last year to station THAAD in the remote southeastern area of Seongju to counter a growing threat from North Korea, which has conducted a series of nuclear and missile tests. But the plan has met with fierce local opposition from residents who fear possible negative health and economic effects.

“The real solution is to stop the operation of THAAD right now, do the environmental-impact study, make sure that that study is made public and make sure that there is an expert task force and independent international experts who can examine and respond to the study,” Stein said.

China and Russia also have lined up against the anti-missile battery, raising concerns it could upset the geopolitical balance in the region. Beijing suspects the radar could be used against its military, which has strained its relationship with South Korea.

U.S. military officials insist THAAD is meant solely as a defensive measure against North Korea and will maximize protection of the entire country, including the southern region.

“Over 10 million (South Korean) citizens are protected because of the location that was selected that optimizes the capabilities of the THAAD,” Lt. Gen. Thomas Vandal, 8th Army commander, said earlier this month. He added that key seaports and other facilities would also be covered.

The U.S. military installed the radar and two launchers in an overnight operation in late April, just over a week before President Moon Jae-in won a snap election and took office following the ouster of his predecessor, Park Geun-hye, in a corruption and influence-peddling scandal.

Moon has suspended the further deployment of four more launchers and other components pending an environmental review, but he reassured the Americans that it was a temporary measure and he was not withdrawing from the agreement.

Griffin said his experience as a former soldier in Iraq and Afghanistan showed him that true peace can’t be obtained by bombs or weapons systems.

“True peace is building the unity in our communities,” he said.

The group, which issued a statement it said was endorsed by more than 250 activists and dignitaries worldwide, was traveling later Tuesday to Seongju to show solidarity with protesters there.

About 28,500 servicemembers are stationed in South Korea, which remains technically at war with the North after their 1950-53 conflict ended in an armistice instead of a peace treaty.