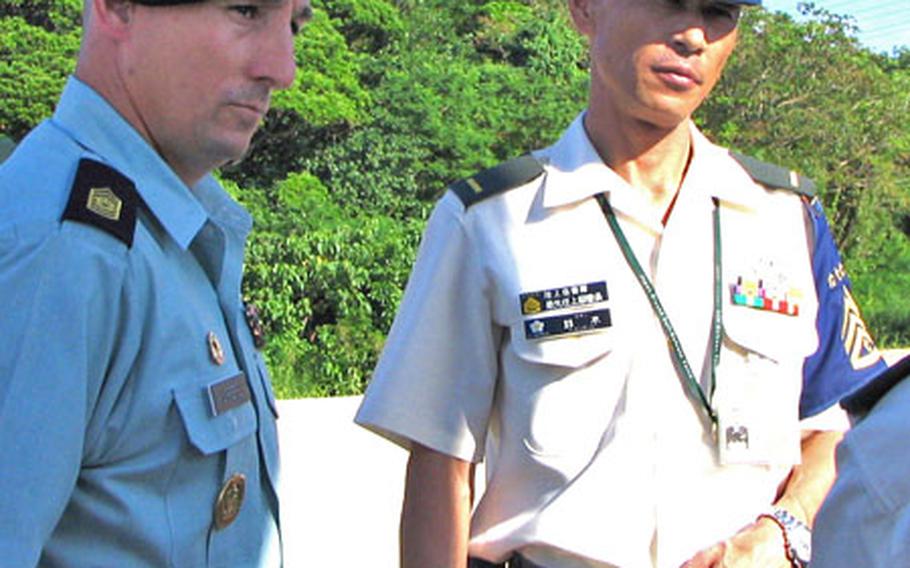 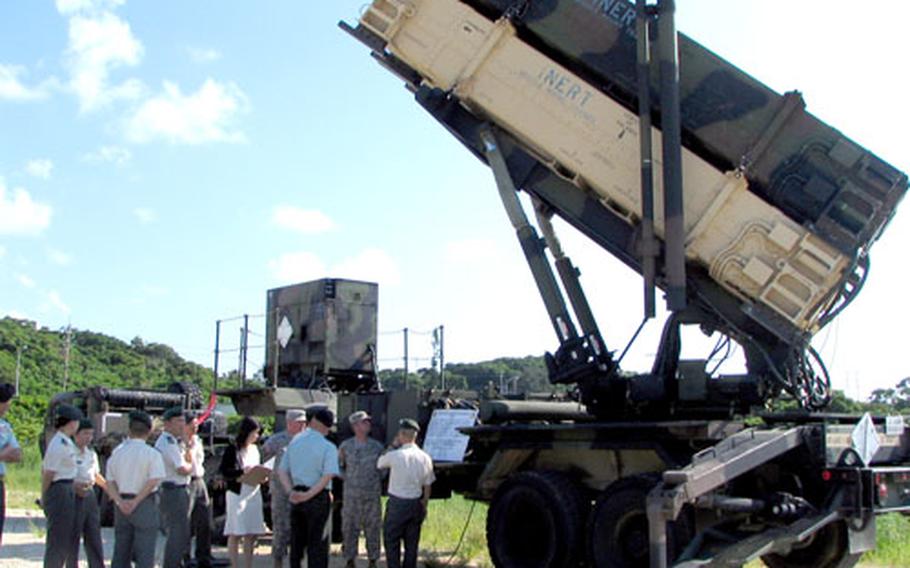 Japanese Ground Self-Defense Force personnel tour the U.S. Army&#39;s PAC-3 missile site on Kadena Air Base on Friday. They were on Okinawa for a reunion of graduates of the U.S. Army&#39;s Sergeant Major Academy at Fort Bliss, Texas. (David Allen / S&S)

It is the last of the three self-defense services &#8212; after the air and maritime forces &#8212; to initiate such a study, but the jury is still out concerning permanently adopting the concept of assigning senior noncommissioned officers as the top senior enlisted adviser to commands.

It&#8217;s an idea that&#8217;s been brewing for quite some time, said some of the JGSDF sergeants major who gathered Friday on Okinawa for a reunion of graduates of the U.S. Army&#8217;s Sergeant Major Academy at Fort Bliss, Texas.

Someday they hope to be as effective and influential as their American counterparts, some said privately during a day of activities that included a tour of a U.S. Army Patriot missile sites on Kadena Air Base.

No decision has been made, said a Defense Ministry spokesman, stressing that Japan has yet to decide when to officially launch the sergeant major system within the self-defense forces. The maritime and air branches initiated studies several years ago and the ground branch began its own study last year.

&#8220;To enforce thorough discipline, there is a growing importance of sergeant major-class leaders,&#8221; said Yuki Karigome, a ministry spokesman. &#8220;Also, to respond to major disasters or terrorist activities, operations based on smaller units are expected to increase in the future.&#8221;

Those units would be led by senior noncommissioned officers. Currently, warrant officers take on such duties, he said.

Command Sgt. Maj. Michael D. Kuppers, the lead NCO for the 1st Battalion, 1st Air Defense Artillery Regiment, which mans the PAC-3 missiles on Kadena, graduated from the academy in 2004 with some of the Japanese and Filipino sergeants major attending Friday&#8217;s reunion.

&#8220;At the battalion and higher levels, the command sergeant major is the principal adviser to the commander on all enlisted matters,&#8221; Kuppers said. &#8220;It&#8217;s a concept that is not part of the Japanese military culture, where there&#8217;s a sharp distinction between the officer and enlisted ranks.

&#8220;By sending their sergeants major to our academy tells you how serious they are about adopting our system,&#8221; he said.

Kuppers guided the 41 Japanese, Filipino and American graduates of the academy on a brief tour of the missile site.

&#8220;The single-most value of having a sergeant major and command sergeant major system is having the experience of coming up through the enlisted ranks,&#8221; Kuppers said. &#8220;Something we tell all of our leaders is you have to have done it &#8212; been a private &#8212; to understand it. The officers will never know what that young soldier&#8217;s going through to execute the mission.&#8221;

Warrant Officer Samuel Nakano, liaison officer for the Japanese Ground Self-Defense Force at Camp Naha, was the oldest graduate of the academy to attend the reunion, graduating in the first class to have Japanese soldiers in 1995.

&#8220;We learned a lot, but we need to make our own Japanese-style sergeant major system,&#8221; he said. &#8220;The academy was our first experience with U.S. soldiers. Everything was new to me. It was like trying to open a sliding shoji door by pushing it. The approach to problems was different.&#8221;

Just as the approach to a sergeants major system in the JGSDF will be a bit different, he added.