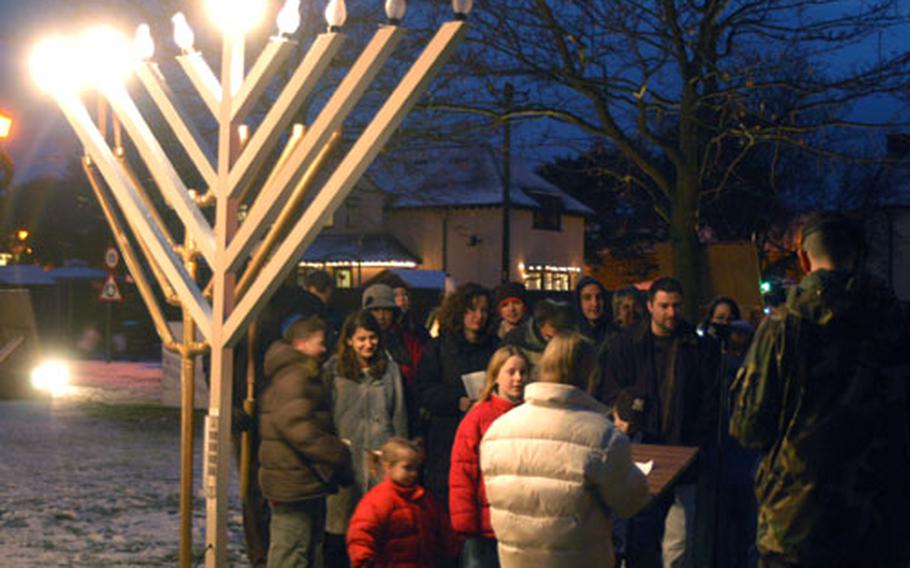 In the light of three electric Hanukkah candles Tuesday at RAF Mildenhall, England, members of the local Jewish community gathered for the menorah lighting on the base. (Ben Murray / S&S)

The following correction to this story was posted Dec. 29: "A Dec. 28 story about the menorah-lighting ceremony at RAF Mildenhall incorrectly identified the presiding rabbi at the ceremony. He was Army Chaplain (Capt.) Henry Soussan from the 105th Military Intelligence Battalion based at RAF Menwith Hill, England."

RAF MILDENHALL, England &#8212; The timing was off for a white Christmas in England this year, but airmen and family members in England gathered in the year&#8217;s first snow for a menorah lighting ceremony Tuesday.

Set amid a series of Christmas decorations on an open lawn on the base, the ceremony was somewhat indicative of the Jewish community&#8217;s activities at Air Force bases in the United Kingdom and, for the most part, among U.S. forces overseas. It was small and intimate, and cobbled together from the mix of food and donated traditional items associated with the faith.

The presiding rabbi at the Mildenhall ceremony was, for instance, a man from a London synagogue, who read prayers at the lighting because the only Jewish Air Force member of the chaplaincy in England lives in Menwith Hill, several hours&#8217; drive from the base. The Air Force&#8217;s only rabbi in Europe lives in Germany, according to one member of the local Jewish community.

After Mildenhall&#8217;s Jewish chaplain rotated out of the area in the summer, that left 1st Lt. David Amar to coordinate local religious events. Amar said he keeps in touch with around two dozen Jewish families in the area. About 30 people attended Tuesday&#8217;s ceremony.

At the gathering, Rabbi Moshe Mueller read prayers at the lighting of the menorah or Hanukkiah, the traditional nine-candle arrangement that symbolizes the miraculous light of Jewish history.

A lamp with oil enough for only one day burned for eight days by divine intervention at the rededication of the Temple by the Maccabees after their victory over the Syrians. That miracle is celebrated in the eight days of Hanukkah, Amar said.

Tuesday marked the third day of the holiday, but was not chosen as the day of the lighting for any religious significance, Amar said.

It was just the easiest day for the majority of the small local community to get together, he said.