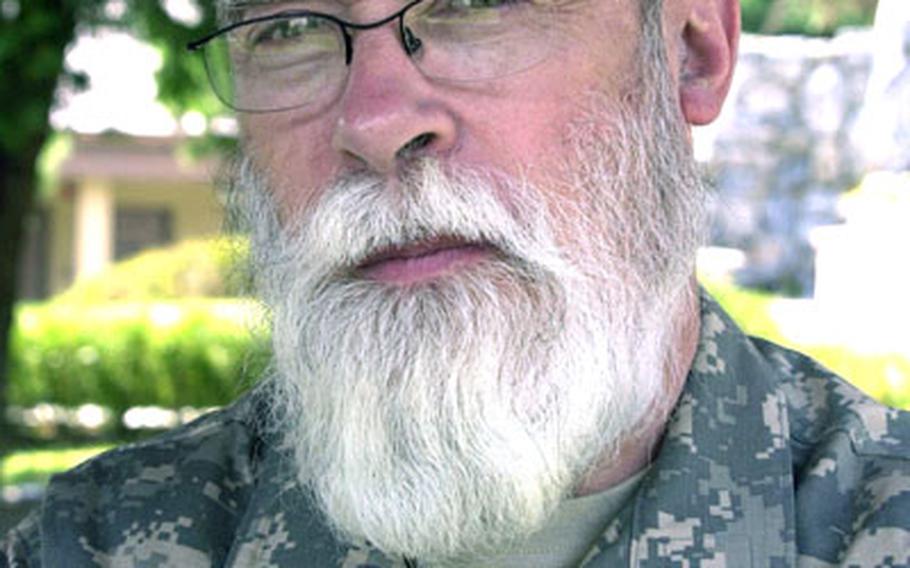 Col. Jacob Goldstein, a reservist from Brooklyn, N.Y., is in South Korea to head up rabbinical duties during the Jewish High Holy Days of Rosh Hashana, Yom Kippur and Sukkot. (T.D. Flack / S&S)

SEOUL &#8212; Servicemembers walking around Yongsan Garrison or the Religious Retreat Center these days may see something they&#8217;ve never seen before: a colonel with a beard.

As an orthodox Jew, Goldstein obtained the grooming exemption on religious grounds.

A reservist from Brooklyn, N.Y., he is in South Korea to head up rabbinical duties during the Jewish High Holy Days of Rosh Hashana, the Jewish New Year observation that started at sundown Friday, and Yom Kippur, the Day of Atonement on Oct. 1, as well as during Sukkot, a festival commemorating pilgrimages to the ancient temple in Jerusalem, which begins Oct. 7.

He describes the High Holy Days as a time to reflect on the past year and pray for a better year to come. Five years ago, Goldstein shared those same sentiments in New York amid the destruction of the Sept. 11, 2001, terrorist attacks.

For more than five months, Goldstein, then in the New York National Guard, served as chief of chaplains at ground zero in New York, starting just hours after the World Trade Center attacks. He arrived at the scene not long after the second tower fell.

Chaplains were in very high demand among the National Guard units containing the area, Goldstein said. He set up a headquarters and put chaplains on 12-hour shifts.

&#8220;Teams were available to the soldiers on duty and, of course, if civilians were to ask for assistance, we did not differentiate in this mission,&#8221; Goldstein said.

The tragedy spurred some rescue workers at the scene to turn closer to faith, Goldstein said. For others, it prompted questions about how God could allow such things to happen.

But, Goldstein said, among things that struck him most was the dedication of the workers on the scene. He said many literally had to be forced off the scene for their own health &#8212; chaplains included.