Trumpeter Bobby Shew, who got his start playing with the Army, offered clinics to the U.S. Army Europe band this week and performed with them Wednesday in Eppelheim, Germany. (Rick Scavetta / S&S)

Trumpeter Bobby Shew, who got his start playing with the Army, offered clinics to the U.S. Army Europe band this week and performed with them Wednesday in Eppelheim, Germany. (Rick Scavetta / S&S) 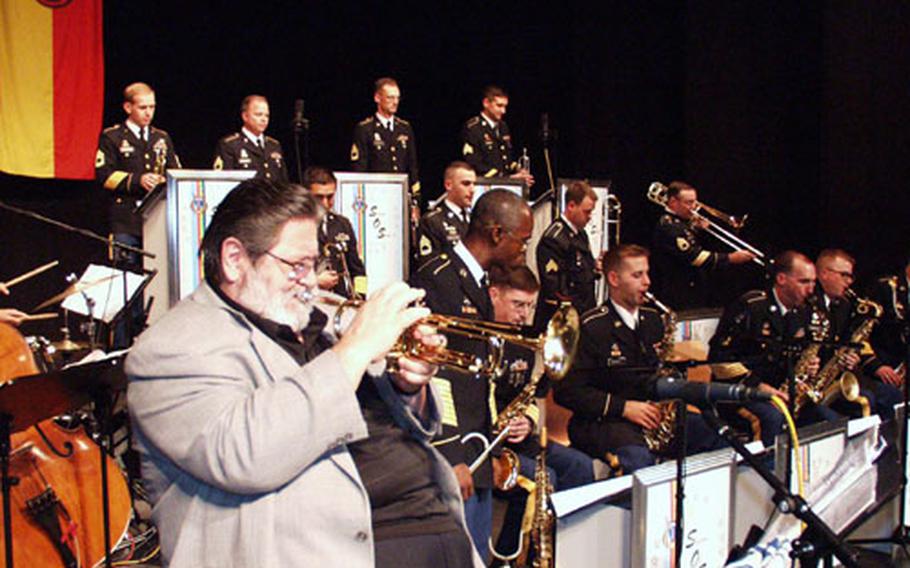 HEIDELBERG, Germany &#8211; A jazz legend spent some time with the U.S. Army Europe band this week, offering clinics and a chance to jam.

Trumpeter Bobby Shew taught during two clinics, then performed in concert Wednesday at the Rudolf-Wild Hall in Eppelheim. During daylong sessions on Tuesday and Wednesday, Shew instructed about 40 troops from the USAREUR and 1st Infantry Division bands.

Lt. Col. Tom Palmatier, commander of the USAREUR band, gave Shew a certificate of appreciation for his continued patriotic service.

Facing the draft in 1960, Shew said he enlisted for a choice of assignment: the newly formed NORAD band in Colorado Springs, Colo.

After his discharge, Shew played a stint with the Tommy Dorsey Band before moving on to play with Woody Herman, Della Reese and Buddy Rich. In 1972, he moved to Los Angeles and focused on jazz. There he also recorded music for movies and television.

At one point Shew began giving impromptu lessons to younger players, and he has been teaching ever since. Teaching one&#8217;s craft is a &#8220;moral responsibility,&#8221; Shew said.

While he still tours internationally, Shew often lectures at music schools worldwide. Many times over the past few decades his teachings took him to military bases.

&#8220;Working with this band was really easy, because they are so good. Often I&#8217;m teaching to college students, but these guys are old salts already. They really know how to play.&#8221;

&#8220;Sometimes I get away from jazz and listen to other styles, like Himalayan mating ritual music,&#8221; Shew said, followed by a chorus of laughs from the troops. While much of Shew&#8217;s lessons focus on brass instruments, he offered ideas that any musician can relate to, such as the need to listen to a wide variety of music.

Staff Sgt. Brad Willis, 33, of Memphis, Tenn., plays the bass, and even he picked up a few pointers.

While the clinic helped, Willis looked forward to playing live with Shew, who would enhance the performance, Willis said.

The youngest member of the jazz band, saxophonist Spc. Thomas Jackson, 24, eyed Shew during his solos, focusing on his improvisations.