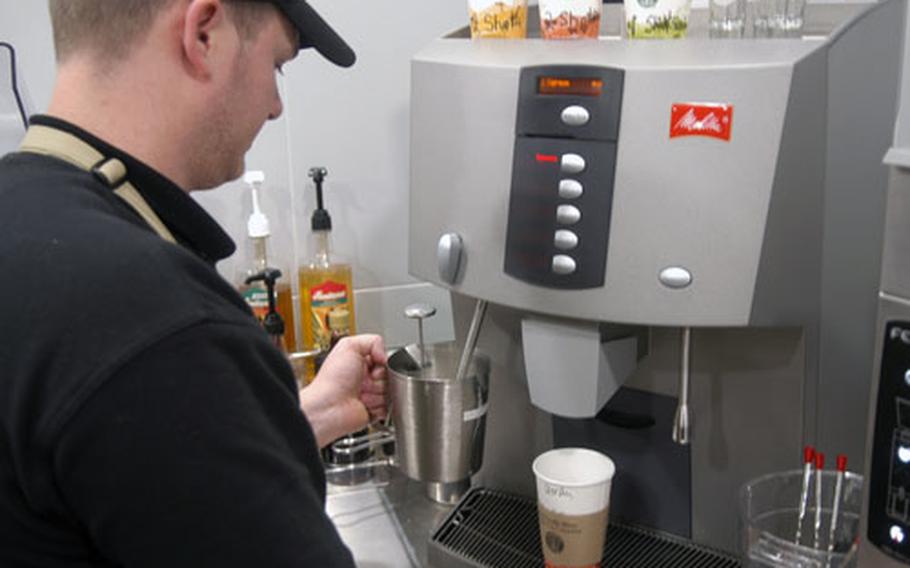 Timothy Seigle operates the new espresso machine at the Java Cafe in Baumholder, which opened Thursday. The Java Cafe is a separate franchise but it is authorized to serve Starbucks coffee blends and snacks. (John Vandiver / S&S)

Timothy Seigle operates the new espresso machine at the Java Cafe in Baumholder, which opened Thursday. The Java Cafe is a separate franchise but it is authorized to serve Starbucks coffee blends and snacks. (John Vandiver / S&S) 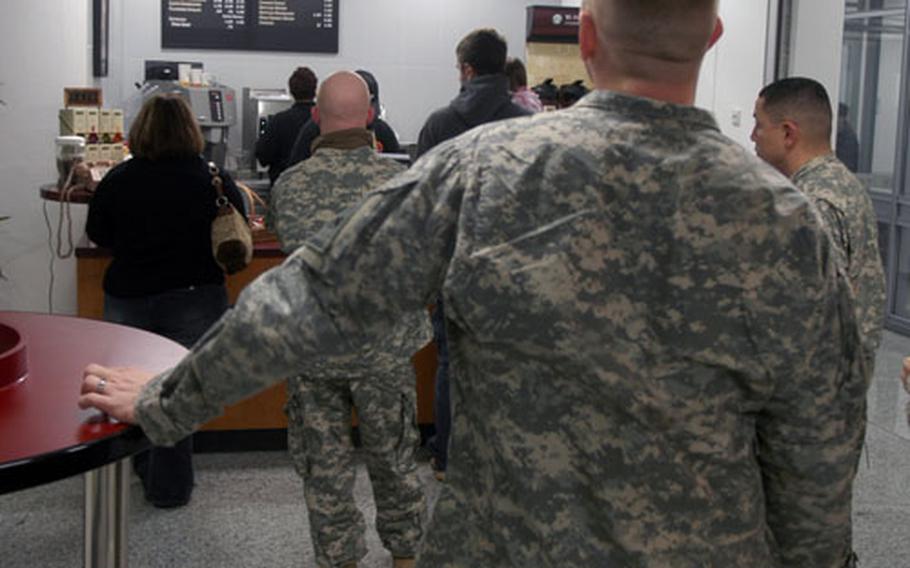 Soldiers wait in line to try one of the offerings at the new coffee shop in Baumholder. Lattes, cappuccino and espresso are all on the menu, adding a little java variety to the base. (John Vandiver / S&S)

BAUMHOLDER, Germany &#8212; Melissa Grant and Elisa Caro, two Baumholder Army spouses, sat over their steaming Starbucks brews and leisurely chatted about the kids, the upcoming holiday and places to look for a last-minute Christmas tree.

The Java Cafe on Smith Barracks, quietly opened Thursday and word has been quickly spreading around base.

In Baumholder, where laments about a shortage of quality-of-life amenities are commonplace, the arrival of the new coffee shop has sparked a flurry of interest.

The cafe, which is part of the $700,000 Community Information Center at the base post office, is designed to serve as a social hub for residents, according to garrison officials. In addition to the Starbucks coffee, there&#8217;s a wireless zone complete with online gaming terminals.

The Sato Travel office and VAT office also are located at the center, which is still being renovated. There also are plans for an area where Family Readiness Group information will be available and booths where FRG members can meet while soldiers are deployed next year.

Plasma TVs and couches are also on the way, which will make for a cozy atmosphere, said Java Cafe manager Sheila Moncriel.

First Lt. Scott Pearl of the 2nd Brigade, 1st Armored Division dropped by the cafe Friday with some colleagues after hearing about the shop at his office.

While the Java Cafe is a separate franchise, it&#8217;s authorized to serve Starbucks coffee blends and snacks, which Baumholder residents have been lining up to devour.

For Caro and Grant, the new the cafe, which will be open 7 a.m. to 6 p.m., is a place to kick back and catch up with friends.

As for Pearl, the enticement of a double espresso could be the incentive for avoiding the occasional scolding from the post office staff around the corner.