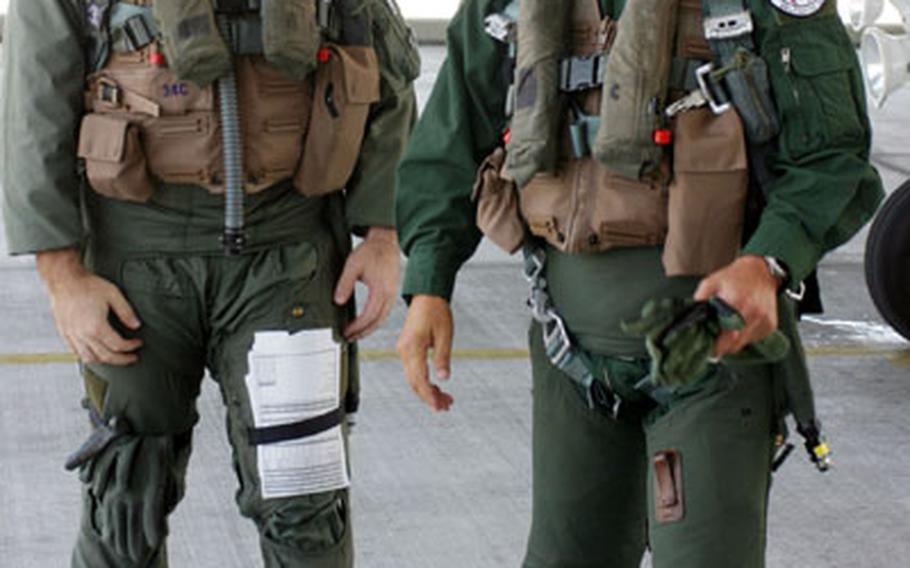 KADENA AIR BASE, Okinawa &#8212; A Japan Air Self-Defense Forces general took to the skies over Okinawa in a U.S. Air Force F-15C Eagle fighter jet Tuesday to get a close-up view of tanker-refueling operations during Cope North 2004.

Being part of the bilateral training was a &#8220;great firsthand experience,&#8221; Oda told reporters during a news conference after the flight.

&#8220;It was good to see and feel it on my own. You can plan and prepare for the exercise, but once you are up in the skies, you may encounter various different factors that are not in the scenarios.&#8221;

The Cope North exercise is held jointly with the Japan Air Self-Defense Forces up to twice a year. The previous one took place in November 2003 at Andersen Air Force Base, Guam. The last Cope North in Okinawa was in April 2002.

U.S. Air Force units participating in the drills include F-15C Eagles, KC-135 Tankers and an E-3B/C AWACS from Kadena&#8217;s 18th Wing; air-traffic control personnel from Misawa and Kadena; and exercise staff from Headquarters 5th Air Force. Japan Air Self-Defense Force units will include F-4 Phantoms from Naha Air Base, F-15Js from Hyakuri Air Base and an E-767 AWACS from Hamamatsu Air Base.

Okinawa is one of the JASDF&#8217;s major sector operations centers at Naha and home to Kadena Air Base, the largest U.S. air base in Asia.

One variable Oda experienced was the language barrier.

But thanks to his co-pilot, he felt comfortable.

Oda said the joint training was extremely significant from the aspect of defense cooperation of the two nations.

&#8220;On the premise that Japan works together with the U.S. military in the event of a contingency, a joint exercise such as this is extremely important,&#8221; he said.

Such joint training on a regular basis promotes better communications and helps to enhance mutual understanding and trust, he said.

And, he added, &#8220;Through the exercise, we can learn various things from U.S. Air Force. Skills that the Air Force has developed through various battle operations are precious for JASDF, which has no real warfare experience since its establishment after World War II.&#8221;

Mark Rankin contributed to this report.