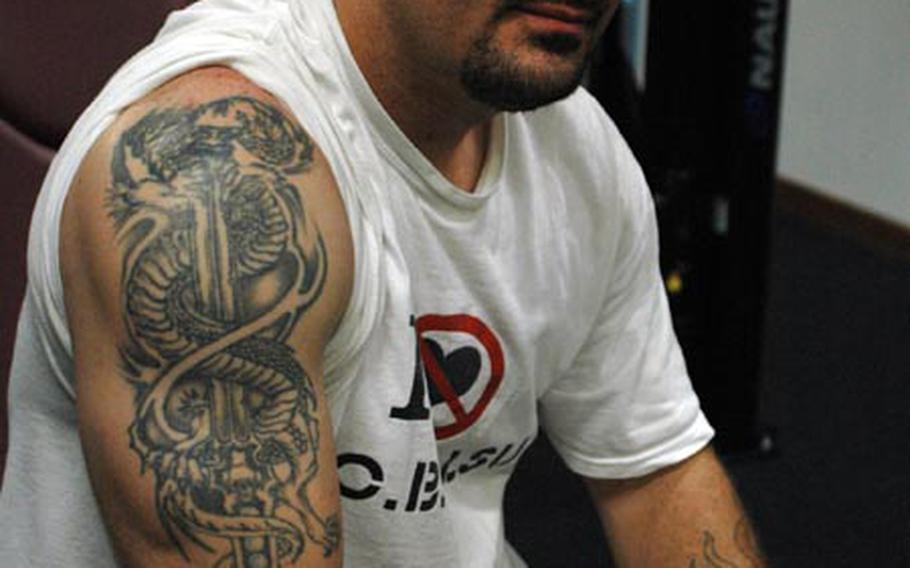 Tim Coblentz shows off some of his tattoos that he will have to cover up while visiting a Japanese water park. Coblentz said that he isn&#39;t a fan of the park rules but will still go even though he has to wear a long-sleeve shirt. (Bryce S. Dubee / S&S)

Tim Coblentz shows off some of his tattoos that he will have to cover up while visiting a Japanese water park. Coblentz said that he isn&#39;t a fan of the park rules but will still go even though he has to wear a long-sleeve shirt. (Bryce S. Dubee / S&S) 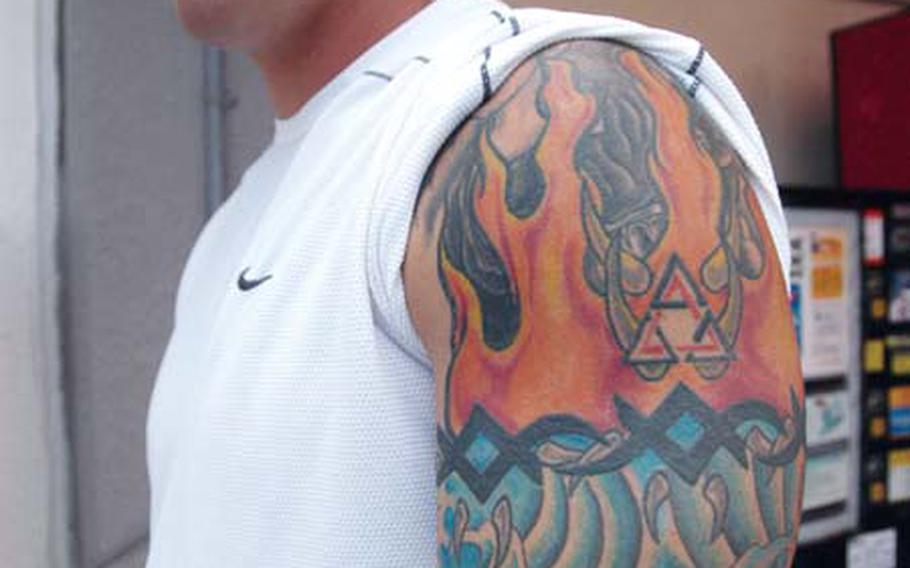 YOKOTA AIR BASE, Japan &#8212; As the temperature rises, thousands of people throughout Japan are heading to local water parks seeking relief from the summer heat.

That&#8217;s exactly what 374th Force Support Squadron employee Tim Coblentz and his family will be doing this weekend as they venture to Tokyo Summerland to cool off, just like they did several times last year. However, instead of wearing swimming trunks and sunscreen, Coblentz will be in a long-sleeve shirt and long shorts in an attempt to hide his tattoos. That&#8217;s because Tokyo Summerland recently began barring entrance to anyone with tattoos.

"As a general rule, people affiliated with mobsters or criminal organizations are not allowed to enter the premises," Tokyo Summerland&#8217;s Web site states. "The same applies to people wearing tattoos."

Of the five facilities questioned by Stars and Stripes, only one place &#8212; Tobu Zoo Park &#8212; accepts those with tattoos, but only when guests cover them. The others &#8212; Yomiuri Land, Seibu-yuenchi Amusement Park, Fuji-Q Highland and Tokyo Summerland &#8212; said they restrict visitors with tattoos, regardless of their size or location.

Other parks, including Toshimaen Pool and LaQua, state on their Web sites that people with tattoos are not permitted. Similar rules apply at many onsens and public bath houses throughout Japan.

In Japan, the general public associates tattoos with organized crime, explained Naoteru Yamaguchi, chief of the administrative office for the Tobu Zoo Park.

Members of organized crime syndicates in Japan, called yakuza, are known for their extensive tattoos.

People who see tattoos are intimidated, and young children are scared, Yamaguchi said, which is why in the past the park restricted people with ink from entering.

But now, as more people have been getting them as a fashion statement, the park adjusted its rules.

"It is only this year we began to open our facilities to guests with tattoos," Yamaguchi said. "It is hard for us already to restrict all of them. That&#8217;s why we decided to ask them to cover them up instead refusing them."

At Yokota, the base travel office is required to inform customers of a water park&#8217;s tattoo policy, explained base spokesman Capt. Chris Watt, who said rules are also printed on park posters hung on the base.

With 10 tattoos &#8212; mostly religious and familial in nature &#8212; and three tours in Japan, Gunnery Sgt. Tony Smith says he&#8217;s well aware of the country&#8217;s tattoo "taboo." Once, he and his fellow tattooed Marines were not included in a water-bound excursion with Japanese forces during a joint exercise.

"It&#8217;s hard not to feel discriminated against, at least a little," said Smith, who has the Bible&#8217;s 23rd Psalm on his back. "We try to be sensitive to Japanese culture and don&#8217;t stick our chopsticks in the rice, but they aren&#8217;t sensitive to our culture where tattoos are accepted."

Joseph Kumzak, the Morale, Welfare and Recreation sports director at Torii Station&#8217;s gym on Okinawa, said during a recent visit to Gold&#8217;s Gym in Tokyo, he and his wife, Zoa, were asked to cover up their tattoos with tape if they planned on working out.

Zoa has two visible tribal bands on her arms, and the couple has each other&#8217;s initials tatted on their wedding fingers.

The couple asked the gym for their money back, arguing that trying to lift weights with tape around their arms was difficult.

Kumzak said he hasn&#8217;t had such encounters on Okinawa and thinks the island may be more lax on the rule for economic reasons. Turning away potential customers for having skin art is bad for business, he said.

Chrystal Williams, a lead recreation assistant who works alongside Kumzak at Torii&#8217;s gym, said she&#8217;s resisted her desire to get kanji characters on her upper back for fear of being turned away at the local bath houses she frequents monthly.

Patrons with tattoos are not permitted.

Army Staff Sgt. Derek Zahler of the 1st Battalion, 1st Special Forces Group, said the first time he visited an Okinawan bath house, he never made it past the counter.

"I walked in there and got the really weird eyeball," said Zahler, who has a colorful display of Japanese and American symbols inked on his left shoulder.

His wife, Lentine, said she&#8217;s had more luck being discreet about her small fish tattoo on her hip &#8212; strategically placing her arm to cover it.

"The first time I went in (a bath house) I was really cautious about it," she said.

As for Coblentz, he said he&#8217;s disappointed by the water park&#8217;s rule change, adding that his wife, who also has tattoos, will also have to cover up during their trip.