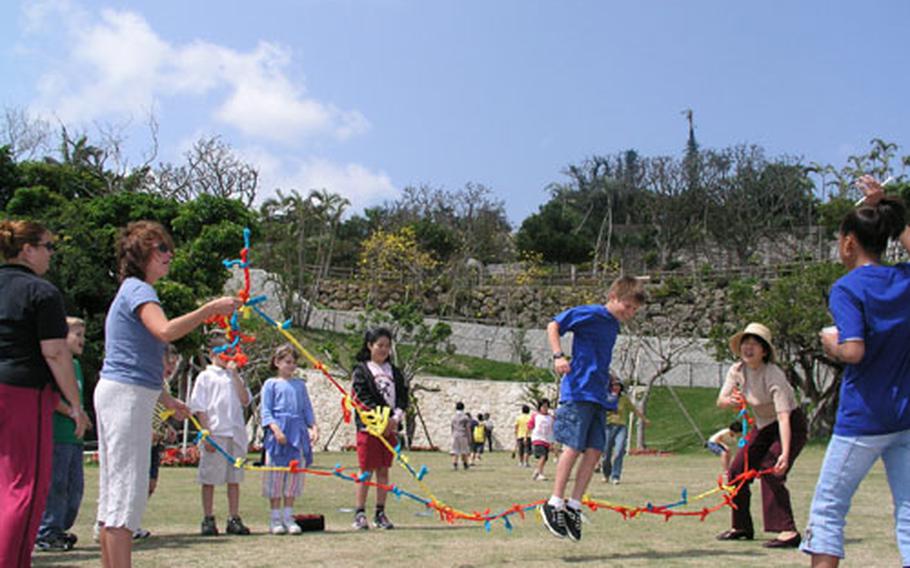 During a recent visit to the Okinawa Zoo, third graders from Kadena Elementary School and Shimabukuro Elementary School in Okinawa City enjoyed traditional Japanese games together and shared in the wonder of nature. (Chiyomi Sumida / S&S) Students from Kadena Elementary School recently participated in an exchange event at the Okinawa Zoo with students their age from Shimabukuro Elementary School in Okinawa City. Before saying good-bye to each other after three hours of fun time, Christopher Dozier thanked the staff and volunteers of the zoo utilizing his Japanese language ability. (Chiyomi Sumida / S&S) 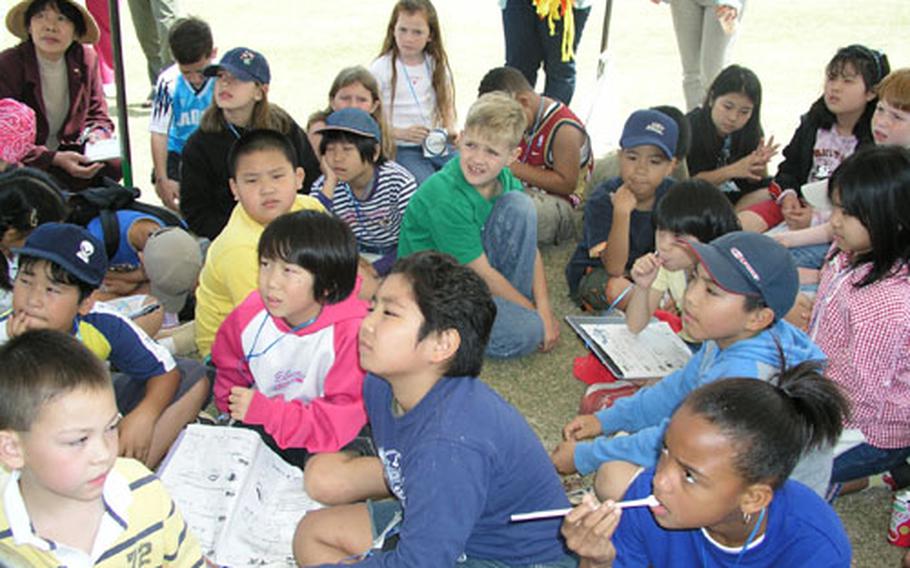 Third graders from Kadena Elementary School participated in a cultural exchange event recently at the Okinawa Zoo. Their counterparts were from Shimabukuro Elementary School in Okinawa City near the air base. (Chiyomi Sumida / S&S)

OKINAWA CITY, Okinawa &#8212; A recent visit to a local zoo provided a firsthand cultural experience for some third-graders at Kadena Elementary School.

Together with their counterparts from Shimabukuro Elementary School in Okinawa City, they met at the Okinawa Zoo to play games, explore and share in the fun.

Although their words sounded different, they shared the same wonder at the sight of 7-foot, wiggly, venomous Habu snakes, indigenous to the Ryukyu Islands.

Seventeen students from Kadena joined an exchange event last month with about the same number from the local school.

Together with his classmates, he ran toward one of the ponds. A group of Japanese students followed. Over the fence, they gazed at numerous shiny black turtles &#8212; big and small &#8212; basking in the sun.

Before checking out the zoo, the students played a few games, including Jyanken (rock-paper-scissors) in the zoo&#8217;s park area.

The traditional Japanese children&#8217;s game wasn&#8217;t new to the American students, said their math teacher, Eileen Janiga. As a part of emergent learning, they learn math completely in Japanese, at least 30 minutes a day.

&#8220;In many math problems, culture is inside,&#8221; said Janiga, who&#8217;s employed emergent teaching techniques for 11 years. For instance, spinning a top or cicada catching are always seen in Japanese math problems. Learning such cultural differences while studying math is a great advantage for children, she added.

The zoo visit was also an adventurous experience for the Japanese students.

She wanted to interact more with the Americans and become friends with them. But she didn&#8217;t have enough courage to do that, she confided with some regret.

Yet she proudly showed off a card with several English names on it. They were signatures she&#8217;d collected from American friends during a game they played earlier.

Before concluding the three- hour visit, the students gathered once again. Christopher Dozier thanked the staff and volunteers of the zoo and said goodbye to his Japanese friends, utilizing his ability in the language.

Tomoki Makabe, speaking for his classmates, replied in Japanese that the outing was very enjoyable.