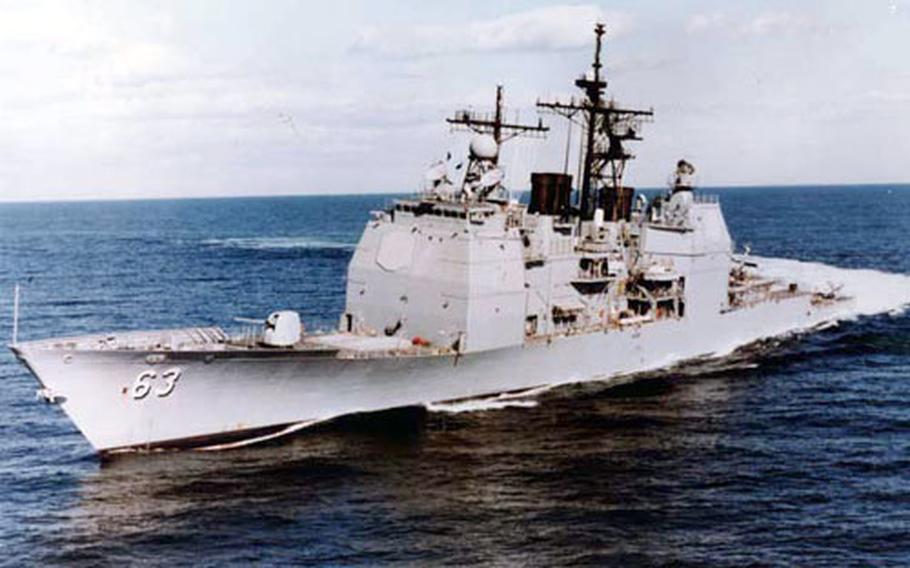 YOKOSUKA NAVAL BASE, Japan &#8212; Osaka, Japan, officials say they will ask the U.S. Navy to cancel a proposed port visit later this month by the USS Cowpens, a Yokosuka-based Aegis guided-missile cruiser.

While one Japanese official said the request will be made because of fears the visit would make Osaka a target for terrorism, others cited a long-standing resistance to any warships visiting the port about 300 miles west of Tokyo.

Yukio Yamada, with the Osaka Port and Harbor Bureau, said a 1994 city declaration specified the port be used &#8220;only for peaceful purposes.&#8221; Yamada said Osaka has received a preliminary notification of the visit but not a formal request.

If, and when, the U.S. Consulate makes a formal request, Yamada said, Osaka officials plan to say no.

The Japan Times quoted an unnamed Osaka official as saying, &#8220;The recent attack in Saudi Arabia, plus the anger many Osaka residents feel toward the United States for the war on Iraq, is still fresh.&#8221;

Navy officials declined Monday to comment on the report or whether the port visit is planned, citing a policy against discussing future ships and troop movements.

Cmdr. Dave Wells, spokesman for Commander, Naval Forces Japan, said: &#8220;The scourge of terrorism is an international concern. While we are not expecting any specific threats in Japan, we work very closely with our security counterparts here in Japan and take every necessary precaution to ensure U.S. Navy port visits here are safe. &#8230; Through ship visits to ports in Japan, our alliance with Japan is enhanced.&#8221;

Osaka officials said that since 1994, U.S. Navy ships sporadically have visited the port. In April 2002, the USS Blue Ridge went ahead with an Osaka visit after a similar official request from the port authority to not enter the harbor.

According to Japanese officials, the tension over U.S. ship visits is related to a 1975 demand from Kobe port officials that requires all foreign naval vessels entering the harbor to declare whether they are carrying nuclear weapons.

Those same officials say the U.S. Navy never has complied with that request.

The Cowpens neither is powered by a nuclear reactor nor, usually, carries nuclear weapons, Yamada acknowledged. He stressed that similar requests have been made to JMSDF ships entering Osaka harbor.

Hiroshi Chida contributed to this report.