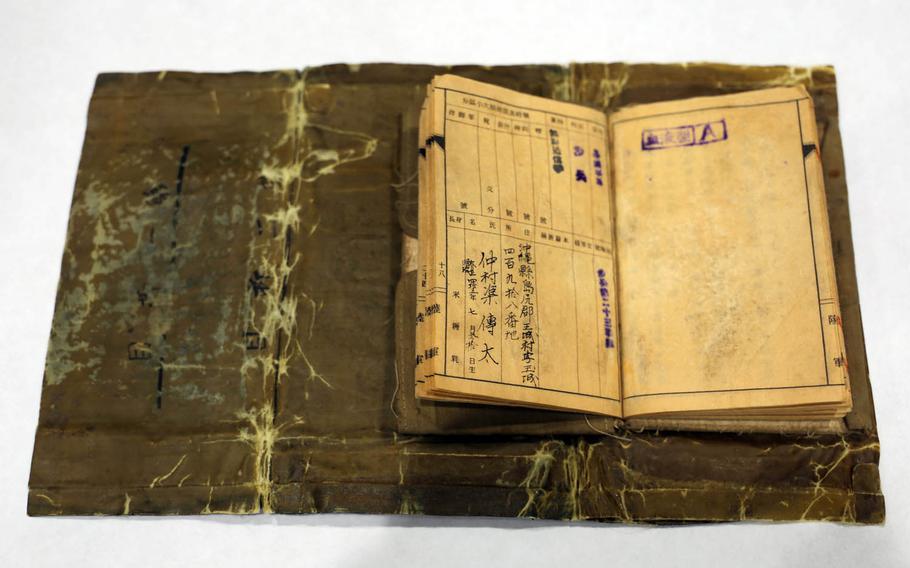 An Imperial Japanese Army soldier's identification notebook, missing for 72 years, was returned to his family on Okinawa, Tuesday, June 20, 2017. The owner of the notebook, Lance Cpl. Denta Nakandakari, died in the Battle of Okinawa. (Chiyomi Sumida/Stars and Stripes)

An Imperial Japanese Army soldier's identification notebook, missing for 72 years, was returned to his family on Okinawa, Tuesday, June 20, 2017. The owner of the notebook, Lance Cpl. Denta Nakandakari, died in the Battle of Okinawa. (Chiyomi Sumida/Stars and Stripes) 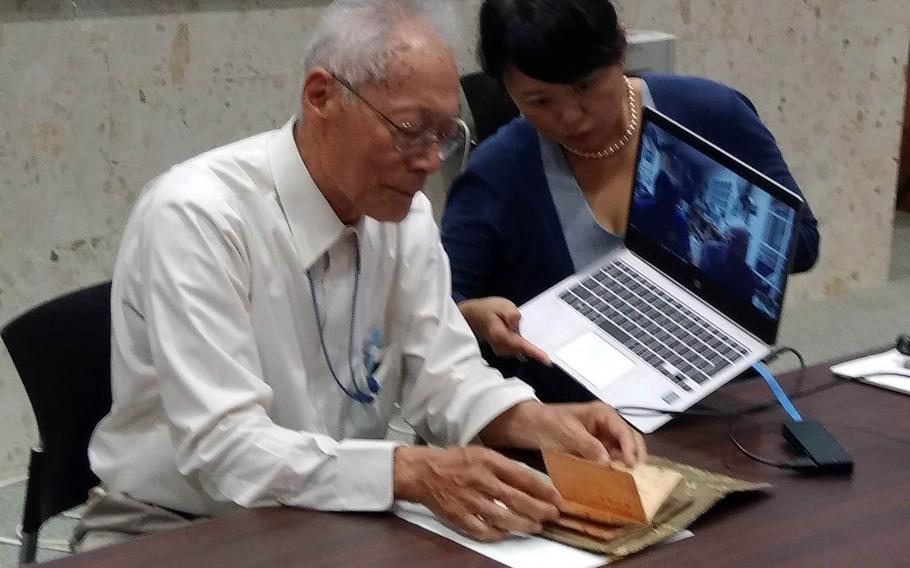 Densuke Nakamura, examines the military identification notebook of his uncle, Denta Nakandakari, who died in the Battle of Okinawa 72 years ago, as Okinawa journalist Chizu Inoue assists with a Skype conversation, Tuesday, June 20, 2017. (Chiyomi Sumida/Stars and Stripes) 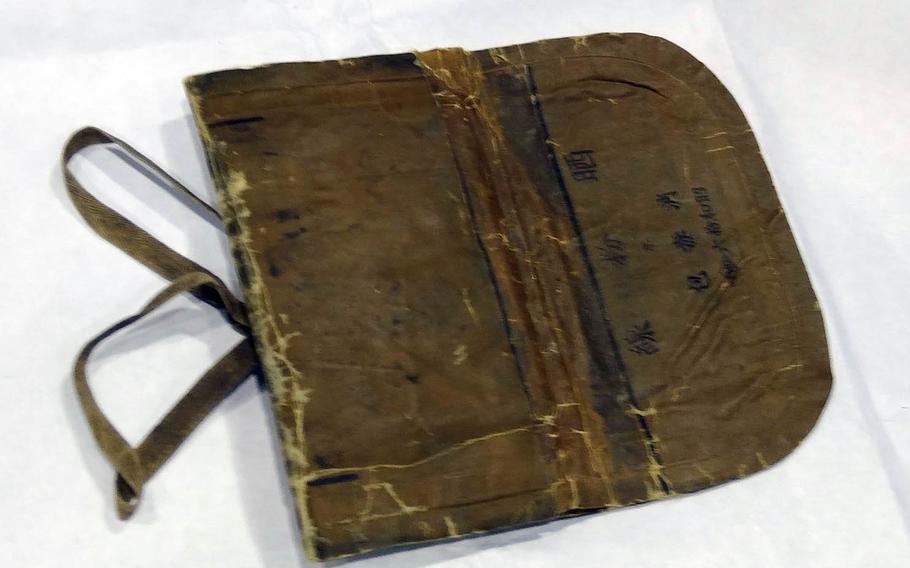 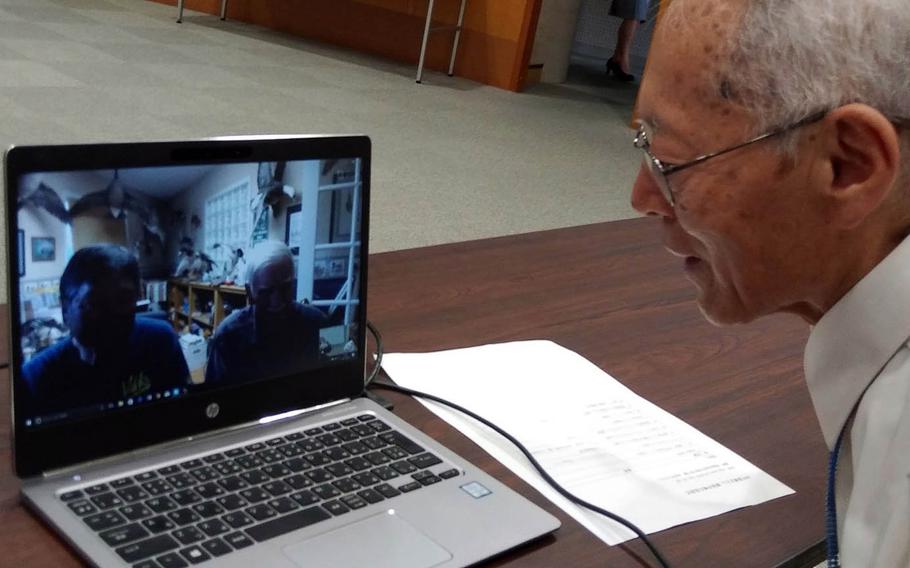 Densuke Nakamura, expresses his gratitude during a Skype conversation with Brian Yamamoto, left, and Robert Franz, after his uncle's World War II-era military identification notebook was returned to Okinawa. (Chiyomi Sumida/Stars and Stripes)

NANJO, Okinawa — As Okinawans marked the 72nd anniversary of the end of the Battle of Okinawa, a war artifact belonging to a Japanese soldier killed in the bloody conflict was returned to his family after more than seven decades.

“I am a nephew of Lance Cpl. Denta Nakandakari. It is a miracle that my uncle’s ID notebook came home 72 years after the war,” Densuke Nakamura, 78, of Nanjo City, said Tuesday during a Skype conversation with two men in Alaska. “All of my family is rejoiced.”

The notebook had been kept at the home of one of the men on the call — 91-year-old World War II veteran Robert Franz.

“I am so glad it has found its rightful place,” Franz said as he looked at Nakamura on a computer screen.

Franz, who served in the Navy and fought at Leyte Gulf — one of the war’s largest naval battles — said he was handed the notebook in 1964 by a WWII veteran friend who fought in Europe. That friend told Franz he got the notebook from another veteran who fought on Okinawa.

“They did not know what to do with it,” said Franz, who didn’t know either.

So the war artifact spent the next 53 years in Franz’ dresser drawer.

Earlier this year, he decided to bring it to his dentist, Brian Yamamoto, 63, a third-generation Japanese American whose father trained at the Military Intelligence Service Language School at Fort Snelling, Minn., and later served at the Army’s Camp Zama near Tokyo.

Although Yamamoto could not read Japanese, he found that the notebook’s owner was an Okinawan. He relayed that discovery to his friend, Chizu Inoue, assistant editor in chief of Momoto, a quarterly Okinawan culture magazine.

Inoue found that the notebook’s owner was Denta Nakandakari, who was born in 1912 as the first son of the Nakandakari family of Tamagusuku village, known today as Nanjo City. The notebook said he had been conscripted into the Imperial Japanese Army in 1938 and served in China. He was discharged in 1944 but was conscripted again into the Okinawa Defense Corps.

“I thought there would be no chance, but finding the family is so special,” Yamamoto said.

Nakamura, whose family name was changed from Nakandakari, was impressed that the nearly 80-year-old notebook was in such a great condition.

He remembered his well-built Uncle Denta, a former schoolteacher who loved children and enjoyed sumo wrestling.

The Battle of Okinawa began with attacks on the Kerama Islands by U.S. forces on March 26, 1945, and ended in June 23, 1945. Also known as the “Typhoon of Steel,” the battle claimed more than 200,000 lives among military and civilians.

“We didn’t know where and how our uncle died,” said Nakamura, who added that it was only about 10 years ago that he learned he was killed by bombing while taking shelter with his comrades in a large tomb in Urasoe. He was 33.

“Had we known that much earlier, we could have recovered his remains,” he said, holding the notebook dearly in both hands.

His sorrow was shared by Franz.

The notebook helped fill a page of history in the Nakamura family that had been wiped out by the war.

Nakamura looks forward to obon, a Japanese traditional summer family reunion event that pays respect to ancestors. At that time, he will tell everyone about the notebook.

“The notebook, photos of both of you and today’s event will be passed down to the next generation and will be long remembered in my family,” he told Franz.