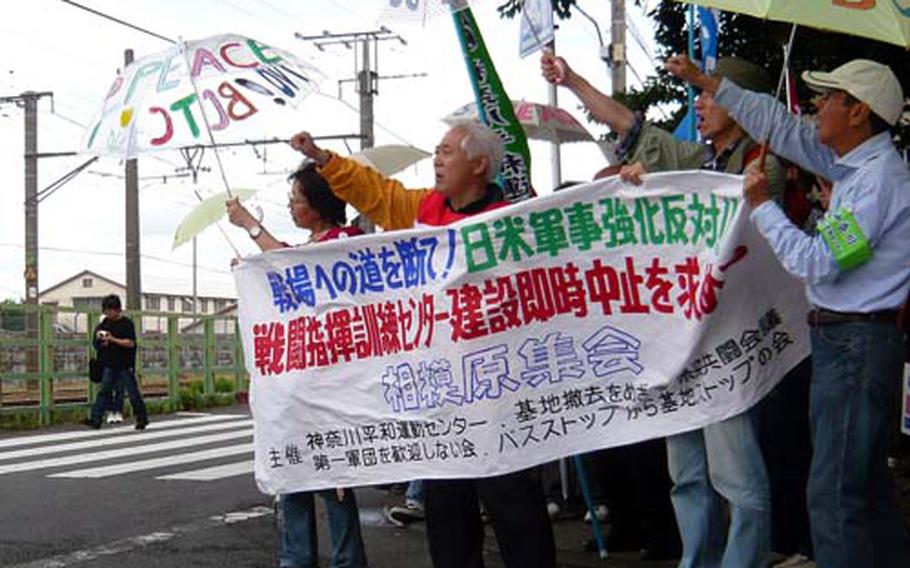 Police guarded protesters from going near the depot after the protesters spread onto the road that runs in front of the depot. (Hana Kusumoto/ S&S)

Those who gathered said they are against the construction because they believe the training center will be used to gear up Japan&#8217;s Ground Self-Defense Force for war.

&#8220;Self-Defense Forces are integrated into the military strategy of the United States,&#8221; said Tatsumi Hibana, deputy leader of one of the peace groups that organized the protest.

Japan&#8217;s pacifist constitution allows its military to only defend its country or engage in humanitarian missions.

However, U.S. Army and Japanese officials dispute that claim.

&#8220;It&#8217;s our job to be prepared for any contingency,&#8221; Crawford said, adding that the center can be used for a variety of training simulations ranging from humanitarian relief, disaster response and the defense of Japan.

Despite USARJ&#8217;s stated position, Hibana maintained that the training center will be used to train Japanese forces.

Tied via computer connections into a central training system located in the States, the center will allow USARJ soldiers to train for a variety of missions in one permanent location, Crawford said.

The center will have a dedicated staff and a dramatically lower impact on the environment because soldiers will not have to move to a location, set up a temporary training site and then tear it down once the exercise is complete he said.

Some also expressed concerns that the depot&#8217;s increased role will cause unwanted attention to the community.

Crawford said the protesters have a right to voice their opposition and USARJ has nothing to hide.