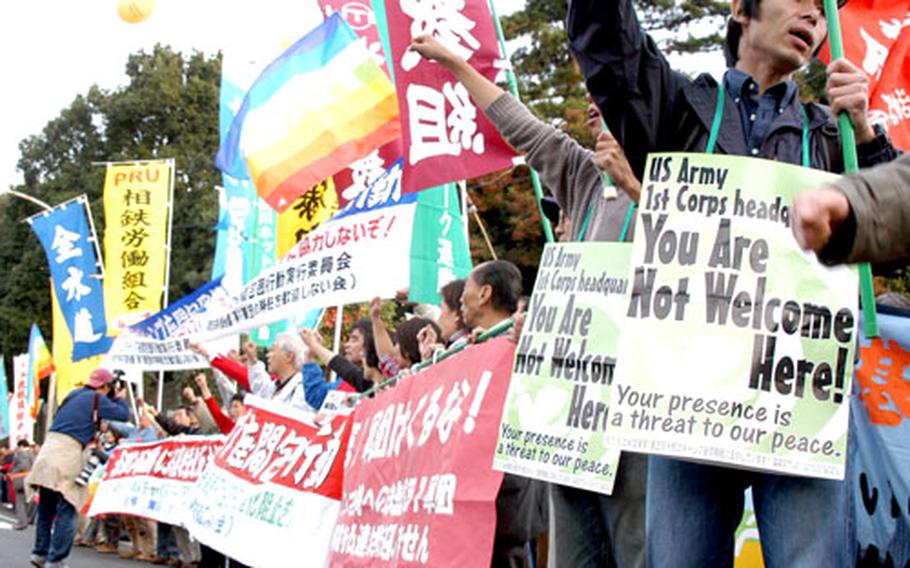 Protesters shout their opposition to an increase of troops at Camp Zama, Japan, on Saturday in front of the base’s main gate. (Hana Kusumoto / S&S)

Protesters shout their opposition to an increase of troops at Camp Zama, Japan, on Saturday in front of the base’s main gate. (Hana Kusumoto / S&S) 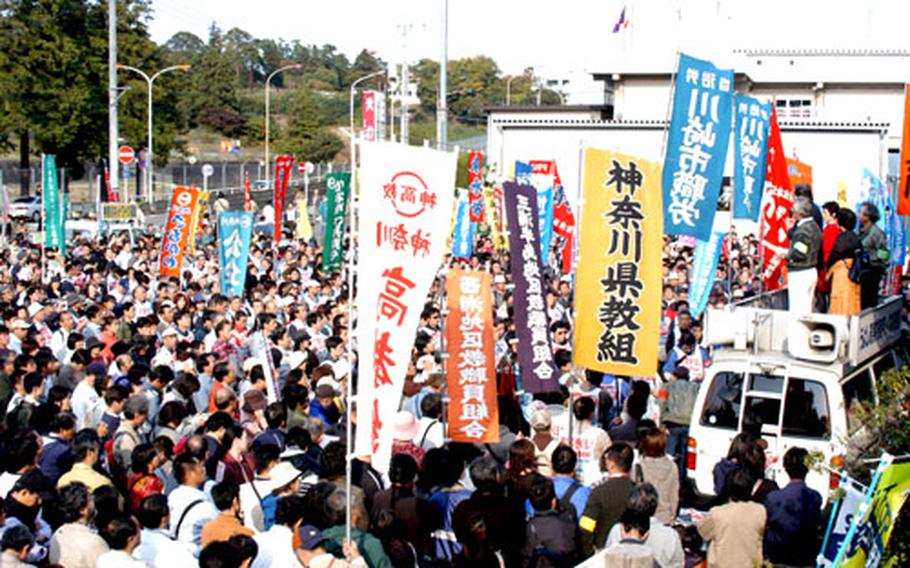 Protesters gather at Camp Zama’s front gate Sunday to shout their opposition to any increase of troops at the base on mainland Japan. Organizers said the rally was planned to coincide with the announcement of the interim report on realigning U.S. forces in Japan. (Hana Kusumoto / S&S)

ZAMA, Japan &#8212; Protesters opposed to a troop increase at Camp Zama formed a human chain around the fence of the headquarters side of Camp Zama on Sunday.

Organizers said more than 3,200 people &#8212; Japanese labor union and citizen&#8217;s group members as well as local residents &#8212; gathered Sunday. Izumi Kato, secretary general of the protest organizers, said the rally was planned to coincide with the announcement of the interim report on realigning U.S. forces in Japan.

The report, announced two weeks ago, stated that U.S. Army Japan&#8217;s command structure would be altered to make it deployable and adaptable to joint-task force needs. It also stated that a Japan Ground Self-Defense Force Central Readiness Force Command headquarters would be located at Camp Zama.

Many protesters said they were concerned that a stateside Army headquarters will be relocated to Zama. Although it wasn&#8217;t specified in the report, city mayors outside of Camp Zama said government officials told them additional American troops will be deployed to Zama.

&#8220;I came because the interim report suggests that Japan will become the front line of the future U.S. military operations,&#8221; said a 31-year-old man from Osaka, who refused to be named. He said he participates in anti-base protests throughout the country, including a similar protest held here last February.

&#8220;It is better to have more people than less,&#8221; said Tetsu Nomura, a resident of Yamato city who came to support the protest. Yamato city hosts Naval Air Facility Atsugi.

Nomura said he believes the interim report means a build up of Camp Zama, which he opposes because he wants a country without military bases.

Army officials said no incidents were reported Sunday and they appreciated how peaceful the protest was.

&#8220;We appreciate their willingness to make their opinions known without disrupting the operation of the post. It is that spirit of cooperation that makes the Japanese such good allies,&#8221; said Maj. Martha Brooks, a U.S. Army Japan spokeswoman, in a written statement.

She said the Army understands the frustrations of the local citizens; however, the decisions made are &#8220;designed to help promote the stability of the Pacific region and the security of all the citizens of Japan.&#8221;

She added: &#8220;We trust that the government of Japan will eventually be able to convey to the locals how important the suggestions and decisions in the interim report are to the security of Japan and the region.&#8221;