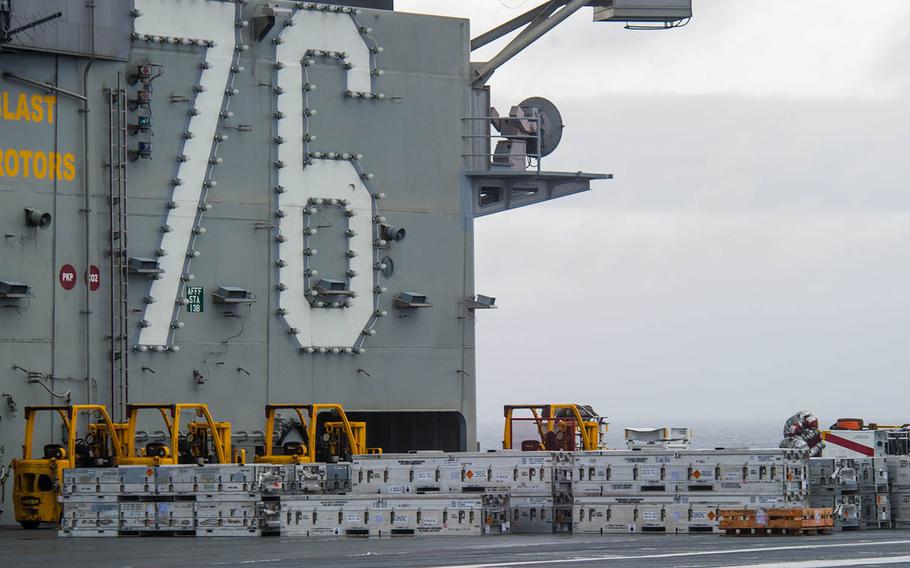 The aircraft carrier USS Ronald Reagan takes part in a replenishment at sea in waters south of Japan, May 14, 2018. (Kenneth Abbate/U.S. Navy)

YOKOSUKA NAVAL BASE, Japan — A USS Ronald Reagan sailor will not be prosecuted in Japanese court after he was accused of smuggling illegal drugs into the country earlier this year.

Kanagawa Prefectural Police submitted documents to the office last month recommending that he be prosecuted for violating Japan’s Narcotics and Psychotropics Control Law, but he was never charged.

The sailor was accused of sending narcotics through international mail from Canada after Yokohama Customs found about 18 grams of synthetic drugs in a package addressed to his off-base apartment, Japan’s Kyodo News and Asahi newspaper reported last month.

The sailor remained silent throughout police questioning and denied his involvement in the crime, the reports said. He was never taken into custody, but the Navy restricted him from leaving Yokosuka Naval Base.

A Yokosuka prosecutor’s office spokeswoman declined to say why the case was dropped.

The Navy started its own investigation when Japanese police began to consider the case in February. The allegation was connected to a separate probe regarding a possible drug ring involving at least 12 Yokosuka-based sailors suspected of buying, selling and using drugs such as LSD and ecstasy.

The Navy is continuing to investigate the case, according to Yokosuka spokesman Jim O’Donnell.

The sailor’s name was not released because he was not charged.