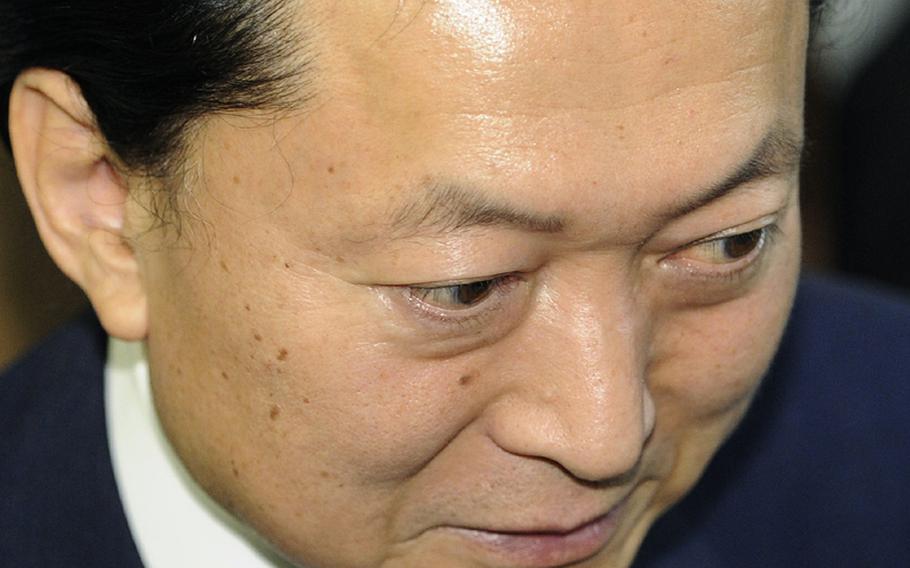 Japan's Prime Minister Yukio Hatoyama is pictured after the Joint Plenary Meeting of the Diet on June 2. Hatoyama said Wednesday he was resigning over his broken campaign promise to move a U.S. Marine base off the southern island of Okinawa. (Kyodo News/AP)

GINOWAN, Okinawa &mdash; Japanese Prime Minister Yukio Hatoyama resigned Wednesday after a turbulent eight months in office, admitting his broken campaign promise to move U.S. Marine air units off Okinawa had taken a toll on his credibility as a leader.

His decision came just four days after the U.S. and Japan announced they would go forward with a 2006 plan to close Marine Corps Air Station Futenma in urban Ginowan and relocate aviation operations to Camp Schwab, on Okinawa&rsquo;s more rural northeast coast.

In anticipation of Hatoyama&rsquo;s resignation, a spokesman for the Pentagon said Tuesday that the U.S. expects the agreement to go ahead, moving Marine air units to Camp Schwab as planned.

&ldquo;This is an agreement between governments, not between politicians,&rdquo; Pentagon press secretary Geoff Morrell said. &ldquo;We expect agreements to be respected &hellip; that whoever is in power will respect the agreements that have been forged by previous administrations.&rdquo;

Hatoyama&rsquo;s Democratic Party of Japan on Friday is to pick a new leader, who would become prime minister because of the DPJ&rsquo;s majority in the Diet, party members said. Finance Minister Naoto Kan, 63, who is also deputy prime minister, is viewed as the front-runner.

Hatoyama said another factor in his resignation was a series of funding scandals involving himself and the DPJ secretary general, Ichiro Ozawa, who also stepped down Wednesday.

Ozawa told reporters following the prime minister&rsquo;s announcement that a new cabinet would be chosen quickly, possibly by Monday.

&ldquo;We can&rsquo;t create a political vacuum,&rdquo; said Ozawa, who was considered the party&rsquo;s power broker. &ldquo;We have to decide on the next leader as soon as possible.&rdquo;

Hatoyama, 63, is the fourth Japanese prime minister to resign in the past four years.

He called it quits after facing mounting pressure from his own party, the desertion of one of his government&rsquo;s coalition partners and plummeting poll numbers &mdash; all largely attributed to his failure to keep a promise to relocate Futenma off Okinawa.

&ldquo;I have caused trouble and concern to the people of Okinawa,&rdquo; Hatoyama said during a televised meeting with party members Wednesday morning. &ldquo;However, I want the people to understand I made every effort to move the [Futenma] operations out of Okinawa.&rdquo;

He said the March 26 sinking of a South Korean warship, blamed on a North Korean submarine, was a factor in his decision to endorse the 2006 plan. U.S. officials, taken aback when Hatoyama took power and immediately called for a full review of the plan, insisted throughout that keeping Marine air and ground units in close proximity was necessary to quickly respond to regional emergencies.

&ldquo;To maintain and keep the trusted relations between the U.S. and Japan is indispensable and critical not only for Japan but for the stability of the East Asia region,&rdquo; Hatoyama said. &ldquo;It is unfortunate that we ended up asking Okinawa to continue to shoulder the burden.&rdquo;

Hatoyama also said he regretted the decision of the Social Democratic Party to leave the three-party coalition after he removed SDP leader Mizuho Fukushima from the Cabinet after she refused to sign on to his decision on Futenma.

In Naha, Okinawa&rsquo;s capital, Fukushima told reporters on Wednesday that her party will continue to oppose relocating Futenma within Okinawa and will not return to the ruling coalition unless the DPJ reverses its position.

&ldquo;The people had high expectations based on the public promise of the DPJ and the words of Prime Minister Hatoyama,&rdquo; Nakaima said. &ldquo;This all makes me wonder if the prime minister had an accurate understanding of situation on Okinawa.&rdquo;

The political climate on Okinawa and between the U.S. and Japan is going to be difficult for whoever succeeds Hatoyama, said an Okinawa-based expert on foreign affairs.

&ldquo;In the long run, the way the Futenma issue was handled has undermined trust between the two nations,&rdquo; said Masaaki Gabe, professor of international relations at the University of the Ryukyus. &ldquo;Because the major reason for Hatoyama stepping down was Futenma, it sends a message to the Japanese public that a prime minister who cannot maintain good relations with the U.S. government cannot keep his position.

&ldquo;The Futenma agreement was not a win-win situation. Instead, it was totally one-sided, developing a sense of defeat among the Japanese public. Whoever the next prime minister may be, he or she would consider it too risky to change anything.&rdquo;

Hatoyama&rsquo;s resignation is being seen as an attempt to bolster his party&rsquo;s chances in the upcoming July elections for the Upper House of the Diet. Support for the DPJ has plummeted from a more than 70 percent favorable rating in September to less than 20 percent, according to a recent poll.

Hatoyama came to power last September, ending an almost unbroken 50-year rule by the conservative Liberal Democratic Party, which had strongly supported the U.S. alliance. He maintained during his tenure a need for Japan to wean itself from reliance on the U.S.

He touched upon that again in his resignation announcement.

&ldquo;For the future, we have to make sure Japan&rsquo;s security is maintained by Japan itself, and we should not continue to rely on the United States,&rdquo; he said. &ldquo;The true nature of the Futenma issue lies here. It is probably not possible in my lifetime, but perhaps for the next generation.&rdquo;

A senior defense official at the Pentagon told reporters Tuesday that there should be no delay in building the replacement facility, which is expected to be completed in 2014.Details are expected to be worked out by the end of August, officials said.