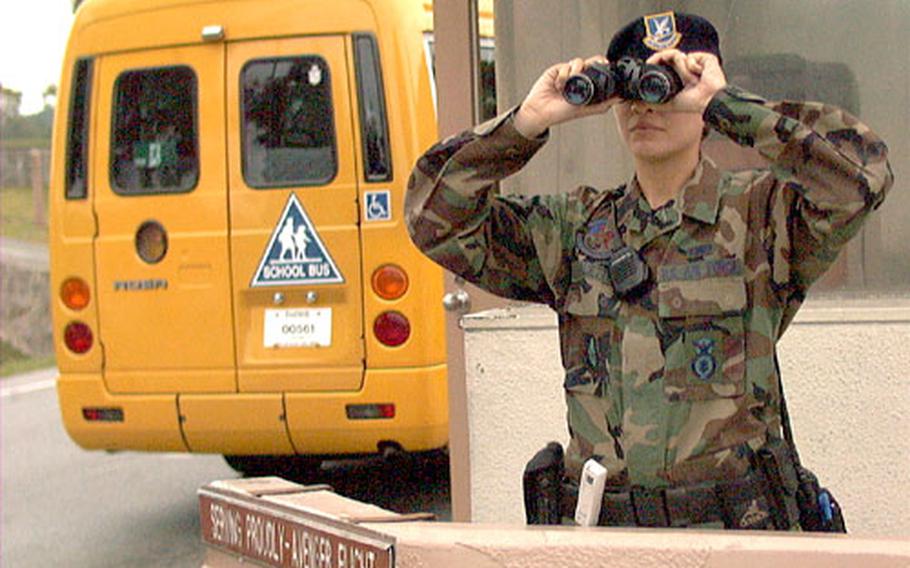 NAHA, Okinawa &#8212; Japanese police are planning to increase security around U.S. military bases, even though the bases have not heightened force protection in response to the Iraqi war.

As anti-war protests continue throughout Japan, the National Police Agency is drafting a plan to boost patrols around the bases, just in case the protests spark terrorist actions, such as the March 12 firing of two projectiles from homemade pipe mortars at Yokota Air Base, Japan.

But don&#8217;t expect to see a Japanese police bus crammed with riot police parked near an Okinawa base gate. Instead, most of the extra police will patrol the bases&#8217; outer perimeters. At most, some bases will have one or two police officers on a foot patrol near the gate, a police spokesman said.

The thought of extra police posted around the U.S. bases that cover one-fifth of the island has upset Okinawa officials. Okinawa Prefectural Assembly members objected to reports Friday that the prefecture&#8217;s Public Safety Committee asked the National Police to send riot police to Okinawa and established a &#8220;security patrol countermeasures&#8221; headquarters

Hideto Ueda, chief of Okinawa&#8217;s Police Administration Department, told the assembly Thursday the patrols&#8217; impact would be &#8220;minimal,&#8221; but the lawmakers said they hoped an increased police presence in Okinawa wouldn&#8217;t dissuade tourists.

&#8220;We hope that the police will pay maximum consideration, so that no groundless rumors like last time would be spread again,&#8221; said Kokichi Iramina, chairman of the Okinawa Prefectural Assembly.

&#8220;But that does not mean that we are saying that there is no need for security patrols,&#8221; he said. &#8220;The primary importance is to secure safety of people of Okinawa. We would not do anything to hinder the efforts by the police to maintain the safety of the community. All we hope is that war is over as soon as possible.&#8221;

This time, the reinforcements&#8217; arrival will be more low-key than just after Sept. 11, 2001. Then, the police reinforcements were dispatched by Self Defense Force planes, contributing to the impression that Okinawa was, perhaps, a prime terrorist target, a senior Okinawa police official said Monday.

Several assembly members said security around bases just after the Sept. 11 attacks was excessive and hurt tourism. Ueda replied that the additional police presence now would be hard to notice; no police troops would stand guard at the base gates.

&#8220;There are many other important facilities such as the airport and lifeline infrastructure spread throughout the island,&#8221; he said. &#8220;Terrorist activities have changed. An example of this is the bombing of a disco club in Indonesia, that shows that terrorists attack places where many people gather &#8230; so just heightening the patrols around military installations would not necessarily be good enough.

Security patrols by Okinawa-based officers already have been increased, the official said.

&#8220;Since Thursday, we have assigned 600 police troops to patrol around major facilities throughout the prefecture,&#8221; he said.

He would not divulge the exact date for the arrival of police from the mainland.

On the Japanese main islands, the National Police Agency stepped up security at 650 key facilities, including 70 U.S. bases and 1,870 embassies. Police units armed with submachine guns were posted at nuclear power plants and other strategic utilities.