Japanese PM thanks U.S. troops during visit to devastated region 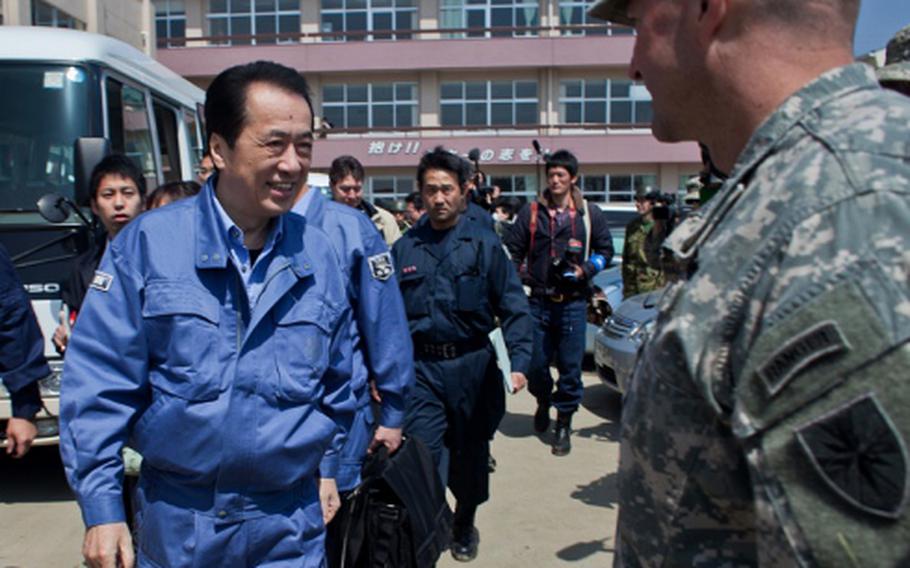 Buy Photo
Japan Prime Minister Naoto Kan approaches Army Col. Lance Koenig, commander of Joint Logistics Task Force 10, during his visit to Ishinomaki Commercial High School shelter in Ishinomaki, Japan. Soldiers and Marines from the task force have been working to clean up the school grounds and were thanked by Kan for their efforts. (Nathan A. Bailey/Stars and Stripes)

Kan arrived in a motorcade with a large group of other Japanese dignitaries to check on the work of 36 U.S. soldiers and four Marines working alongside Japan Self-Defense Force personnel at Ishinomaki Commercial High School. He found the U.S. and Japanese troops hard at work using shovels, Bobcat mini bulldozers and a bucket loader brought by the Americans to remove the mud dumped by the tsunami on the school&rsquo;s sports fields.

&ldquo;The U.S. military is working alongside the Japanese Self-Defense Force,&rdquo; Kan told a group of Japanese reporters. &ldquo;I&rsquo;m happy to see that happen here at this high school.&rdquo;

The prime minister shook hands with several U.S. troops and thanked them, in English, for their efforts. One of the men he met, Command Sgt. Maj. Robert Austin, 45, is from New Orleans, a city still recovering from Hurricane Katrina.

Austin, who is the top enlisted soldier in the Okinawa-based 10th Support Group, said he was stationed in Germany when Katrina struck. When he returned to New Orleans to check on family, he found their home damaged in the disaster that wiped out a large part of the city.

&ldquo;My mom left town but my sister, a police officer, stayed through it all,&rdquo; he said, adding that the people in northern Japan share a &ldquo;can do&rdquo; attitude with residents of New Orleans.

&ldquo;The devastation here is just tremendous but the people have great energy,&rdquo; he said. &ldquo;They are motivated to get things cleaned up as fast as they can and get life back to normal. It is exactly the same attitude in New Orleans.&rdquo;

On a recent trip home, Austin said he saw visible progress in the massive job of cleaning up the New Orleans.

&ldquo;It is a lot better but there is still a lot of work to be done,&rdquo; he said. &ldquo;It will take years to recover there as well as here.&rdquo;