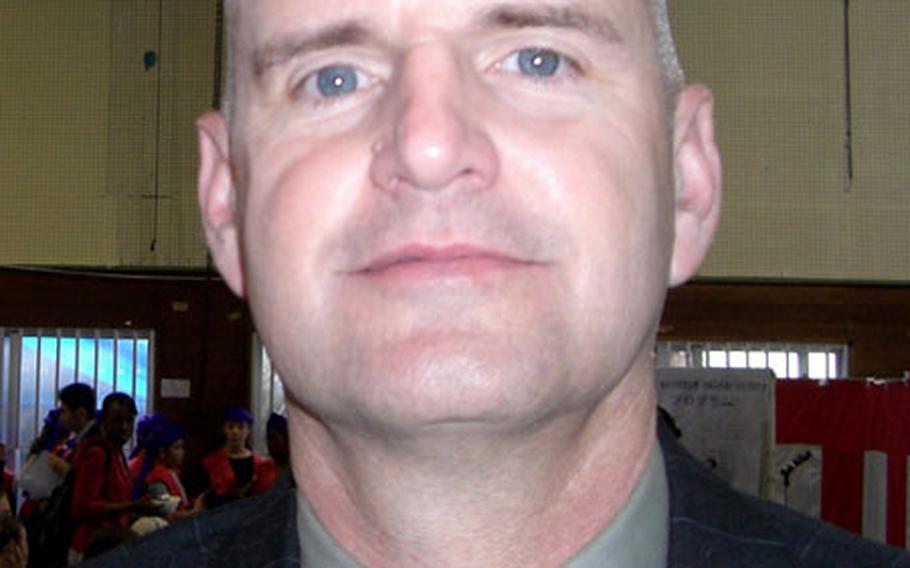 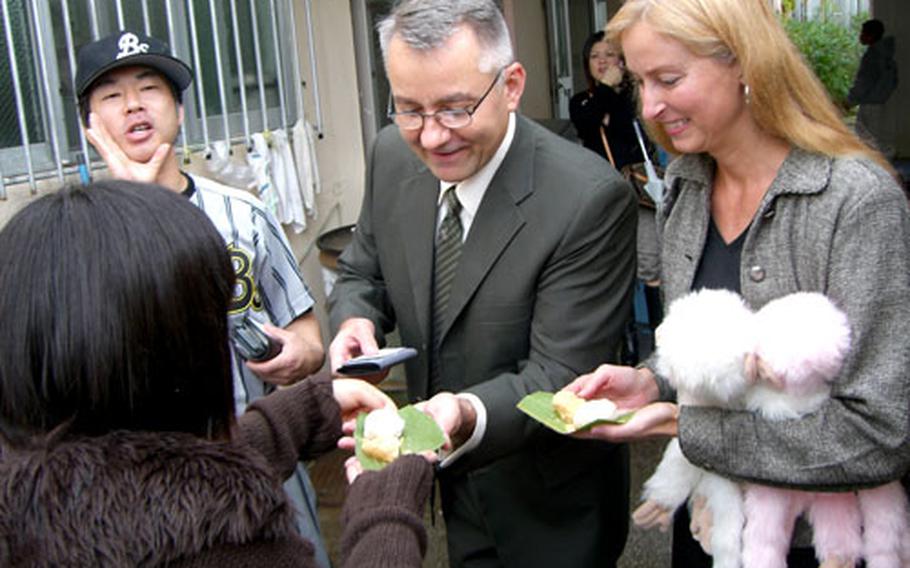 A student of Misato Children&#39;s Home offers Mochi (pounded rice cake) Sunday to her volunteer English instructors, Army Lt. Col. Timothy Tuckey and his wife, Reba, during an annual New Year party at the home in Okinawa City. The Tuckeys have been teaching English at the home for the past two years. (Chiyomi Sumida / S&S)

OKINAWA CITY &#8212; The population of the Misato Children&#8217;s Home here swelled Sunday from 49 orphans to more than 500 people, all cramming into the gymnasium for a special New Year&#8217;s party.

Many of the guests were Americans from the military community who volunteer their time to make the childrens&#8217; lives just a little bit better. Among them were Lt. Col. Timothy Tuckey, the staff judge advocate for the Army&#8217;s 10th Area Support Group at Torii Station, and his wife, Reba. Both teach English once a week at the children&#8217;s home.

&#8220;They teach us as much as we teach them,&#8221; Reba Tuckey said, smiling as three teenaged students pulled at her and her husband to walk over to where rice was being pounded into mochi, a traditional rice cake. She said she and her husband learned two years ago that the institution was looking for volunteer English instructors. They&#8217;ve been coming to the school every Monday since.

For the students, the Tuckeys are more than just teachers.

&#8220;I especially like the warm and caring atmosphere they have,&#8221; said an 18-year-old student who will leave the institution this spring to attend a vocational college in Tokyo in hopes of becoming a nursing teacher.

The Misato Children&#8217;s Home hosted Sunday&#8217;s event &#8212; which included an eisa dance performance by students from Kadena Air Base&#8217;s Amelia Earhart Intermediate School and Okinawan soba and other food made by the home&#8217;s children &#8212; to say thanks to its supporters.

&#8220;This home is supported through the good will of many volunteers and supporters,&#8221; said director Kunio Takara. Forty-nine children ages 2 to 18 live at the home. Some are orphans, while others have been removed from their families, an institution official said.

Takara said Americans&#8217; support for the home is invaluable.

&#8220;They can provide the children with something that Japanese people cannot,&#8221; he said.

The American military community is deeply involved with the home, said Hiroko Tomimura, a community relations specialist on Camp Foster.

In addition to volunteering to teach, Marines, for example, visit the institution every other month to cut grass and perform other upkeep.

&#8220;Japanese culture and American culture share one thing &#8212; children are our important legacy,&#8221; Col. Russell Jones, commander of camps Lester and Foster, said at Sunday&#8217;s event. He said that having his Marines volunteer to help the local community helps make them better Marines.