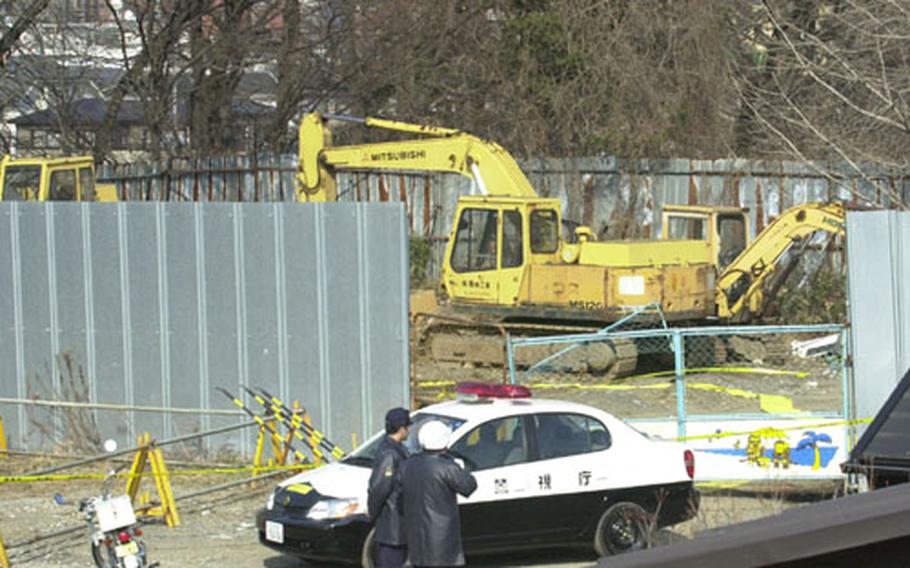 A Japanese investigator inspects a pipe used as a launcher near Yokota. (Jason Carter / S&S) After searching the grassy areas along the runway at Yokota, Japanese police head back to their buses. (Jason Carter / S&S)

Air Force Capt. Michael Braibish, a Yokota spokesman, said Japanese authorities are in charge of finding out who may have fired what he termed &#8220;improvised mortars&#8221; at the base.

Base and local Japanese residents reported two loud bangs and arcs of light near the base late Wednesday night. Police found two barrels partially buried in the ground at a construction site about 328 yards west of the base. Both were aimed toward Yokota.

&#8220;The investigation is ongoing, and base security officials are working closely with Japanese authorities to ensure that security is where it needs to be,&#8221; he said.

A Fussa city police official said Thursday it&#8217;s &#8220;hard to say&#8221; whether the firing tubes found at the construction site looked similar to one discovered in a Zama city park last November.

A projectile was launched Nov. 18 over Camp Zama, striking a house near the installation.

The launchers in Wednesday&#8217;s incident were also very similar to ones discovered near a Japanese Defense Agency building in Tokyo on Tuesday, the official said.

The twin launchers were up on blocks on the Tokyo Chinese School grounds nearby. Police said the wired launchers may have been in place up to a month. Reportedly, they were equipped with a timing device. The official said similar wiring was found on the launcher near Yokota.

But &#8220;because no one claimed responsibility, we can&#8217;t say for certain&#8221; the same individuals were involved in any of the incidents, a Fussa police spokesman said.

Toshiyuki Shikata, a professor of security and crisis management at Teikyo University, said based on what police discovered, he suspects a radical left-wing group is responsible.

He said anti-war sentiments currently being expressed around the world may be motivating them. &#8220;Only during this kind of mood can they make this appeal,&#8221; he said.

Shikata declined to speculate whether the same group that claimed the incident in Zama carried out this incident. He did suggest, however, that Japanese left-wing groups likely are not sympathetic to North Korea.

Scores of Japanese police joined Yokota security officials Thursday morning to scour the base grounds for any projectiles.

The Fussa police official said as of Thursday afternoon, no projectiles had been found but the search was continuing.

Capt. John Haynes, a Misawa Air Base spokesman, said a review of last night&#8217;s police blotter indicated no reports of unusual activity near that installation, which is 375 miles north of Yokota. Kadena Air Base officials on Okinawa also reported no unusual occurrences during the night.

Judith Bryan, a U.S. Embassy spokeswoman, said Thursday they had no official statement or any special warnings for U.S. citizens in Japan in the wake of this incident.

Base force-protection levels have not increased. Braibish said he could not discuss any additional security measures.

&#8220;Of course, we always assess the security environment and employ a wide array of security options,&#8221; he said.