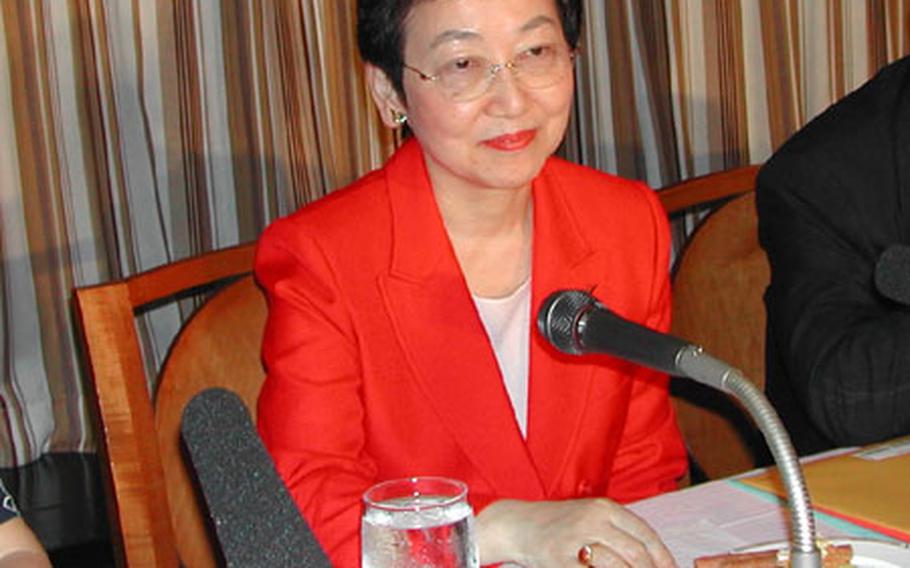 TOKYO &#8212; Japanese Foreign Minister Yoriko Kawaguchi assured the international community Wednesday that Japan has no intention of acquiring nuclear weapons, countering speculation that the prospect of a nuclear-armed North Korea might lead Japan to build or buy the weapons for self-defense.

Japan also should have a more prominent role in the U.N. Security Council, Kawaguchi told members of the foreign press during a news conference.

The six-nation talks, featuring representatives from the United States, Japan, South Korea, Russia, China and North Korea, are aimed at producing a resolution to the standoff over Pyongyang&#8217;s nuclear ambitions. The three-day session began Wednesday morning, Kawaguchi said, when each nation&#8217;s envoy took a seat around a hexagon-shaped table and, in alphabetical order, delivered an opening speech.

North Korea has said it wants a security guarantee and aid before giving up its nuclear-weapons program.

&#8220;Whatever outcome &#8230; whatever form that takes, we know that the U.S. will not do something that would jeopardize our alliance relationship,&#8221; said Kawaguchi, who declined to elaborate on the opening day of the talks.

She also dismissed the possibility of Japan acquiring nuclear weapons. &#8220;Japan has [an] international commitment and domestic policy&#8221; not to possess nuclear weapons, she said.

&#8220;We have chosen not to be a member of the nuclear club by joining NPT,&#8221; said Kawaguchi, referring to the Treaty on the Non-Proliferation of Nuclear Weapons, established in 1970.

Kawaguchi also talked about Japan&#8217;s future involvement with the international community and called for U.N. reform.

&#8220;Reform of U.N. Council should therefore be considered by all member states as a crucial step for the enhancement of the United Nations&#8217; overall legitimacy as we try to achieve common goal and stability of the world,&#8221; Kawaguchi said.

She criticized the U.N. Security Council&#8217;s role prior to the U.S. military intervention in Iraq, saying it &#8220;could not come to meeting of minds,&#8221; forcing Japan to work with other countries through outside channels.

&#8220;When the reform of the Security Council is realized, Japan would like to assume greater responsibility as a permanent member of the council,&#8221; she said.