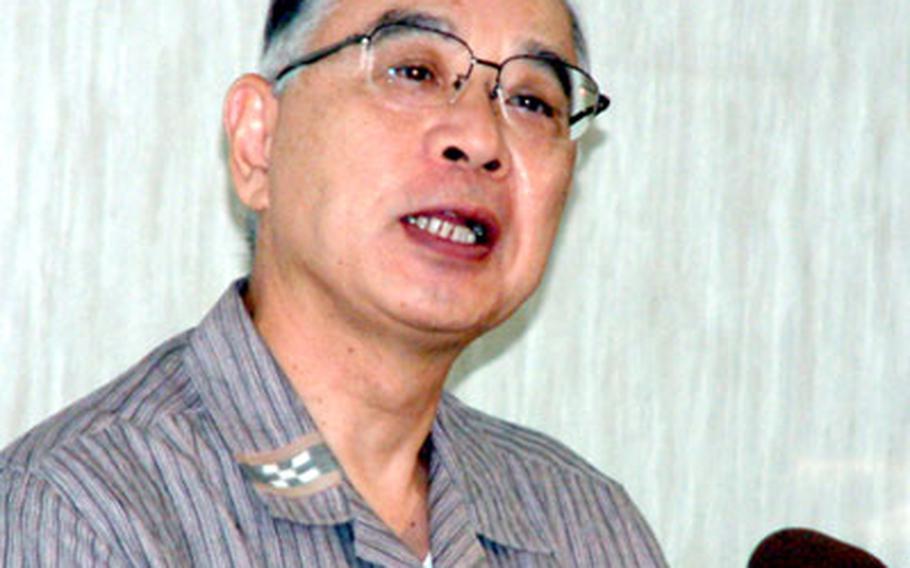 Yuji Miyamoto, special ambassador in charge of Okinawan affairs for Japan’s Ministry of Foreign Affairs, responds to reporters’ questions during a Friday news conference in Naha as he called for better notification of live-fire exercises. (David Allen / S&S)

During his regular monthly news conference, Yuji Miyamoto, the Ministry of Foreign Affairs&#8217; ambassador in charge of Okinawan affairs, said such detailed notifications could go far in reducing the concerns of residents who live near training areas, especially a new urban warfare training complex on Camp Hansen&#8217;s Range 4.

At present, U.S. Forces Japan gives Japan&#8217;s Defense Facilities Administration Agency a week&#8217;s notice that training is scheduled for a certain time period, but specific dates and times are not announced.

&#8220;The Ministry of Foreign Affairs is making an effort to increase the transparency of (the) training schedule for Range 4,&#8221; Miyamoto said. &#8220;I believe that the issue is currently being discussed in Tokyo.&#8221;

Responding to a Stars and Stripes query, a Marine spokesman said that &#8220;as a matter of policy, we do not discuss specifics involving the times and locations of personnel on training facilities due to force protection concerns.&#8221;

In July, residents of the Igei community of Kin, who have been staging daily protests against the training facility at Camp Hansen&#8217;s main gate since May 2004, say they were inadequately informed of the beginning of live-fire training at the range.

The residents claim the Range 4 complex is too close to their community. The nearest homes are 328 yards from the fence line, and when training is conducted the area reverberates with gunfire and explosions.

Despite assurances that necessary safety precautions are being taken, residents have said they fear stray bullets could pose a danger.

Japan plans to build a new training complex in a more remote area of Camp Hansen to replace the Army-funded Range 4 facility. The complex cost $3.8 million and was designed for the Army&#8217;s Special Forces.

Until the new facility is built, the newly opened Range 4 facility will be used, officials have said.

The next training date for the facility started Monday and was to continue through Sunday, according to a spokesman for the DFAA&#8217;s Bureau in Naha. He said the agency received a training notification from the Marine Corps on July 22.

&#8220;Details of the training, including specific dates and hours, were not available because it involves the operation of the military operations,&#8221; he said.

A spokesman for the Ministry of Foreign Affairs&#8217; Status of Forces Agreement Division in Tokyo confirmed that the ministry is currently discussing the issue of more detailed notifications with U.S. Forces Japan.

&#8220;To alleviate the fears of local community concerning live-fire training at Range 4, we are currently negotiating with the military to see if it would be possible to provide the local community with more information,&#8221; the spokesman said.