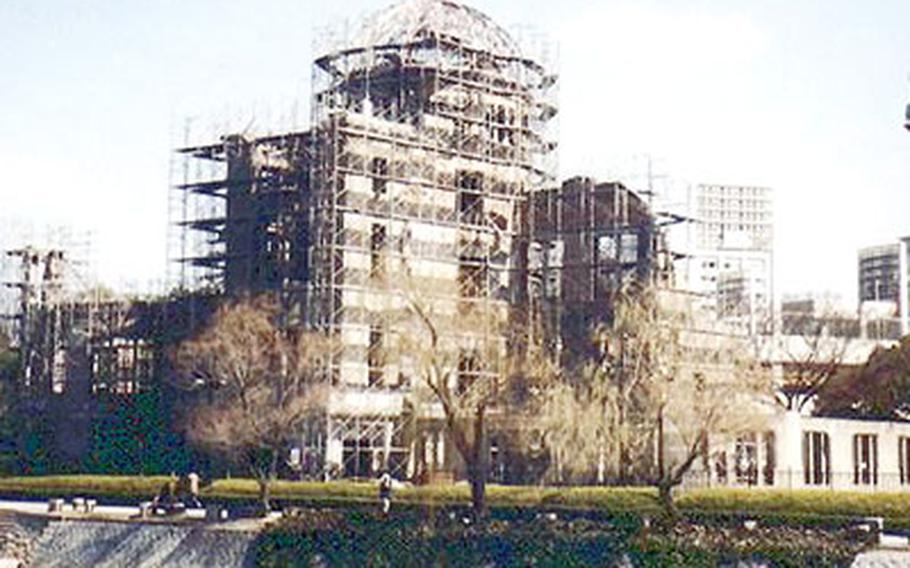 The Atomic Bomb Dome was one of the few structures not leveled in the immediate area of the Hiroshima atomic bomb’s blast on Aug. 6, 1945. The Hiroshima building is about 220 yards from the hypocenter and now serves as a memorial. (S&S file photo)

&#8220;Iwakuni City is planning several events &#8230; associated with the commemoration of World War II,&#8221; an Iwakuni Defense Facilities Administration Office official said Tuesday. &#8220;These events &#8230; are set times for moments of silence by Iwakuni citizens to commemorate the victims, while praying for world peace.&#8221;

Maj. Stewart Upton, air station spokesman, said the base would &#8220;of course&#8221; comply with the requests.

The United States dropped an atomic bomb on Hiroshima, about 35 miles northeast of Iwakuni, on Aug. 6, 1945, immediately killing an estimated 80,000 people. The city will sound sirens for one minute at 8:15 a.m. on Saturday in remembrance of the bombing.

The same gesture is planned for 11:02 a.m. Tuesday to remember the estimated 100,000 immediate atomic bomb victims in Nagasaki, about 40 miles southeast of Sasebo in southern Japan.

Also planned later this month are two other one-minute observances.

Events that occurred as the war ended were tragic, Upton said.

&#8220;So, we empathize with our hosts and will maintain the requested respect for the times of memorial expressions and prayers for world peace. World peace, of course, is a mutual desire,&#8221; he added.

For several years, the air station has encouraged personnel to avoid Hiroshima on and around the annual atomic bomb anniversary, Upton said.

&#8220;And if they go anyway and see groups formed &#8230; maybe in protest, or to remember victims &#8230; personnel visiting should not engage any of those individuals and just move on, minding their own business,&#8221; he added.