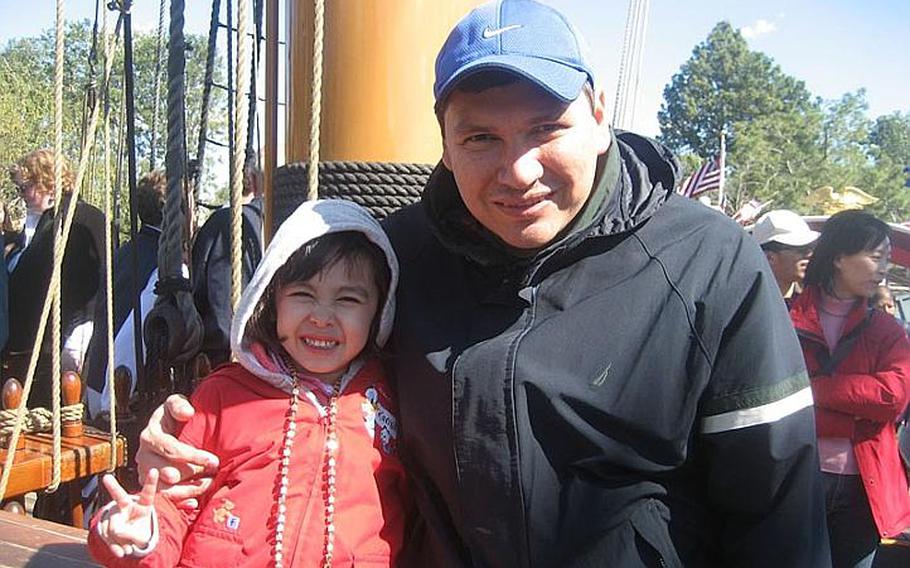 Moises Garcia and his daughter, Karina, then 6, are pictured in January 2008 at Walt Disney World in Orlando, Fla. The girl's mother, Emiko Inoue, pleaded no contest Nov. 21, 2011, to felony child custody interference by a parent for fleeing America with her daughter in 2008 rather than face a divorce and custody battle. (Courtesy of Moises Garcia)

Moises Garcia and his daughter, Karina, then 6, are pictured in January 2008 at Walt Disney World in Orlando, Fla. The girl's mother, Emiko Inoue, pleaded no contest Nov. 21, 2011, to felony child custody interference by a parent for fleeing America with her daughter in 2008 rather than face a divorce and custody battle. (Courtesy of Moises Garcia) 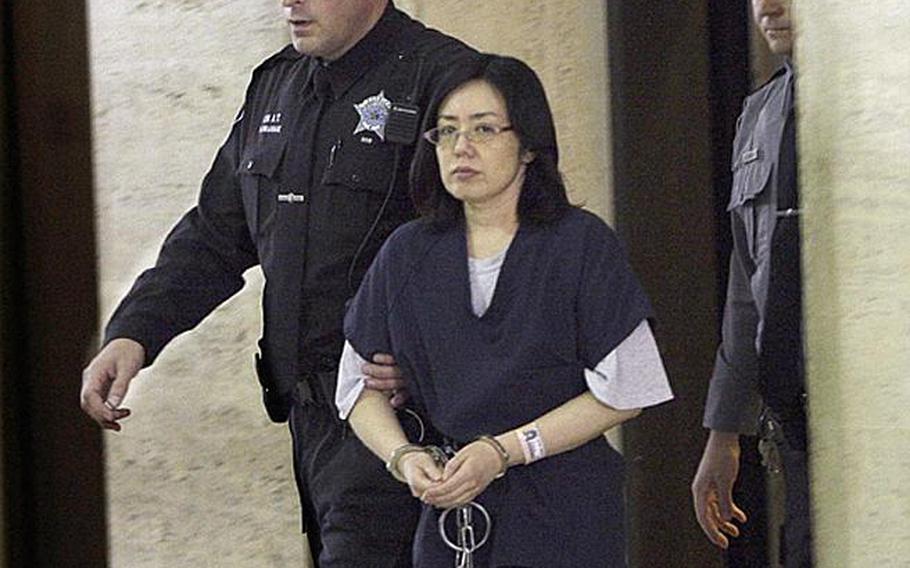 Emiko Inoue, the 43-year-old Japanese woman charged with unlawfully taking her daughter to Japan in 2008, a violation of U.S. custody orders, is escorted into a Milwaukee County court on Nov. 21, 2011. Inoue made a plea deal that will let her be released from jail if her daughter is returned to the States where her father lives. (Mike De Sisti/Milwaukee Journal Sentinel)

YOKOTA AIR BASE, Japan &mdash; Emiko Inoue was given a choice by Milwaukee prosecutors just before Thanksgiving: Return your daughter to the U.S. in 30 days, or risk spending the next 25 years in prison.

For now, she sits in a county jail cell waiting for her daughter to return from her home in Japan.

Inoue, 43, pleaded no-contest Nov. 21 to felony child custody interference by a parent for fleeing America with her daughter in 2008 rather than face a divorce and custody battle with her then husband, Moises Garcia.

Inoue took Karina, 6 at the time, to her native Japan &mdash; significant because it is one of the few developed countries that has yet to ratify the 1980 Hague Convention on Civil Aspects of International Child Abduction. It meant Garcia, 39, couldn&rsquo;t compel the Japanese government to return Karina to the U.S., even after he won full custody in U.S. and Japanese courts.

About 300 American children are currently considered abducted in Japan by a parent or family member, according to the U.S. State Department. Some include the children of current and former U.S. servicemembers who have been stationed in Japan.

And while Inoue is not the first Japanese person to abscond with a child to Japan, she is the first to be prosecuted for it in the U.S. according to the Japanese Ministry of Foreign Affairs.

After three years and only one visit with Karina in Japan, Garcia caught a break.

In April, his ex-wife flew from Japan to Hawaii to renew her U.S. green card, apparently unaware that her U.S. immigration file had been flagged because of a Wisconsin arrest warrant issued a few months earlier. Inoue was arrested in Honolulu and extradited to Milwaukee, a city she once called her home, where Karina was born and she and Garcia were married in 2002.

The couple met in Norway in 1998 while both were studying abroad. Garcia, a native of Nicaragua, was pursuing medicine. Inoue, from Japan, was studying the Norwegian language. Garcia was about to begin a medical fellowship in Japan later that year.

By the time Garcia was wrapping up his fellowship and accepting a residency program in Milwaukee, Inoue was pregnant. The couple decided to start a life together in America.

&ldquo;It was difficult,&rdquo; said the physician, who practices and lives in Fox Point, Wisc., just outside Milwaukee. &ldquo;But we had many good moments.&rdquo;

Even after the couple began having marital problems, Garcia said he never thought Inoue would run away with their daughter.

But she did -- the day after Garcia filed for divorce in February 2008, and before the family courts could flag her and her daughter&rsquo;s passports as possible flight risks.

Her decision to circumvent U.S. family court set in motion an unprecedented criminal case, making her the first Japanese citizen ever to be arrested in the U.S. for child custody interference. It&rsquo;s a felony in most states, but not considered a crime in Japan.

The U.S. and other countries for years have pressured Japan to sign an internationally recognized treaty to help prevent such cases and to better resolve them when they happen.

Japan agreed in principle to ratify the 1980 Hague Convention on Civil Aspects of International Child Abduction in May but has yet to sign it or help restore parental rights to hundreds of foreigners whose children have been spirited away to Japan.

Japan&rsquo;s tradition of sole-custody divorce typically favors mothers and results in children being cut off from their fathers, during childhood if not forever. Japanese family courts in recent years have begun issuing joint custody orders, but do not effectively enforce them. There are no legal penalties for noncompliance.

Garcia gained full custody of Karina shortly after Inoue left the country in 2008. Eventually, he was granted full custody by a Japanese court, although it reversed that decision in March of this year, saying it was in the best interest of the child to remain in Japan since she was already living here.

Garcia convinced the Milwaukee prosecutor&rsquo;s office that although he had legal custody in both countries, there was no way for him to get his daughter back or even get regular visitation

The Milwaukee police department issued a warrant for Inoue&rsquo;s arrest in February 2011, although Japan has never agreed to extradite any of its citizens to face felony parental child abduction charges in the U.S.

Bridget Boyle-Saxton, Inoue&rsquo;s attorney in Wisconsin, would not comment on why Inoue chose to leave Wisconsin so quickly after Garcia filed for divorce. It is unclear whether Inoue knew of the custody protections in Japan before she took Karina there.

Inoue has been in the Milwaukee County jail since arriving from Hawaii.

Instead of going to trial and risking 25 years in prison if convicted of two charges related to her leaving the States with Karina, she decided to plead no-contest to parental custody interference.

If Karina is returned to Wisconsin by Dec. 21, Boyle-Saxton said, Inoue will be released from jail. The case will be held open for three years, after which her conviction will be reduced from a felony to a misdemeanor under the terms of the deal.

Inoue will be allowed to remain in the U.S. instead of being deported for having a felony conviction. And she can travel outside of the country with permission from the court, but likely not with her daughter, Boyle-Saxton said.

&ldquo;I believe that ultimately there&rsquo;s going to be some harmony that&rsquo;s worked out&rdquo; between Garcia and Inoue regarding Karina, she said.

Inoue only &ldquo;very reluctantly&rdquo; agreed to the deal, because her daughter wishes to remain in Japan, Maeda said.

&ldquo;Under the plea bargain made at a U.S. court this time, the child will be sent back to her father, who is now remarried. Separating her from her own mother and (forcing) her to live with her father and stepmother, will this lead to the well-being of the child?&rdquo;

When Karina turns 12, she can tell a U.S. judge where she wants to live, Boyle-Saxton said. Until then, she is considered not intellectually competent by the court to make a decision.

Garcia, 39, has arranged for a Japanese tutor at the school Karina will attend and for psychological counseling to help her cope with the transition.

As of Thursday, arrangements for Karina&rsquo;s return had yet to be confirmed.